Meeting resident needs in the North End of Newport

Smart Growth America and the North End Local Advocacy Group co-created the North End Equitable Development Strategy (NEEDS) to serve as a roadmap for equitable development in the North End neighborhood of Newport, Rhode Island.  The NEEDS evolved over months of collaboration and is intended to advance policy changes that will make their neighborhood a place where everyone can thrive.

With a development plan in place, change was coming to the North End neighborhood of Newport, Rhode Island. And changes were needed; over the last 50 years, the neighborhood suffered from decline and neglect, due in part to an urban renewal bridge project that cut off the community from the rest of Newport. The problem was, that plan didn’t take into account the residents who were already living there or how they might be impacted by the changes called for in the plan.

The plan, officially known as the North End Urban Plan (NEUP), was created in 2021 and is the most recent effort to chart the North End’s future. The plan doesn’t waste time in revealing its motives, dubbing the North End as “Newport’s last economic development opportunity neighborhood.” Overlooked by decision-makers, North End residents came together to be sure that their voices were included in any changes coming to their community—securing more equitable outcomes in the process. The North End Equitable Development Strategy (NEEDS) is the culmination of their efforts to build strategies that will advance policy changes to make their neighborhood a place where everyone can thrive. 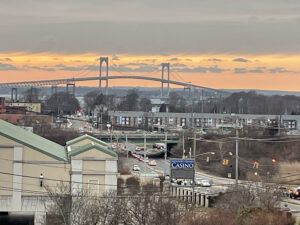 “I’m thrilled to see North End residents’ priorities outlined so clearly and I’m hopeful the NEEDS will guide the redevelopment in a way that allows the residents’ vision becomes a reality. It’s time for the existing community to be centered as these big changes happen.” – Rex LeBeau, Strategy Specialist at Newport Health Equity Zone

North End residents were driven to action because the NEUP felt like it was done about them or to them rather than with them. Nearly 18 months ago, North End community leaders formed the Local Advocacy Group (or LAG), in partnership with the Newport Health Equity Zone and with guidance from Smart Growth America, started the hard work of building an equitable development strategy for the North End.

To begin the process of creating an equitable development strategy, the LAG dedicated themselves to gathering opinions from across their community, ensuring that as many voices as possible would be included in the development decisions that would impact their neighborhood’s future. The data collected was workshopped and refined and resulted in six key priorities:

With the community priorities set, the LAG worked with SGA to develop short- and long-term action plans to accomplish these priorities and work toward equity in the city’s development plans. After months of work, these action plans coalesced into the North End Equitable Development Strategy, which is intended to serve as a roadmap to implement the NEUP, according to the North End residents’ priorities for equitable development.

“These concerns affect all of Newport, these zoning amendments for the North End, you have the opportunity to be bold and to show the way for the future when it comes to making cities and towns livable for year-round residents.” – Aida Neary, North End resident and LAG Member

An Early Win for Equitable Development in the North End

For the LAG, two early wins came in the form of the City Council adopting LAG-proposed zoning amendments and the awarding of the GrowSmartRI Smart Policy Award. For more than a year, Smart Growth America, and consultants worked with North End neighbors to draft a set of zoning amendments, which Newport’s City Council unanimously approved in May.

“The residents’ priorities and associated strategies, when implemented, will result in a healthier, more resilient community. We know that these are also factors that prevent domestic violence in the long term, so we truly see this as a first step toward a future free from violence for Newport.” – Jessica Walsh, Executive Director, Women’s Resource Center

The codification of the resident-proposed Zoning Amendments sends a powerful message that the North End’s suggestions aren’t just lofty goals and aspirations; these priorities must be adhered to and addressed when developing in the North End.

“Having the NEEDS released is such a considerable accomplishment for those of us that have put years of knowledge into it. Knowing that our voices will be heard.” – Phyllis Mulligan, North End resident and LAG member