A decade of lessons on good zoning 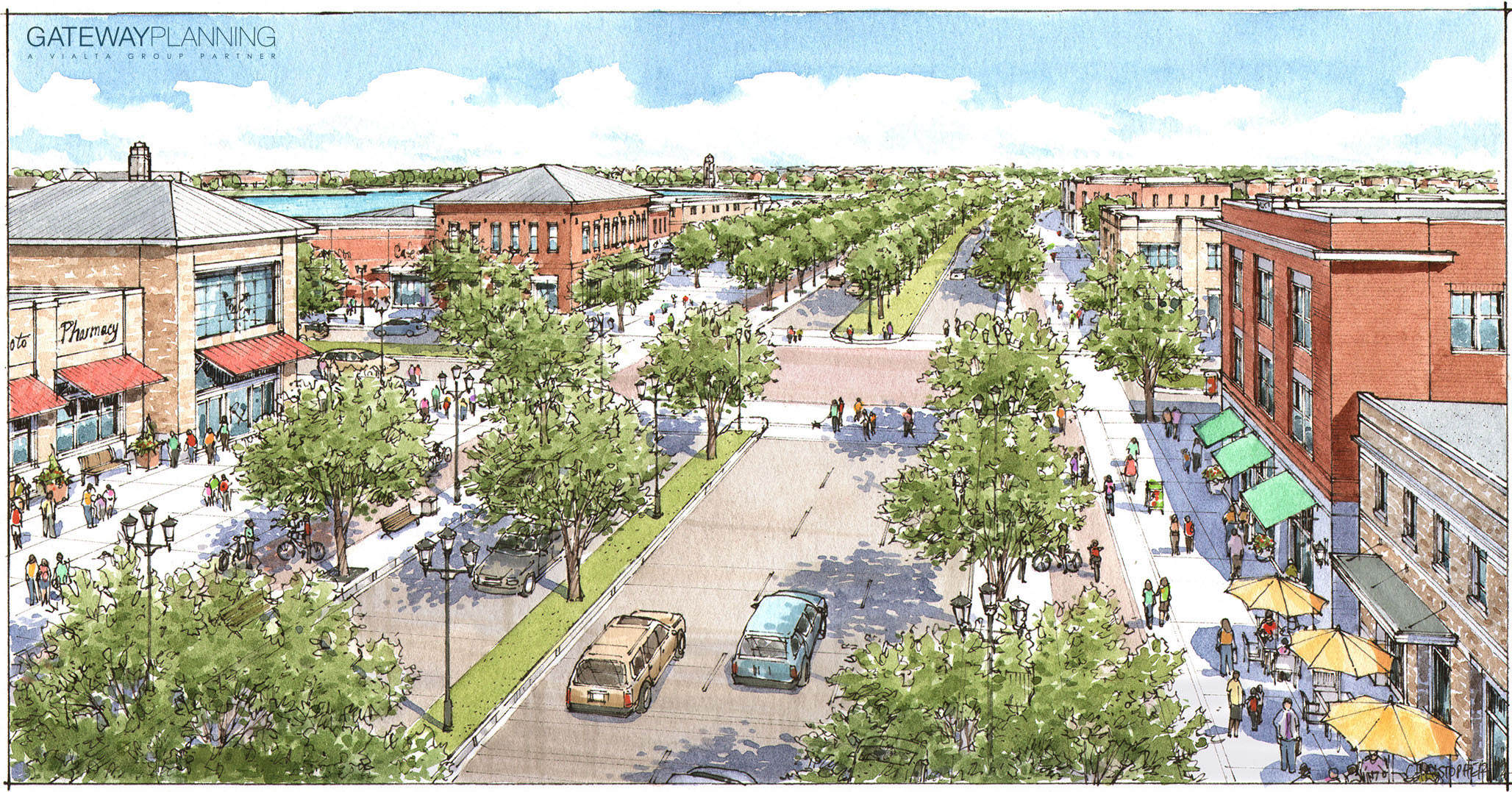 Trinity Boulevard in East Fort Worth is currently a highway but will serve as a town center. Rendering courtesy Gateway Planning.

The Driehaus Form-Based Codes Award has recognized exemplary form-based codes since 2008. Looking back at all the submissions over the years—more than 100—reveals how the practice of form-based coding has matured and evolved. Driehaus juries have noted that the quality of submissions has improved since the early years and that municipal planning staff are increasingly engaged in drafting codes for their communities. It’s clear that form-based codes are becoming a popular framework for smart growth and that, in many contexts, they are increasingly paired with policies to achieve more equitable development.

Each spring, for more than a decade, the jury for the Richard H. Driehaus Form-Based Code Award meets to select exemplary form-based codes as models for other communities to follow. They discuss what makes a great form-based code and debate the potential for each submission to effectively carry out a community’s vision of more walkable, people-scaled growth.

The jury also considers what each crop of nominees says about the evolving practice of form-based coding—the progress made and challenges faced. Here’s what we have learned to date.

In the early years of the program, the jury thumbed through up to 20 submissions as communities eagerly demonstrated attempts to reform their zoning. But most of the submissions seemed to fall short of the fundamental principles of form-based codes—ease of use, increased predictability, and the creation of a superior public realm. Many early submissions had some form-based elements, but largely retained too many of the features of the codes they were intended to replace: too much complexity, a burdensome administrative and review process, and an over-dependence on detailed use categories.

In more recent years, the jury has been presented with fewer submissions but the quality is significantly higher, as evidenced by close adherence to Form-Based Codes Institute Standards of Practice. These trend demonstrates that communities, and some of their coding consultants, are clearly starting to master the practice. Planning staff and municipal leaders are simplifying standards for what goes on inside buildings and instead using form—the scale and placement of buildings, streets, and blocks—and the character of the public realm, including open spaces, to fulfill community aspirations.

Modern form-based codes were first developed for greenfield sites or large-scale master planned communities. Drafting codes in these contexts was more straightforward. The code didn’t have to account for existing development or be coordinated with other public policies and objectives. These regulations faced limited political opposition because they needed to meet the expectation of a master developer and local authorities but not as many existing residents and businesses.

Today, the submissions cover a variety of contexts from industrial districts to historic downtowns to citywide codes. They are designed to spur redevelopment in old downtowns, retrofit autocentric suburbs, or help preserve the character of a rapidly growing historic district—sometimes all in one code. Coding in these contexts is much more complicated than in an undeveloped greenfield site, and it’s exciting to see communities using form-based codes to create walkable, human-scale places where underutilized or sprawling development formerly existed.

Left: Las Vegas, NV hosted a series of FBCI courses in 2017 and 2018 to get planning staff, developers, and other stakeholders up to speed on their new form-based code covering downtown’s 12 districts. (Image: VisionLV) Right: An FBCI course in Punta Gorda, FL shows participants the placemaking potential of form-based codes by using building form and public space standards within a regulating plan. (Staff photo)

Municipal staff take on more of the coding

Up until 2015, virtually every adopted form-based code was written by a urban design or coding consulting firm. Rarely were municipal planners up to the task of updating their decades-old zoning code using form-based principles. Few had the ability—or the guts—to write regulations that could organize future development based on urban form rather than siloed uses like single-family, industrial, or commercial. In almost all instances, consultants were recruited to design and lead the process—from community engagement through adoption—ultimately handing off a shiny new form-based code to staff who may or may not have been sufficiently ready to administer it.

Local planners in some communities are now bridging the knowledge gap and playing a more significant role in visioning, supervising the preparation or actually drafting the ordinance, and implementing the code. Skilled planning staff in Nashville, TN and Beaufort, SC developed Driehaus Award winning form-based codes with key guidance from outside professionals. Often, consultants step into a more advisory role by helping draft model codes that can be replicated by staff in other districts—as in Las Vegas—or provide graphic support for a staff-drafted code. Even when entire codes are drafted by consultants, municipal staff now play a greater role in coordinating public participation, setting expectations, and providing oversight.

FBCI continues to track and contribute to education through its three-class curriculum designed to bring more local staff and leadership up to speed on the principals, applicability, and elements of form-based codes.

Zoning for equitable development continues to be a challenge

As form-based codes mature and diversify, communities are also working to ensure equitable development. For many years, zoning has been used to segregate people by income, race, or ethnicity. This legal and institutional segregation continues in many places across the country up to the present day. While no zoning code—form-based or otherwise—can fully mitigate displacement or guarantee shared prosperity on its own, form-based codes are better positioned to address these challenges, particularly when combined with other policies. What’s important is being intentional and explicit about equity. A form-based code that pays serious attention to its potential impacts on equity and development can work synergistically with relevant policies to guide future growth so that all residents benefit.

Communities across the country are only beginning to discover the versatility of form-based codes. Over the years, FBCI has recognized model codes for entire counties that span rural farmland to busy urban streets, like the Beaufort County Community Development Code. Winners have included mixed-use transit nodes—like the TOD Code for Leander, TX—and unique areas with medical campuses and historic neighborhoods—like the Near Southside form-based code in Fort Worth, TX. In each case, the code remains true to the fundamental principles that make form-based codes so attractive to begin with—ease of use, predictable and streamlined development, and the creation of a high quality public realm.

FBCI’s standards of practice provide flexibility to respond to many different contexts. While they are not a silver bullet to solve every planning problem, more and more form-based codes are being used as the regulatory framework to create more walkable, sustainable, equitable, and beautiful communities.

Authors: George Proakis, AICP is the Executive Director of the Mayor’s Office of Strategic Planning and Community Development in Somerville, MA and a member of the Steering Committee of the Form-Based Codes Institute at Smart Growth America. He is the chair of this year’s Richard H. Driehaus Form-Based Codes Award Jury.

Marta Goldsmith is Director of the Form-Based Code Institute at Smart Growth America.