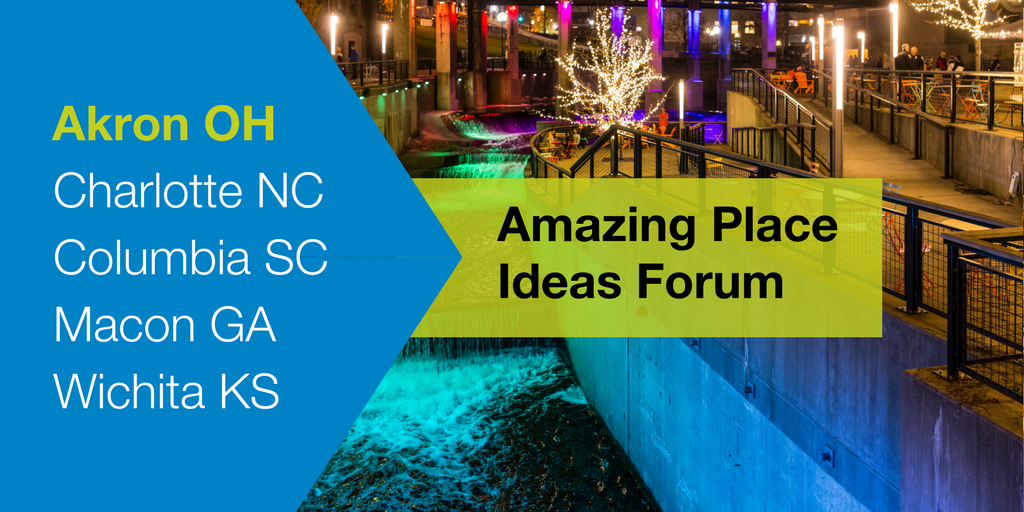 We’re bringing five U.S. cities together at the Amazing Place Ideas Forum, an innovative, experiential event that’s all about placemaking as the core of an economic development strategy. As we, along with the John S. and James L. Knight Foundation, get ready for the Forum next week, learn about each of the participating cities in our #AmazingPlaceForum blog post series. Find out what Akron has been up to, and what they hope to gain from the Forum.

Updated 8/28/2017: With The Amazing Place Ideas Forum getting underway this week, we corralled all of the related resources in one place for those interested in following along and learning more during the Forum. Read the full report, find out how to follow along online, and read the profiles of the other four participating cities here.

“Akron is rediscovering itself — we’re changing, growing, and evolving,” said Bronlynn Thurman, Akron Program Associate at the Knight Foundation, and member of the Akron leadership team heading to next week’s Amazing Place Ideas Forum. “We have a vision for where our city can go, and we’re excited to learn from cities that have employed placemaking strategies with success.”

Over the last few years, Akron has adopted several initiatives to improve public spaces, encourage private investment, and attract new talent to the area. With help from the Knight Foundation, Akron is activating its canal trails, creating a long-range strategy for development, and finding dynamic and creative ways to engage its diverse community members.

Take for example, the Better Block Festivals, a two-day event that “empowers residents to reshape and reactivate their neighborhood environment, while featuring what’s great about their community.” This year’s festival, set for late summer, will create temporary public installations to help residents visualize how underutilized parts of the Kenmore neighborhood could be transformed into vibrant destinations. Residents, business and property owners, and other community stakeholders are invited to introduce temporary public plazas, buffered bike lanes, and pop-up shops in spaces that are otherwise vacant or neglected. Previous Better Block Festivals featured bocce courts, parklets, an outdoor beer garden, ping pong tables, and a culinary showcase of Akron’s ethnic cuisines.

The Exchange House, another initiative of Better Block and Knight, is a cultural hostel in the city’s international neighborhood that also serves as a gathering place for Akron’s refugee and immigrant communities. The project was designed “to tap the entrepreneurial potential of the neighborhood’s growing Bhutanese population. The second-floor hostel will generate revenue, which will support programs on the ground floor.” Opened in February 2017, Exchange House offers programming specifically designed for North Hill’s refugees and immigrants that includes “healthcare classes, leadership workshops, concerts, English as a Second Language classes, a community garden and more.”

Plans are also underway to activate the Towpath Trail, a historic bicycle and pedestrian route along the Ohio and Erie Canal. The trail currently runs through some of the city’s most important and economically diverse neighborhoods; with a grant from the Reimagining the Civic Commons initiative, Akron hopes to better connect these areas and revitalize local gathering spots. Community activities such as bicycle and canoe share, community gardens, and cultural programming, along with wayfinding and investments in park infrastructure will better connect Akron’s central business district to Park East, a mixed housing neighborhood, and Summit Lake Park, an underutilized greenspace that is currently perceived as unsafe.

“More and more, we’re seeing Akron’s neighborhoods and grassroots organizations come together to create people-centric places,” explained Thurman. “Our leadership team [for the Forum] is made up of community leaders who wear multiple hats, who represent voices that are unique from the traditional players in economic development. Take for example, Let’s Grow Akron, a non-profit that helps run the city’s community gardens.”

Akron commits to placemaking for the long haul

The Downtown Akron Vision and Redevelopment Plan, kicked off just last year, is the city’s long-range plan to create an actionable and strategic framework for its downtown. With help from the Knight Foundation, the city has currently engaged more than 450 citizens and stakeholders in a collective decision-making planning process. Goals include the creation of great public spaces, development financing incentives, building walkable, bikeable connections, integration of Akron’s rich history, and regular downtown programming to better engage the public and bring them downtown.

Phase one of the downtown plan focused on creating a collective vision by analyzing downtown conditions and engaging a 37-member stakeholder steering committee. With the initial phase successfully completed, Akron has now moved on phase two – to turn the downtown opportunity analysis into concrete proposals for catalytic development. The Amazing Place Ideas Forum comes at an opportune time for Akron’s leadership team as they consider new ways to spur investment.

“Cities like Denver, CO that have solid transit infrastructure, that have successfully used placemaking strategies — these are the places that Akron is excited to learn from. We want to know what their challenges were, and if they were similar to ours,” explained Thurman. “We don’t necessarily want to replicate their successes, rather our goal is to draw inspiration.”

You can follow the Akron, OH cohort and the other participating cities as they take part in next week’s Amazing Place Ideas Forum at the hashtag #AmazingPlaceForum on Twitter. Be a part of the conversation as the five cities tour the host city of Denver, CO and come up with exciting new ways to advance placemaking initiatives and spur economic growth in their own communities.