Applications are open for the third round of the Active People, Healthy NationSM Champions Institute, an opportunity for local elected officials to gain the knowledge needed to effectively advocate for safer and more Complete Streets hosted by Smart Growth America (SGA) and the Centers for Disease Control and Prevention’s Division of Nutrition, Physical Activity. State DOTs have a major role to play in reversing the nation’s epidemic of pedestrian deaths. But that can be hard to do when most DOTs are still set up to build roads that prioritize high-speed car travel, even if that jeopardizes the safety of some of the people using those roads. Tennessee DOT is working to change that through a comprehensive approach to Complete Streets. 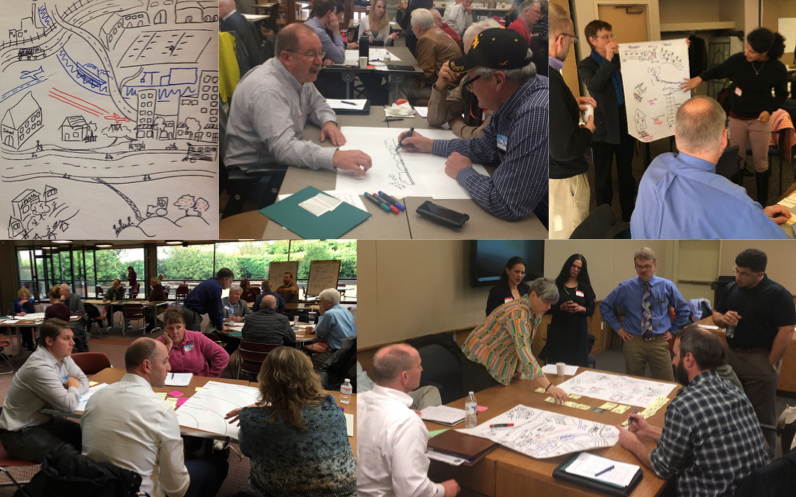 Washington is taking groundbreaking steps few other states have taken to match its transportation investments with statewide policy goals. We helped the state work with stakeholders to answer three key questions: what does economic vitality look like for the state, how does transportation impact the economy, and how do we measure that to guide decisions?

VTrans, in partnership with Smart Growth America, has unveiled a work program for revising the Vermont State Standards, which provide VTrans staff and other partners with direction in designing roadway transportation projects.

We want to make it as easy as possible to use the new guide, so Smart Growth America and our co-authors the State Smart Transportation Initiative are hosting a free webinar all about it.

Join us tomorrow, January 27, 2015 at 3:00 PM EST to learn about new features of the 2015 edition and to discuss how transportation professionals have applied the manual. Hear from panelists Billy Fields, Assistant Professor of Political Science at Texas State University; Roger Millar, Vice President of Smart Growth America and Director of Smart Growth America’s Leadership Institute; Adetokunbo “Toks” Omishakin, Deputy Commissioner/Chief of Environment & Planning at the Tennessee DOT; and Chris Spahr, SSTI Project Assistant. The speakers will highlight new features in the third edition, and how state DOTs across the country are already putting the manual into action.

Washtenaw County, MI is located immediately west of the Detroit metropolitan area, with a population of just over 350,000 residents. A former manufacturing region, the county currently houses several major institutions that are playing a growing role in shaping the region’s economy and development patterns. The seat of Washtenaw County, Ann Arbor, MI, is home to the University of Michigan, which employs more than 30,000 people and has contributed to the growth of a vibrant, walkable business and entertainment district in Ann Arbor’s downtown. The county also houses Eastern Michigan University, Washtenaw Community College, and a major U.S. Department of Veterans Affairs medical center.

While Washtenaw County has seen significant job growth over the past several years—a recent economic forecasting study estimates that between 2009 and 2016 the region will have gained 31,147 additional jobs—economic inequality is a growing challenge for the community. County Commissioner Conan Smith, a member of Smart Growth America’s Local Leaders Council, is working to address this issue by promoting economic development strategies that provide all county residents with greater access to opportunities.

A planned expansion of the Blue Line on Charlotte’s LYNX light rail system will connect the center city to the NoDA art district and University of North Carolina Charlotte Campus. Photo by Reconnecting America, via flickr.

Charlotte is the largest city in the state of North Carolina, with a metropolitan area population of 2.3 million as of 2013. Over the last half century Charlotte’s economy grew primarily around the financial sector, and as the home of Bank of America’s headquarters, the former headquarters of Wachovia, and a host of Fortune 500 companies the city was the  second largest banking hub in the country when the economic recession hit in 2008. In recent years leaders in Charlotte have worked to make the city’s economy more resilient by cultivating and expanding other industries, particularly energy, logistics, defense and healthcare.

In line with these efforts, there is a growing movement among many city leaders to provide a high quality of life in Charlotte’s unique and diverse neighborhoods, which radiate out from the historic center city, in order to attract and retain new businesses and residents and promote Charlotte as a great place to live, work and play. At-Large City Council Member Vi Lyles, a member of Smart Growth America’s Local Leaders Council, is working to provide these neighborhoods with a greater variety of transportation options to help foster a sense of community and connection to the city among residents. “We are focusing on making Charlotte a place where people want to be. To do that, we have to provide those people with choices,” says Council Member Lyles.

Cheyenne, WY is at a crossroads. As the state capital of Wyoming, the city of 65,000 residents has long represented the cultural identity and values traditionally associated with the rural American West. Yet just 90 miles north of Denver, CO, Cheyenne is also a growing participant in the economy of the Front Range region, which includes Denver, Boulder, Colorado Springs and Ft. Collins among other major and mid-sized metropolitan regions in northern Colorado.

“Residents in Cheyenne want to become a part of that growing Front Range economy, while still being rooted in the values of Wyoming,” says Cheyenne’s Planning Services Director Matt Ashby, a member of Smart Growth America’s Local Leaders Council. For Ashby, balancing these two sides of the city is about attracting new investment to Cheyenne while preserving the city’s unique character.