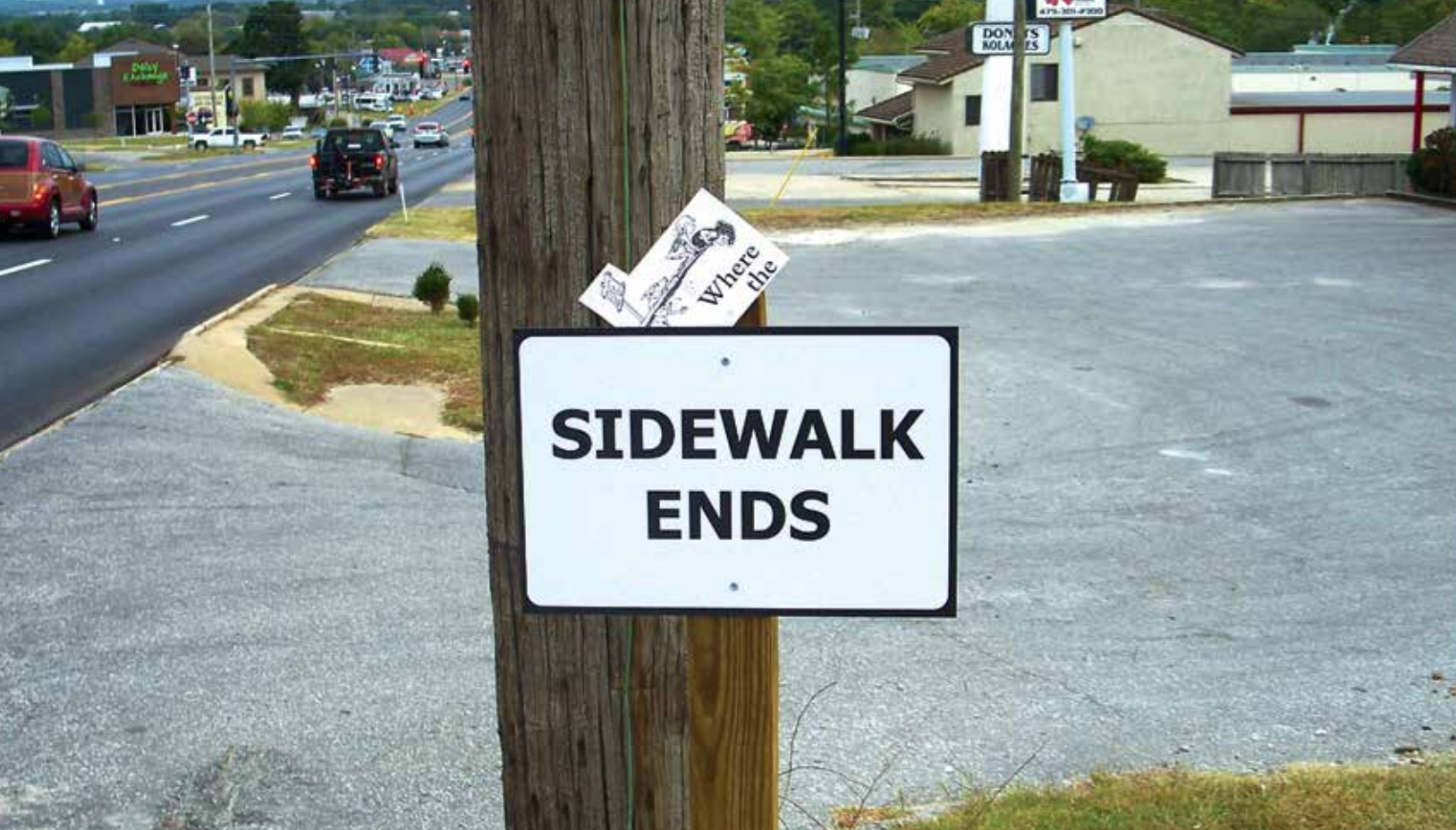 A lack of safe infrastructure for pedestrians and bicyclists creates a barrier to physical activity along a commercial corridor in Fayetteville, AR.

Designing the commercial corridors where we live, work, and shop to prioritize moving cars as quickly as possible is certainly dangerous—as chronicled in Dangerous by Design—but it also has severe consequences for health, economic viability, and equity. We collaborated with the Urban Land Institute on a new research report that measures the impact of unsafe, unhealthy corridor conditions, examines how common these conditions are across the country, and digs into what can be done to change this trend. 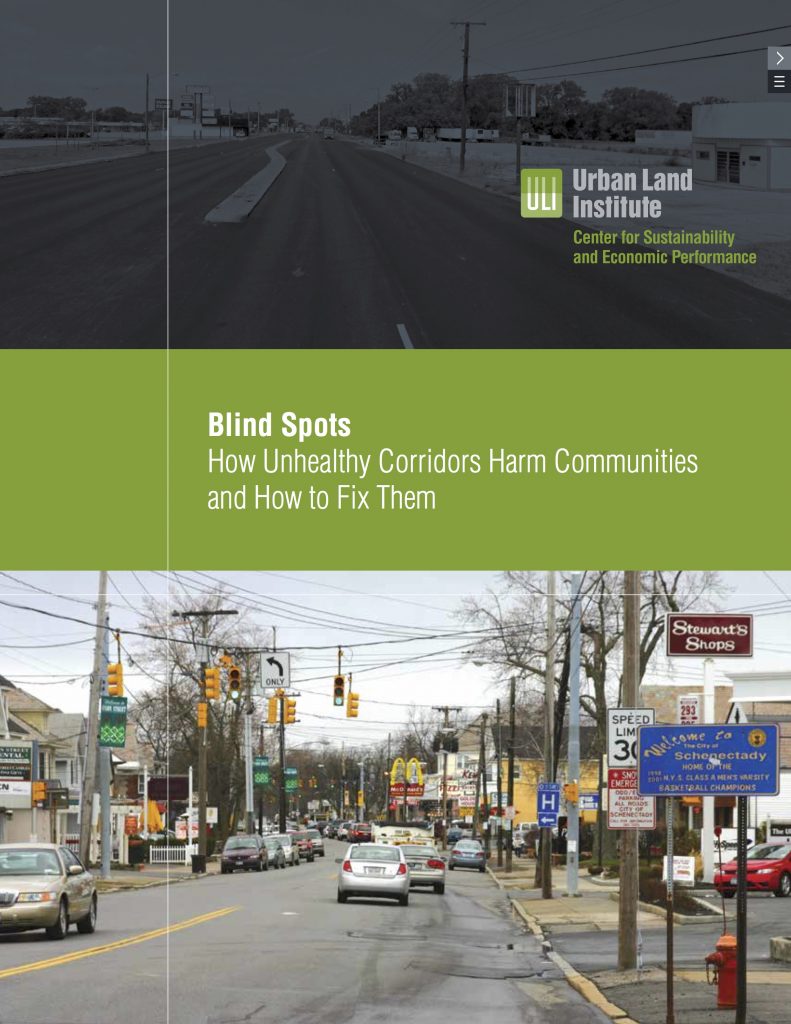 With the release of Dangerous by Design, we have shared countless examples of wide, multi-lane, high-speed roads designed to move cars as quickly as possible—often at the expense of people’s safety, or even their lives, particularly for people walking.

You can probably picture the corridors that fit this description in your community. These major roadways designed specifically to move high volumes of traffic quickly, usually fail to provide safe access to local amenities.

These conditions aren’t only catastrophic for safety (as we showed exhaustively in Dangerous by Design 2019); they’re also bad for health, economic vibrancy, and equity. To understand just how common this problem is nationwide and to measure the negative impacts on our communities and our lives, we collaborated with the Urban Land Institute (ULI) on a brand new research report about the challenges and opportunities presented by these dangerous, unhealthy commercial corridors.

“Too often we see areas where road users are unsafe and where healthy behaviors like walking, biking, socializing, and buying healthy food are all but impossible.”
– W. Edgar Walter, CEO, ULI

The study, Blind Spots: How Unhealthy Corridors Harm Communities and How to Fix Them looks at the impact of these unsafe, unhealthy corridors, why they proliferate in communities all over the country, and what can be done to change this trend. The report examines their prevalence and location, the conditions they share, and the impact they have on people’s safety, health, and access to opportunity. It also explores the land use and transportation decisions that give rise to and perpetuate their existence, as well as opportunities to use policy and practice levers to shape them into something better.

“This report confirms that far too many major roads in our communities are dangerous by design, unhealthy, and economically underperforming. These problems are interconnected and often coexist in place, so transforming these unhealthy corridors into safe, thriving places for people will require interdisciplinary and place-based solutions.”
– Calvin Gladney, President and CEO, Smart Growth America

In a collaborative research effort, the Urban Land Institute and Smart Growth America undertook an audit of corridors nationwide, providing a statistically accurate snapshot of corridor conditions and prevalence. The corridors examined are high-capacity, high-speed roads that connect highways and interstate arterials to lower-capacity roads and serve as the de facto main street in many communities around the country.

This research shows that unhealthy corridors constitute a loss to communities in terms of human life and safety, economic productivity, and transportation efficiency. 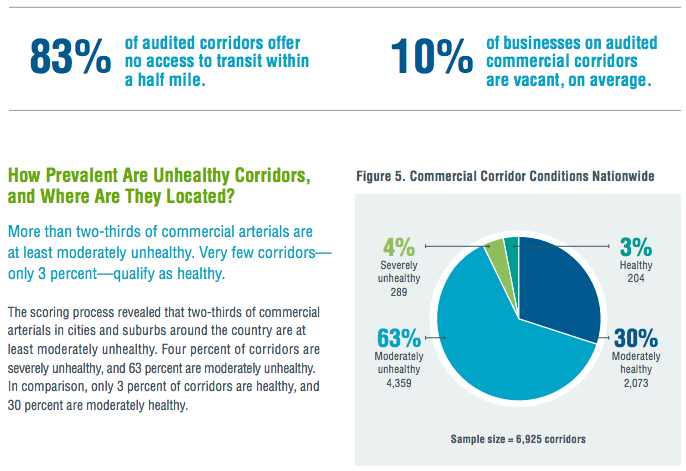 The report offers alternative approaches, including:

As this reports ultimately shows, unhealthy corridors are everywhere, and they are deadly and costly for communities. America’s dangerous and underperforming urban and suburban arterials are the country’s collective “blind spots.” But they are not inevitable. Healthier corridors are possible, if the right mix of strategies can be brought to bear.