Bringing art and culture to the street 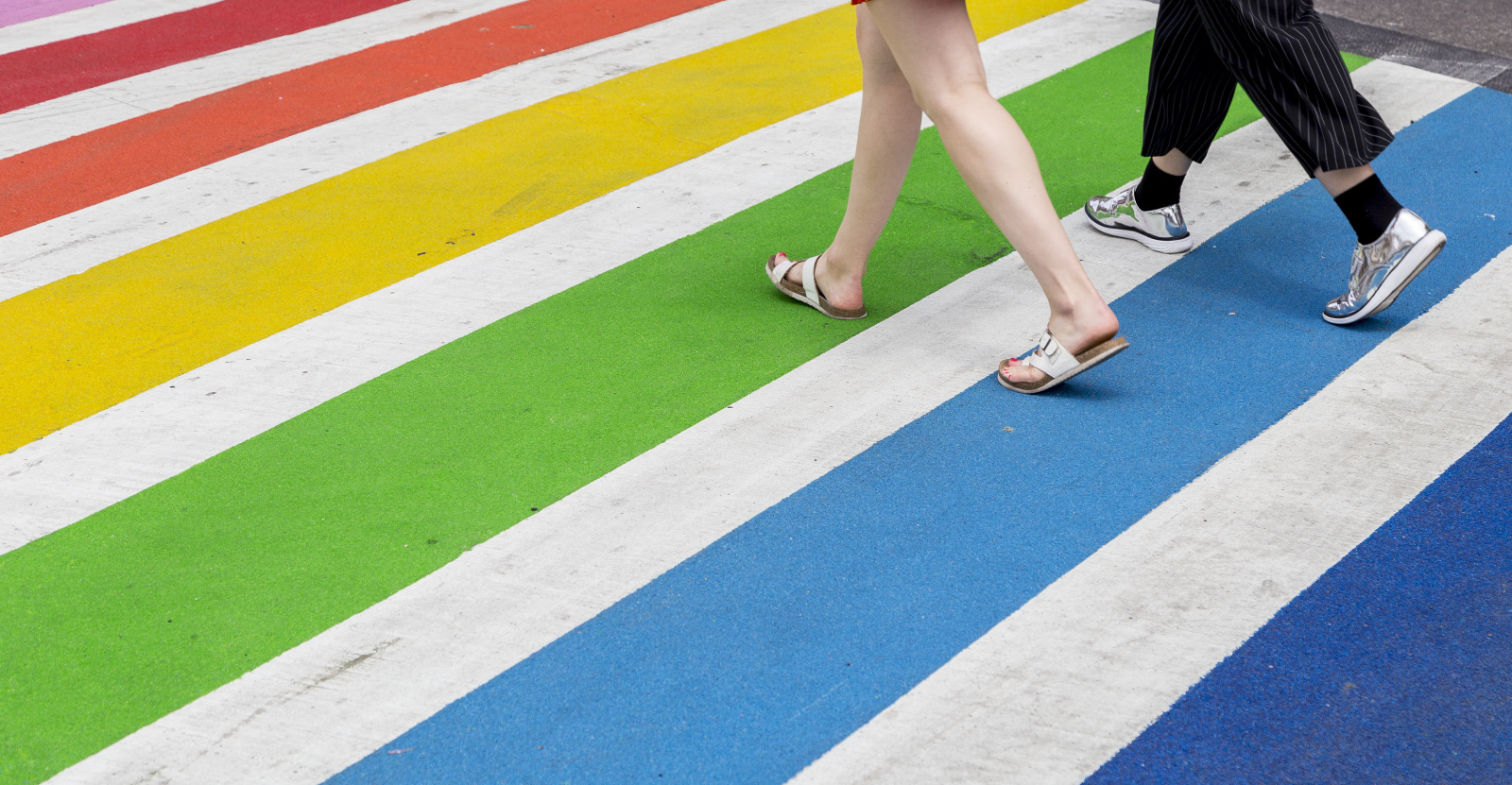 Ames, Iowa made national headlines this fall for painting rainbow crosswalks and then ignoring a request from USDOT to remove them. The incident highlights one way outdated federal guidelines prevent communities from making their streets safer and more pleasant with art and culture. But there are other ways for communities to add some color to streets while improving safety without running afoul of the feds.

Rainbows, dragons, fleurs-de-lis, zodiac signs, swans, geometric shapes: these are just some of the myriad designs that have made an appearance in crosswalks around the country over the past few years. While many of these designs can still be seen on the streets today, some of them have been removed—and countless others were never even painted in the first place—at the insistence of the U.S. Department of Transportation.

In letters to various cities that have implemented such designs, USDOT claims that these “non-standard crosswalks” have the “potential to compromise pedestrian and motorist safety” by “[diminishing] the contrast between the white lines and the pavement” and “‘[drawing] the eye’ of pedestrians and drivers.” Most recently, Ames Iowa received such a letter after installing various colorful crosswalks that represent the gay, nonbinary, and transgender pride flags. Ames decided to ignore USDOT’s “request” to remove the colorful markings in a confrontation that has garnered widespread national media attention.

Putting aside the fact that USDOT has been unable to provide any evidence that colorful pavement markings within crosswalks could have an adverse impact on safety, the agency’s argument is inconsistent. The letter suggests that crosswalk art makes crosswalks both less visible and more visible at the same time; it can’t be both.

Data documenting the effects of crosswalk art on safety are scarce, but what little evidence is out there suggests that colorful crosswalks are safer than traditional ones. In Seattle, which has dozens of artistic crosswalks, a three-year before and after study of new artistic crosswalks produced “phenomenal” results, according to Dongho Chang, the city’s top traffic engineer. There were zero collisions with pedestrians at colorful crosswalks in the year after they were installed—in contrast to nearby traditional crosswalks—and people have responded positively to the designs. Seattle’s experience suggests that crosswalk art could be a strategy to improve safety for people walking in urban and suburban areas.

Perhaps the most striking thing about the feds’ concern for safety in crosswalks is that they have made danger for people walking or biking a design feature on our nation’s roads. Most designs for roads, including crosswalk designs, are dictated by the Manual on Uniform Traffic Control Devices (MUTCD), the official national standard for traffic engineers. But many of these design recommendations are car-oriented, focused first and foremost on ensuring steady, high-speed vehicle traffic akin to a highway. Such designs are in direct conflict with what many cities are (or should be) trying to do: slowing down cars to improve safety for everyone who uses the street.

When locals paint artistic crosswalks to improve pedestrian safety—and inject some local culture into public spaces in the process—they get a reprimand from the federal government. This at a time when pedestrian fatalities have increased alarmingly. In the last decade, nearly 50,000 people were struck and killed while walking. The past three years have been the deadliest on record for people walking since 1990. In 2018, people biking and walking made up an alarming 20 percent of all traffic fatalities.

When it comes to crosswalks, it may take time for USDOT to finally catch up with the times and update the MUTCD, but for conflict-averse jurisdictions that don’t want to challenge the feds over artwork, there is another way to improve safety and add color to the street: curb extensions.

Also called bump-outs, bulb-outs, or neckdowns, curb extensions are a traffic calming technique (endorsed by USDOT) that can improve pedestrian safety by reducing the crossing distance. If used at an intersection, curb extensions reduce turning radii, which requires vehicles to slow down before making turns. Curb extensions can also be used mid-block where the curb “bumps out” into the shoulder or parking lane on either side of a crosswalk. 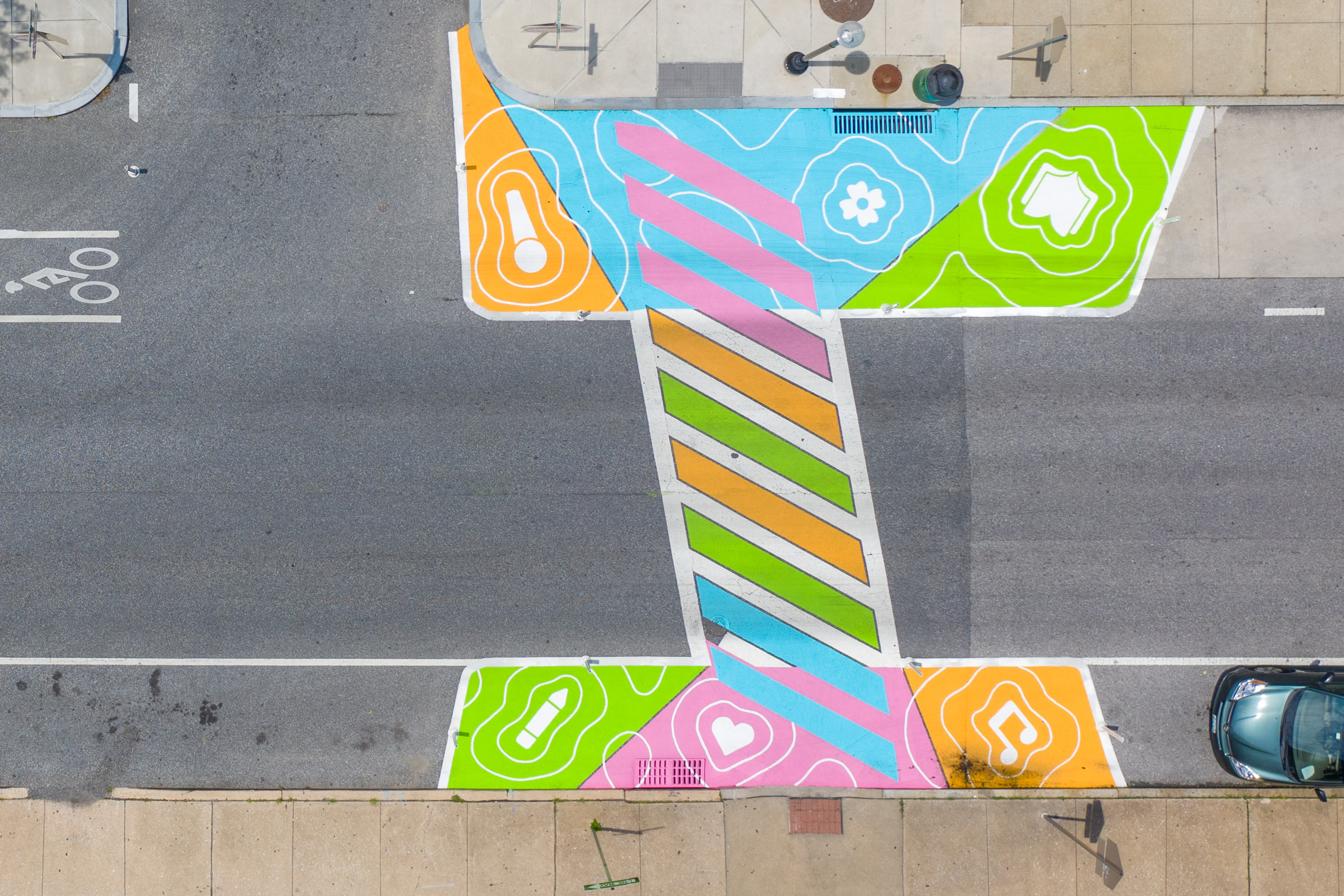 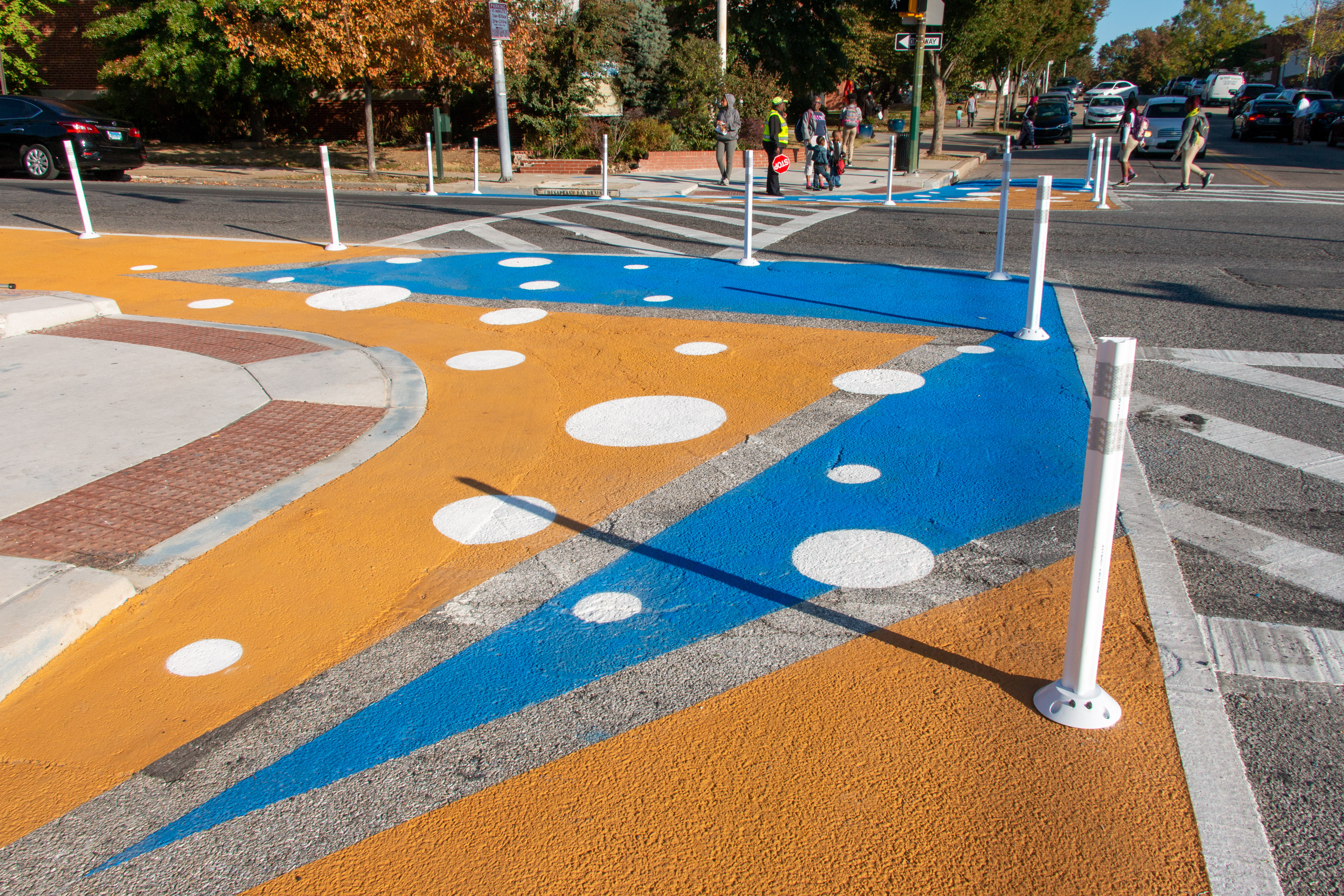 Many communities are installing curb extensions without waiting for concrete using a combination of paint, bollards, and street furniture to more quickly improve street design. These tactical urbanism-esque curb extensions can be a great candidate for artwork that won’t run afoul of outdated federal guidelines.

Similarly, pedestrian crossing islands can incorporate color and culture into a street while improving safety by giving people a safe place to pause in the middle of the road. Also known as pedestrian “refuge areas,” crossing islands make it easier to cross the street. These are particularly helpful in mid-block crossings or in areas with two-way traffic. According to USDOT, crossing islands can reduce crashes with people walking by 56 percent. 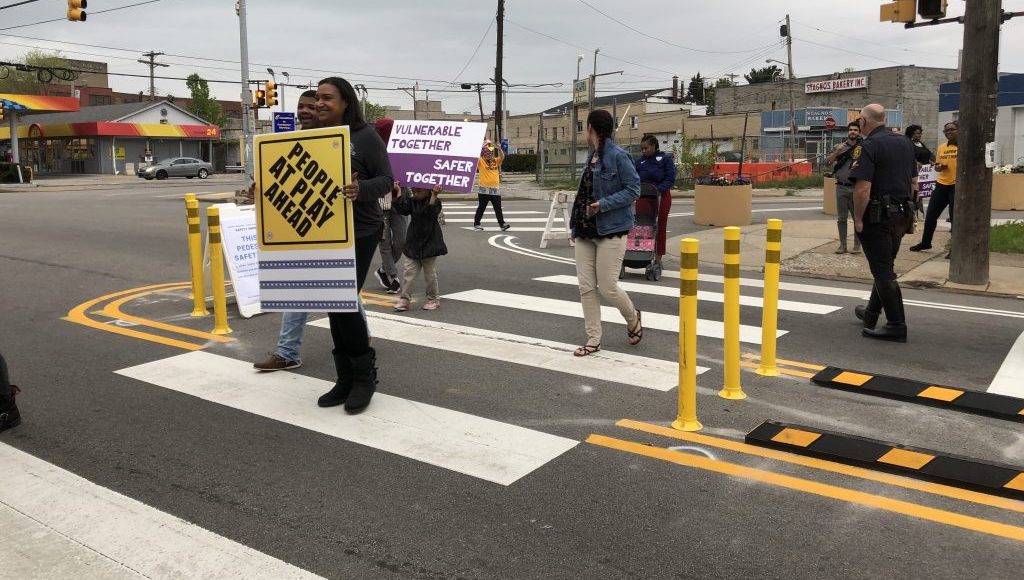 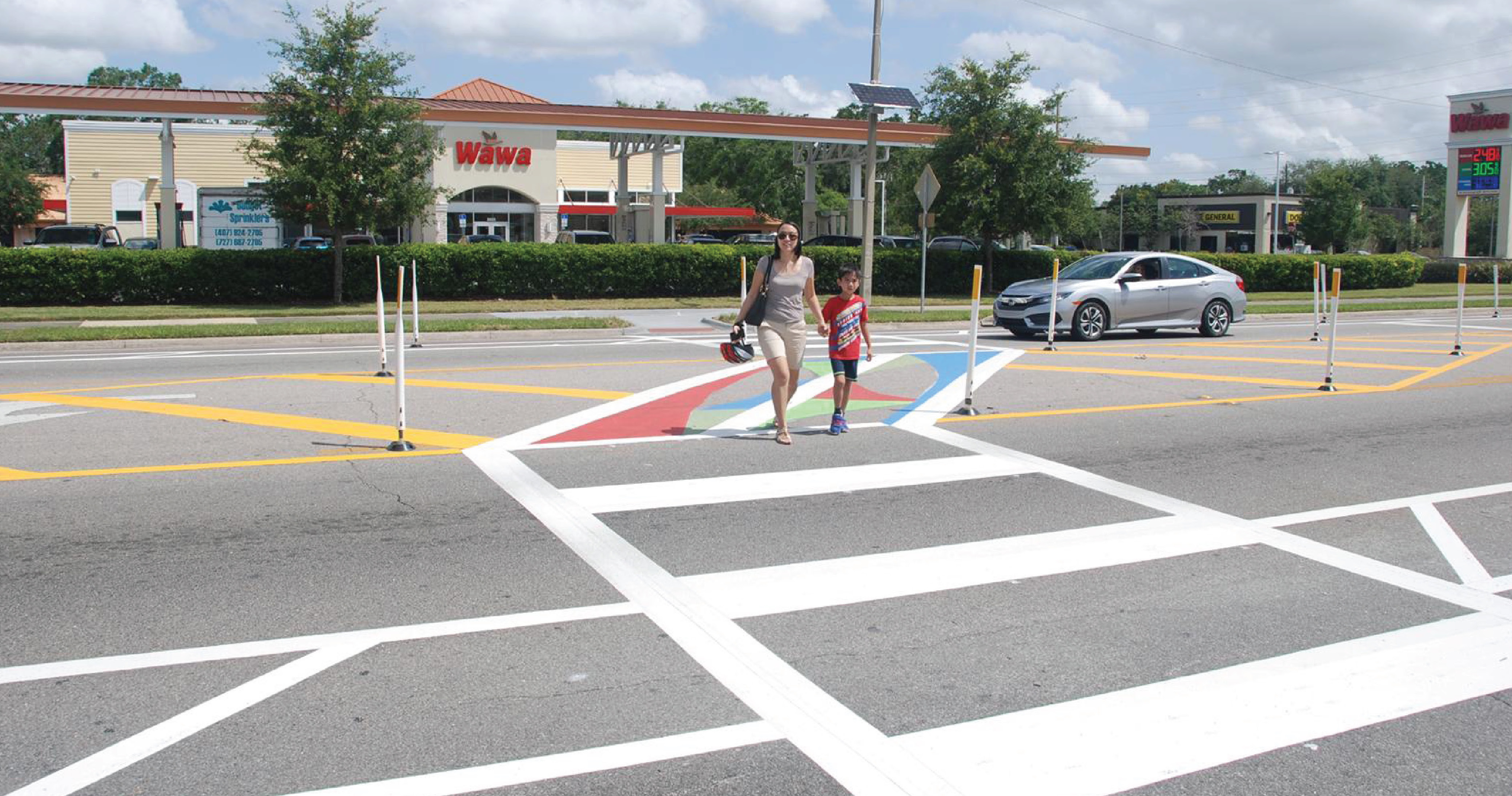 Pedestrian islands in Pittsburgh, PA (left) and Orlando, FL (right) that were piloted as part of the Complete Streets Academy. Both were constructed with paint and other low-cost materials. Staff photos.

Like curb extensions, pedestrian islands can be constructed with raised concrete medians, but some communities—like Orlando, Pittsburgh, and Lexington—used bollards and paint to create such islands.

Crosswalks have become a flashpoint for tensions between local efforts to save lives and the federal government’s strict adherence to slow changing regulations. But in our efforts to make walking safer in America, we need an all-of-the-above approach. In addition to crosswalks, there are numerous other opportunities to improve safety with curb extensions, pedestrian islands, or even other interventions like chicanes and traffic circles. But if your community does decide to try something new, make sure they’re evaluating the safety before and after—data is a powerful tool in making the case for change.