So your city wants to uphold the Paris agreement

President Trump withdrew from the Paris Agreement on June 1st, and since then more than 211 U.S. mayors have pledged to uphold it despite the president’s action. Together the mayors represent more than 54 million Americans and some of the largest U.S. cities.

To these mayors we say: thank you for your leadership. We support you and this strong commitment to reducing emissions at the city level. Keep going.

How should mayors keep going, exactly? The Mayors National Climate Action Agenda has already outlined several suggestions for how cities can achieve these goals, including things like investing in electric cars and clean energy.

We’re here to add that building compact, walkable neighborhoods served by transit is a crucial part of reducing emissions. Using this approach can help cities reach their emissions goals faster. Here’s why and how.

Compact, walkable neighborhoods are efficient. They use less car fuel, home energy use, and water. In 2015, electricity — including energy use for homes and businesses — accounted for 29 percent of total U.S. greenhouse gas emissions, and transportation accounted for 27 percent. Transportation emissions increased from 1990 to 2015, as Americans drove approximately 40 percent more.

If you’re worried about climate, you’ll need to make it easier for people to drive less, and to travel shorter distances when they do drive.

That means if you’re worried about climate, you’ll need to make it easier for people to drive less, and to travel shorter distances when they do drive. The good news is that walkable neighborhoods served by transit can help people do this. These neighborhoods also happen to be in high demand among both homebuyers and renters, meaning that the market is ready to help mayors meet their climate goals. So what do mayors do to capitalize on this opportunity?

Make it safer for people to bike and walk. A Complete Streets approach can help departments of transportation make streets safer for everyone, including people bicycling, walking, wheelchair rolling, and driving.

Prioritize public transit. Make it a priority in your budget and give transit advocates a seat at the transportation planning table. Ride transit to work, and be a public champion for it.

Remove obstacles to locating homes and businesses near that transit. Transit-oriented development — a mix of residential and commercial development within walking distance of public transportation — can play a substantial part in reducing greenhouse gas emissions. Some research has shown that living near transit can reduce household emissions by as much as 78 percent.

Reduce barriers to building on land that has already been developed. For years, the U.S. has been consuming land far faster than population growth. This expansive development has caused CO2 emissions from cars to rise while also reducing the amount of forest land available to absorb it. Reusing land that has already been developed can help curb this.

Make sure your street network interconnects, rather than ending in culs-de-sac and funneling traffic onto overused arterial roads. Even if destinations are spread out, this can keep driving trips short.

Support a diverse housing stock by allowing developers to build more condominiums, townhouses, or detached houses on smaller lots. This approach can help communities shorten distances between destinations, give people options to live in more efficient homes, and make it more affordable for people to live near where they work or the grocery store.

The commitment that mayors are showing to the climate right now is incredibly necessary. Climate change will have real consequences for Americans and their cities — and it’s not just a matter for the coasts. The map below, from the Union of Concerned Scientists, shows places in the country that have had multiple floods over the last 35 years. The coasts are certainly vulnerable — but so are areas along the Mississippi, and even in places like Oklahoma and Texas. 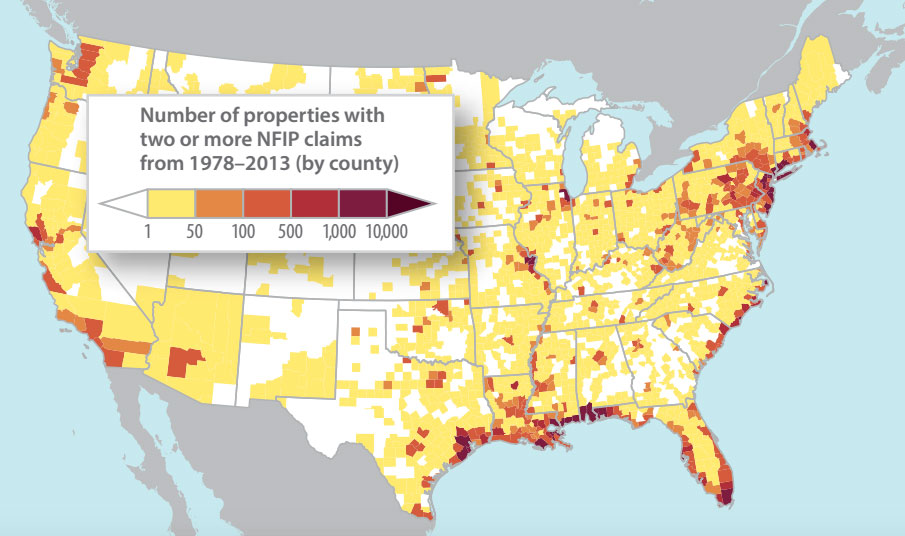 Claims to the National Flood Insurance Program (NFIP), from the Union of Concerned Scientists.

Climate change is already hurting people in these places. And before long, more homes will be damaged or destroyed, and more American families will be displaced.

If that’s not a compelling enough reason to take action, there is a financial angle to all this, too. Recovering and rebuilding from climate-related disasters can cost millions or billions of dollars. Taking action to mitigate these disasters is as much an issue of finances as it is about quality of life. Great places don’t happen when they’re underwater — physically or fiscally.

You’re doing great work out there, America’s mayors. Keep it up—we’re here to support you.