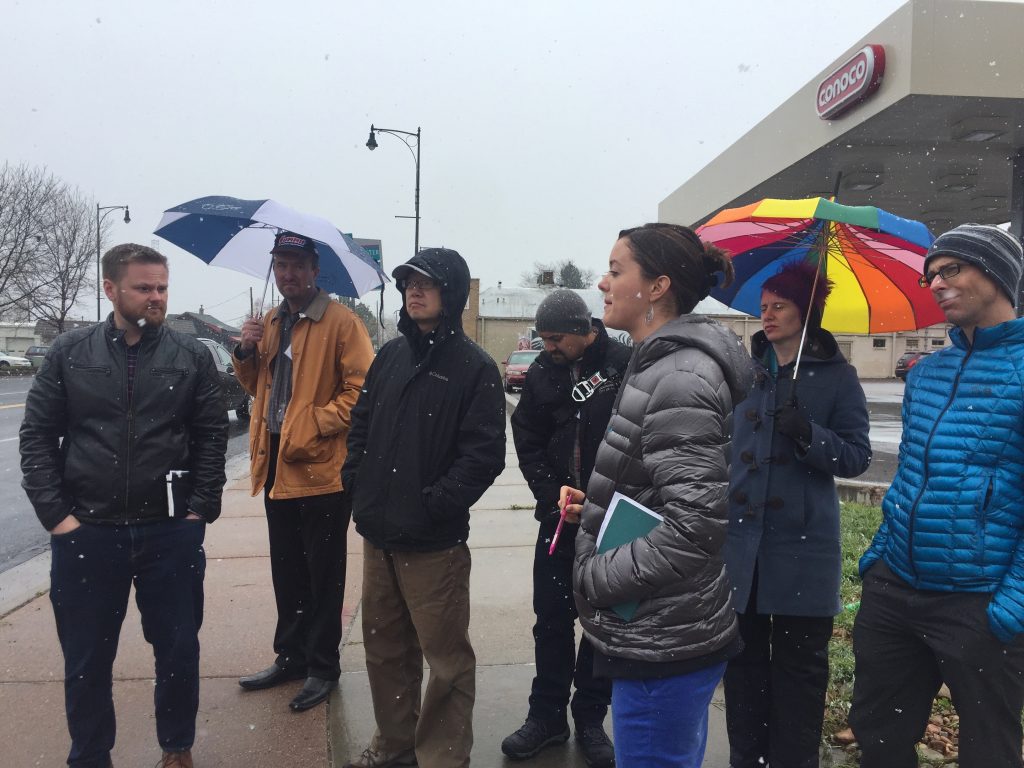 Last December, we selected the cities of Aurora, Arvada, and Westminster, CO to participate in the second Complete Streets Consortium Series. Throughout the series, teams from these three Denver suburbs, along with staff members from regional agencies, will work together to develop actionable Complete Streets policies that help them achieve their goals, including building transportation networks to serve all people who use the streets and providing more and better first-mile/last-mile connections to transit. This April, we met in Westminster, CO for the first of three workshops in the series.

Since 2004, the Denver region has invested almost $5 billion in expanding its public transit system, including new light and commuter rail lines. In July 2016, the B-line opened, connecting Westminster to downtown Denver. Seven months later, the R-line through Aurora opened. And after a long delay, the upcoming G-line will link Arvada to the rest of the regional rail system.

To realize the full benefits of this sizable investment in transit, cities and other jurisdictions in the Denver region need to make some tangible changes to the design of their streets and sidewalks, particularly around the around the new rail stops. To encourage more people to ride, it should be safe, convenient, and attractive for people to reach transit via foot, bike, wheelchair, or car.

Through the Complete Streets Consortium Series, the cities of Aurora, Arvada, and Westminster are aiming to do just that. Each city assembled a team of 10 people including engineers, planners, landscape architects, police officers, and emergency responders. They also invited representatives from state and regional agencies to participate in the series, such as the Colorado Department of Transportation, the Regional Transit District, the Tri-County Health Department, and the Denver Regional Council of Governments.

Building an interconnected Complete Streets network is no small feat. To achieve these ambitious goals, each city will need to change the way it plans, designs, funds, and operates its streets. Adopting a Complete Streets policy is often the first step toward making those changes a reality. We spent much of our time in Westminster discussing the elements of a strong Complete Streets policy and conducting exercises to develop visions, goals, and performance measures for each community.

Mayor Herb Atchison speaking to the #COConsortiumSeries about the transportation issues at the regional & state level #CompleteStreets pic.twitter.com/bqGqYtikNP

Some of Westminster’s local elected officials also joined us for these exercises and discussions, including two city councilors and Mayor Herb Atchison. Their leadership will be essential to advancing Complete Streets projects and policies moving forward. The councilors were eager to learn how they can better communicate the holistic benefits of Complete Streets in terms of transportation, public health, the environment, and economic growth, as well as how Complete Streets can help to address some of Westminster’s unmet needs, such as safer access to school bus stops and insufficient space for people walking and biking.

“25 years ago, sidewalks were 4 feet wide, and that took care of the needs at the time. But what we’re seeing today is if it’s less than 8 feet, it’s not meeting the demand. We have pedestrians, bikes, people, a lot of different uses sharing that space . . . You start to look at the culture change of what there is use for and how soon you can convert [the sidewalks].”

During the second day of our workshop, we dove into an on-the-ground case study of Westminster’s 72nd Avenue, which city staff hope to eventually transform into a Complete Street. After learning a bit more about the challenges posed by the street, including major safety concerns for people walking and biking, we ventured out into the snow to visit the site in person.

Weather aside, walking along 72nd Avenue was far from comfortable or desirable. We carefully navigated the especially narrow sidewalks, with cars speeding past right next to us without a buffer of any kind. 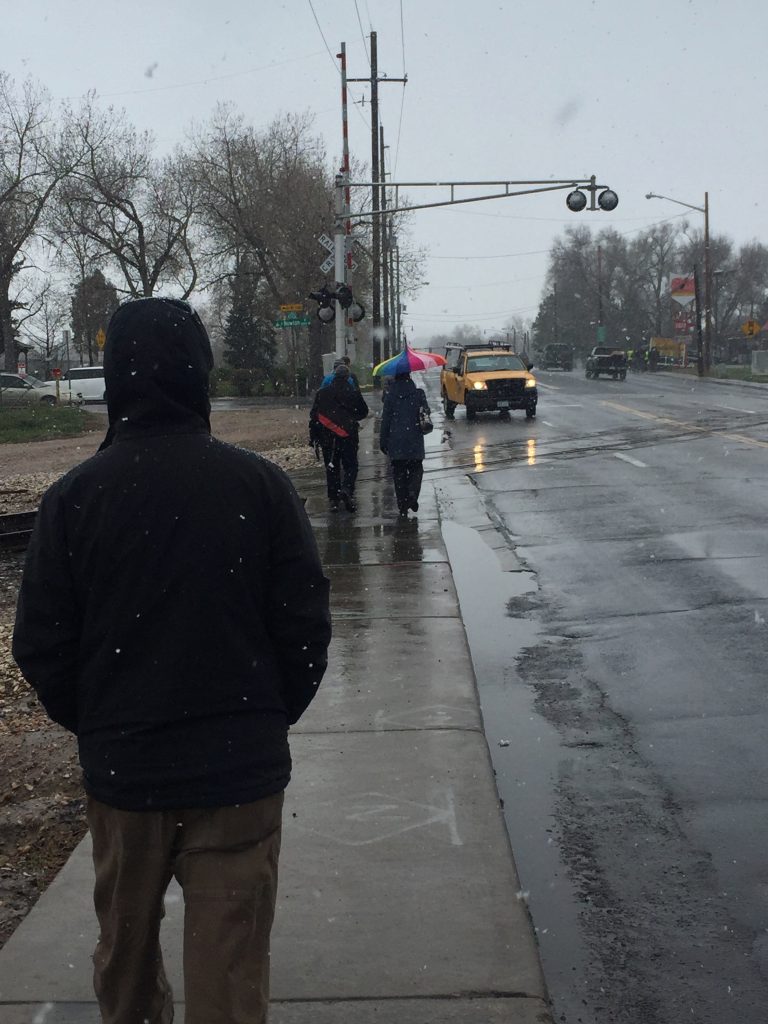 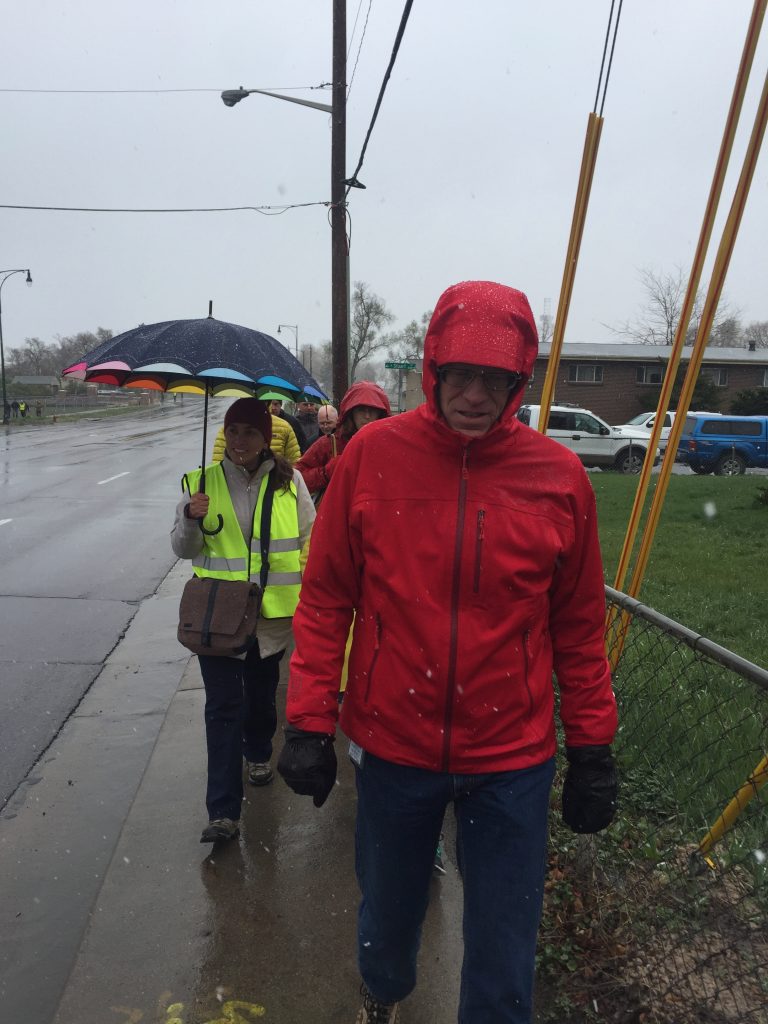 Safe, marked places to cross were few and far between. 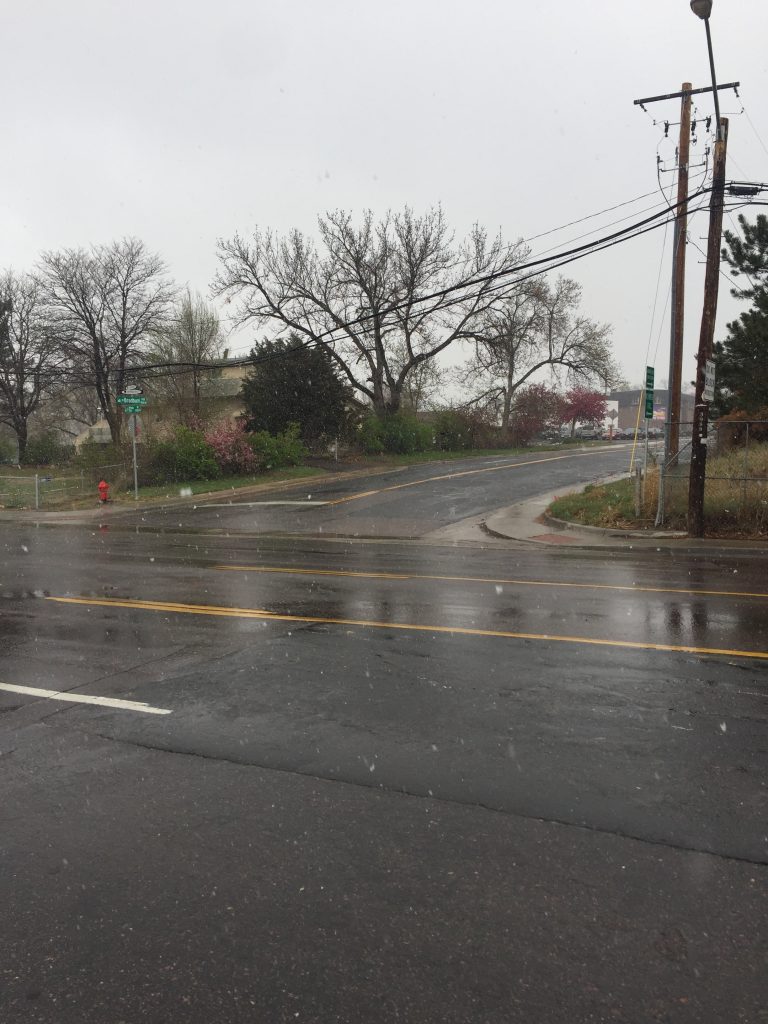 And in some places, utility poles blocked the already cramped sidewalks. 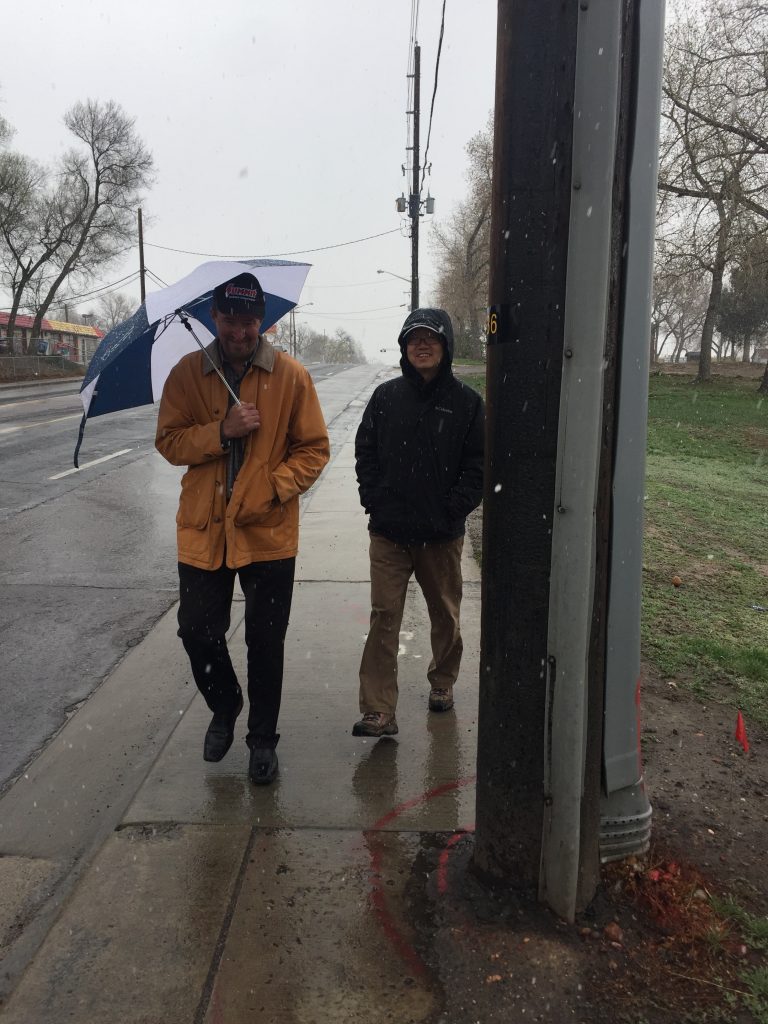 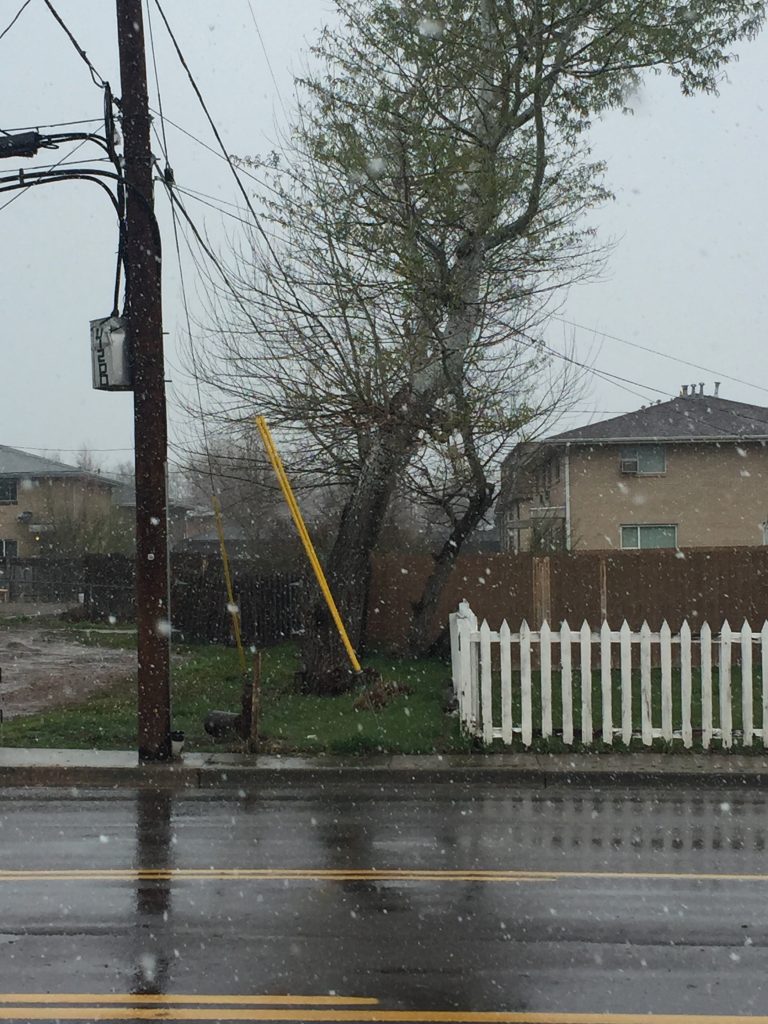 After experiencing 72nd Avenue firsthand, we returned to our workshop space to brainstorm improvements to make the street a safer and more comfortable place for people. This kicked off a long discussion about how adopting a Complete Streets policy could lead to the types of improvements needed on 72nd Avenue—and other streets like it in all three cities—by putting in place new design guidelines, project selection criteria, performance measures, and master plans to support Complete Streets. 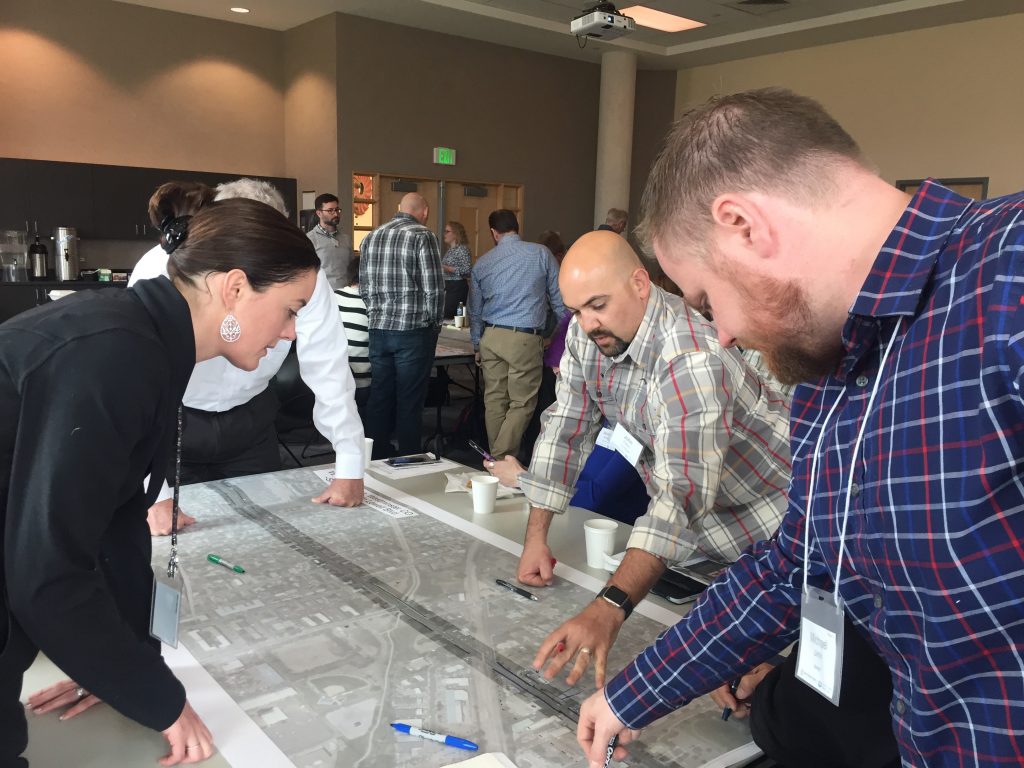 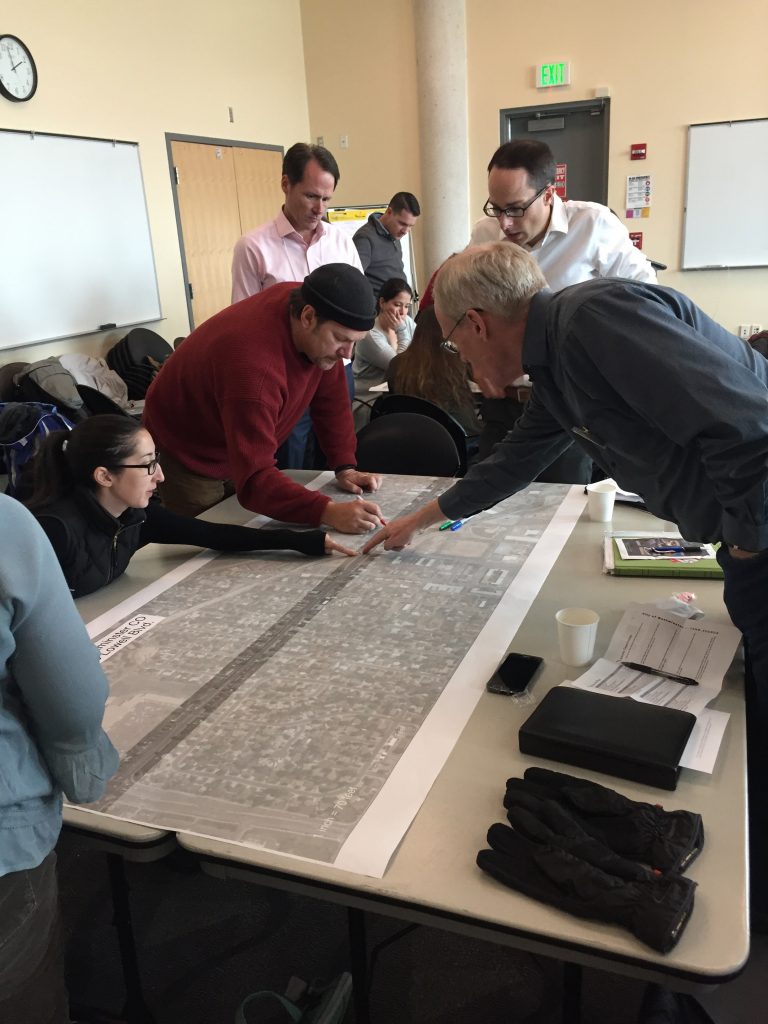 We’ll continue working with the teams from Aurora, Arvada, and Westminster throughout the Consortium Series to help them craft strong Complete Streets policies, identify opportunities to change their transportation planning processes, and talk through barriers to making Complete Streets a reality. We look forward to building on these conversations next month at our second workshop in Aurora. Until next time! 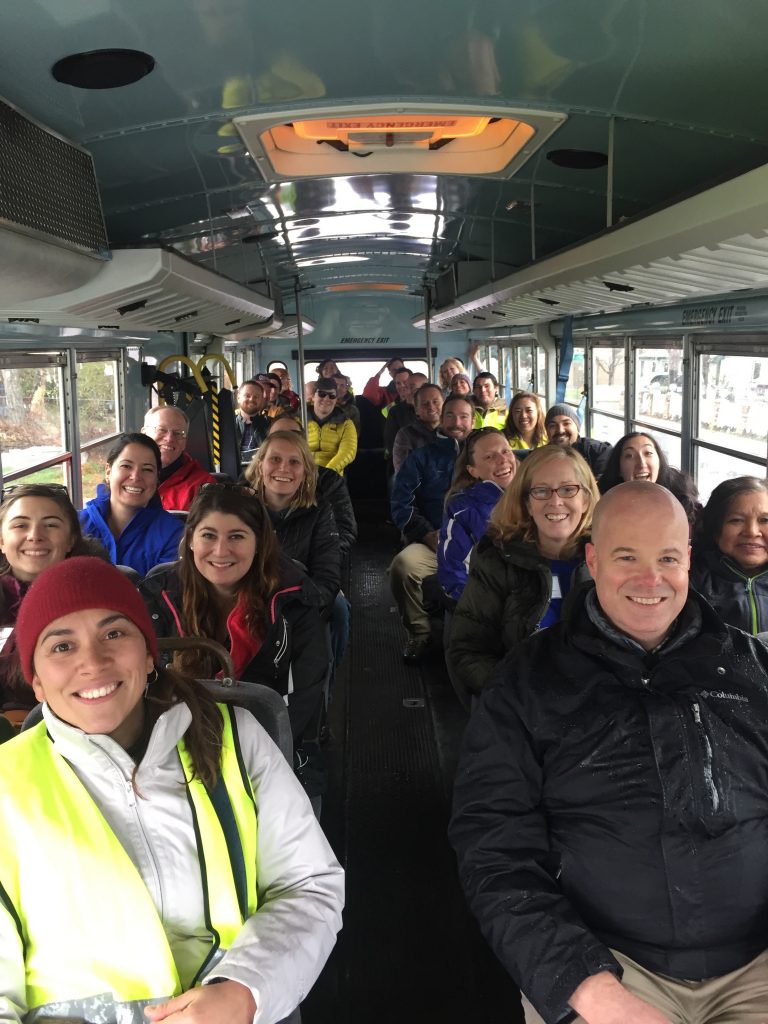 This technical assistance is funded through a grant to Smart Growth America from the U.S. Environmental Protection Agency’s Office of Community Revitalization under their Building Blocks for Sustainable Communities program; the Centers for Disease Control and Prevention have partnered with EPA through this grant to support the Complete Streets Consortium Workshop series. EPA’s Building Blocks program funds quick, targeted assistance to communities that face common development problems. Through the program, Smart Growth America has already provided free assistance to more than 85 communities across the United States from Hawaii to Maine.