Federal transportation policy is undermining any progress on climate

The conversation on climate change tends to focus on a few big things—electric vehicles, renewable energy, putting a price on carbon. But no matter how much progress we make on those fronts, Democrats and Republicans remain deeply committed to antiquated policy that undermines any action we take on climate change: spending billions to build new highways, encouraging more and more driving. 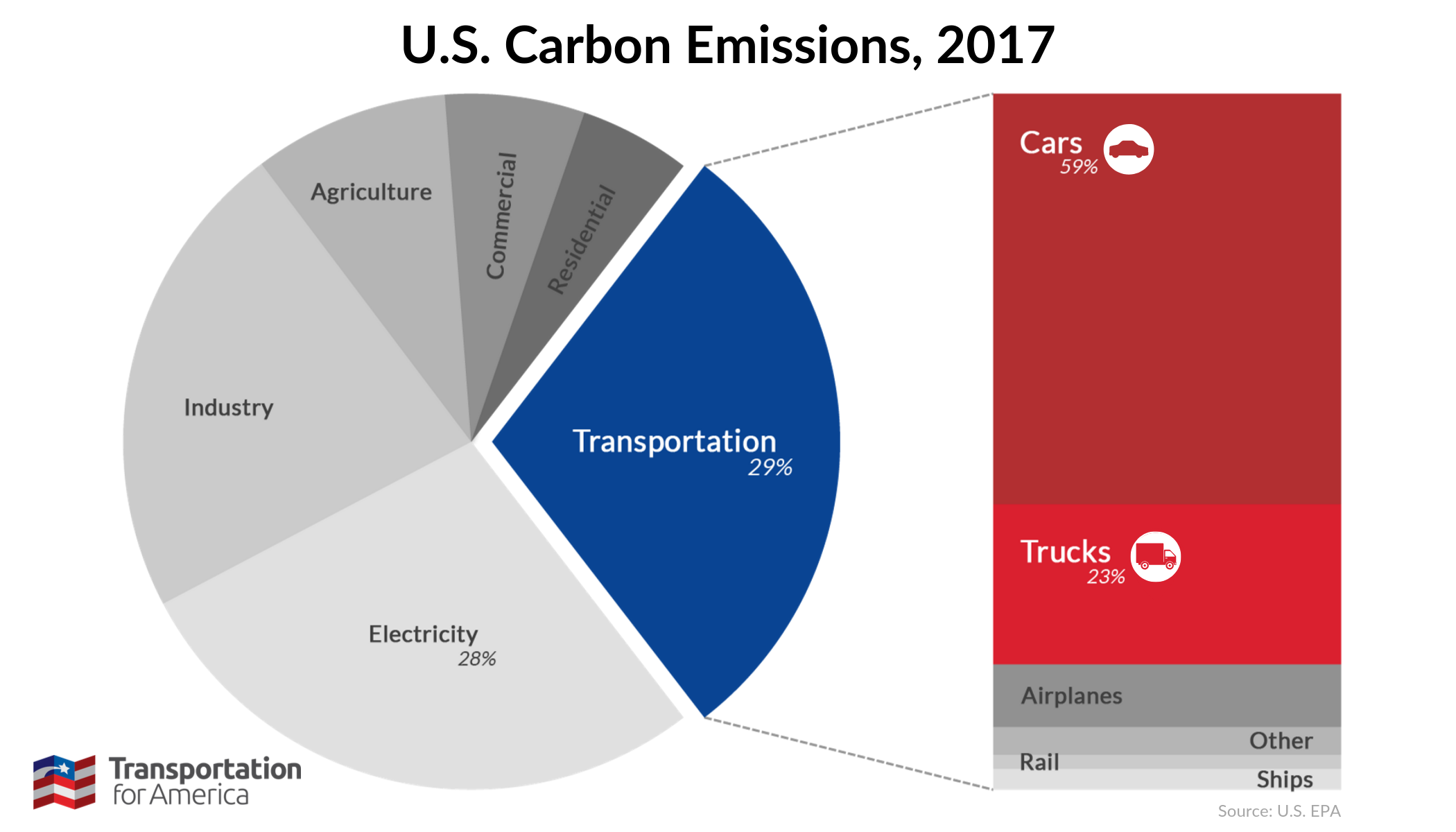 Transportation accounts for the largest share of carbon emissions in the U.S., and those emissions are rising—even as other sectors have improved. As federal policy and funding encourages more and wider highways, people live further away from the things they need and the places they go. We’re driving further and further every year just to get where we need to go. Emissions have risen despite increases in fuel efficiency standards and the adoption of electric vehicles. Despite an admirable 35 percent increase in the overall fuel efficiency of our vehicle fleet from 1990-2016, emissions still rose by 21 percent. Why was that? Because the total amount of miles traveled increased by 50 percent in that same period.

We don’t have a money problem, we have a policy problem Politicians (and the media) love to bemoan our “crumbling roads and bridges.” That must mean we need more money to fix them, right? Here’s a secret: most of the billions we spend every year on our infrastructure never go to repair. Despite the rhetoric, there is nothing in federal law that requires states to repair the roads we already have, so most federal money goes to building more highways. That’s a problem that more money won’t solve.

Even the National Academy of Sciences, through the Transportation Research Board, has called for massively increasing highway spending to as much as $70 billion annually to accommodate (or encourage, as it were) an additional 1.25 trillion miles of driving each year—blatantly ignoring what this would do to our emissions.

California, Hawaii, and Minnesota have all found that even with a fleet of electric vehicles, they will still fail to reach their aggressive climate targets without an accompanying effort to reduce driving.

A better federal policy would be to invest more in climate-friendly transportation options like transit, walking, and biking, and to stop stacking the deck so that local communities have to choose between easy money for a highway or an uphill slog for transit cash. While we guarantee states over $40 billion annually for highways, only $2.6 billion is available for new or expanded public transit, and this funding is not guaranteed. Further, while the federal government will cover 80 percent of the cost of a highway project, it will only pay for up to 50 percent of the cost of a transit project.

With limited funding for transit and the national rail network and federal dollars for walking and biking overwhelmed by the billions spent on highways, federal policy is designed to keep us in our cars. Further, highway funding is distributed by Congress to states based on how much fuel is burned. The more gas is burned in a state, the more money states get to spend on highways. It should hardly be surprising that this has forced people to drive more over the past decade while making the climate impacts of transportation worse.

When you consider U.S. transportation policy in light of the existential crisis that climate change poses, it starts to look pretty asinine.

Getting where you need to go shouldn’t always require a car, but we’ve designed our communities to prioritize car travel over everything else. With nearly half of all car trips three miles or less, many trips could be easily traversed by foot, bicycle, or transit. But the way we build roads to prioritize high-speed driving makes shorter walking, bicycling, or transit trips unsafe, unpleasant, or impossible.

It’s time that we stop prioritizing expansion over maintenance. It’s time for a paradigm shift. Cars certainly have a place in our transportation system, but our climate simply cannot sustain a system that rewards more and more driving. Our communities would be happier, healthier, safer, and more equitable if we built them for people instead of cars.

If we can retire this system that has doubled the country’s amount of driving in just a little over 30 years, we could build a transportation system that would improve access to the places that people need to go and reduce our emissions at the same time. We drove ourselves into this mess; now we’ll have to drive a little less to find our way out of it. 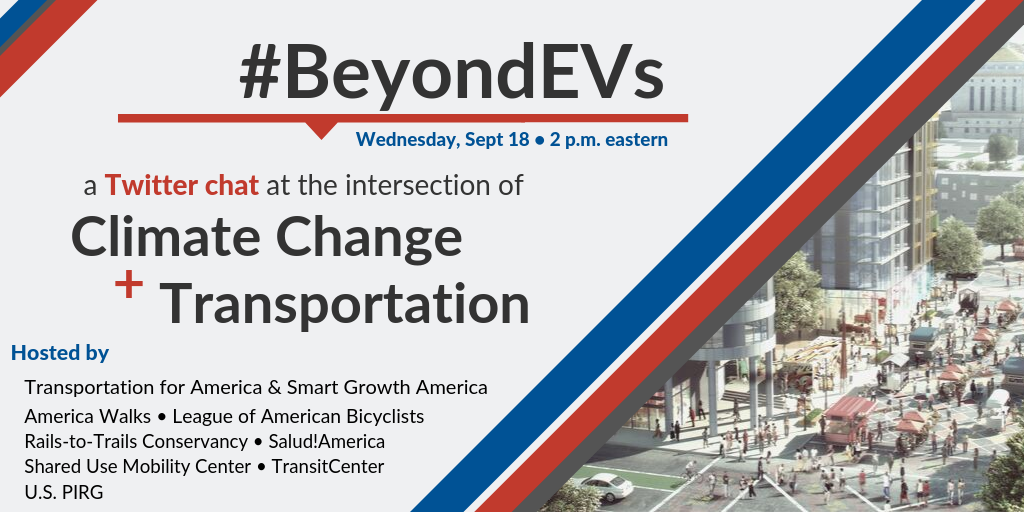 Join us for a Twitter chat about transportation & climate change on Wednesday, September 18 at 2 p.m. ET/11 a.m. PT. @T4America and our cohosts will lead the conversation with a series of questions over the course of an hour. Use #BeyondEVs to tweet you answers.
Uncategorized