Form-based codes: A means to equity in a compassionate city 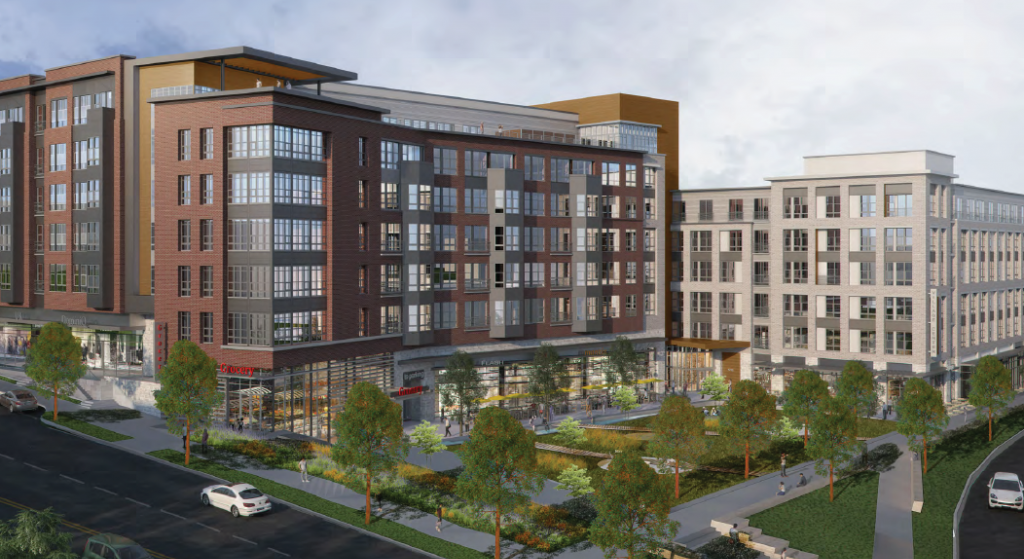 The Columbia Pike form-based code is helping Arlington County, VA preserve or replace the estimated 1,300 affordable housing units that were built with public funds. Centro is a new mixed-use development that will add more housing and include a much needed major grocery store for the corridor. (Image: Credit Arlington County Government)

A century of traditional land-use practices has ingrained inequities deep into communities across America. We’ve produced sprawling, auto-oriented development that has also separated people based on wealth, ethnicity, and race. Form-based zoning is well-positioned to compliment equity-driven public policies, while also enabling walkable, human-scaled development that residents and businesses love.

Form-Based Codes Institute Executive Director Marta Goldsmith and Smart Growth America President and CEO Calvin Gladney are joining a panel of experts to discuss the ways form-based codes can promote equitable outcomes. Their session, titled “Form-Based Codes: A means to equity in a compassionate city”, will be held today at The Congress for The New Urbanism’s annual conference in Louisville, KY.

For decades, policymakers and citizens groups have used zoning as a tool of segregation, whether intentionally or not. But the same tool can be used to undo that segregation and create more equitable communities with a few key tweaks.

Conventional land-use regulations (i.e. Euclidean zoning for the wonks among us) began in the 1920s. This type of zoning is based around the idea of separating areas strictly based on their intended use—residential, commercial, industrial, or civic. But these regulations also had the result of separating people, sometimes coincidentally and sometimes very purposefully, by income, ethnicity, or race, leading to inequitable treatment of residents and businesses.

Decades of conventional zoning has contributed to disinvestment in some areas, which continues to persist in many American cities. In Los Angeles, for example, more and more land has been reserved exclusively for single-family residential since 1923 and today, it’s illegal to build anything except a single-family detached house in over 50 percent of the city. This has resulted in exploding housing costs, which continues to force middle- and low-income families into more distant reaches of the city and county. Housing in these farther reaches may be slightly more affordable but transportation is expensive and car-dependent; transit is scarce if it exists at all.

By contrast, form-based zoning regulates the scale and character of buildings, streets, and blocks, placing much less emphasis on the size or number of units or the specific uses inside—we’ll dive into what this looks and the impact is can have later on. The process for drafting a form-based code engages citizens of all stripes in creating a vision for their community and offering a range of choices that they can make to define where and how they want to live, work, play, and travel.

What is equitable development?

At Smart Growth America, we envision a country where no matter where you live, or who you are, you can enjoy living in a place that is healthy, prosperous, and resilient. Living in a neighborhood that is beautiful, affordable, and accessible shouldn’t be the luxury of a lucky few. It should be a lifestyle that’s attainable by all.

Years of intentional segregation through zoning, redlining, and racial covenants have directed investment away from low-income and minority neighborhoods while keeping people of color out of white communities. Consequently, these disenfranchised communities are dealing with long-standing environmental injustices like living near pollution sources, social exclusion, participatory barriers in decision-making processes, disproportionate levels of poor health outcomes, and a lack of access to health care, neighborhood disinvestment, and inadequate access to jobs and social services.

All residents should enjoy clean air and water, safe and sufficient infrastructure, and attainable housing, jobs, and services—regardless of income, race, age, or gender. After all, a community is more than a collection of individuals but people sharing and working toward a common future. What makes any of this possible is intentional and explicit policies and investment, many of which can be supported or obstructed by tools like zoning.

A wider range of choices

Form-based codes enforce details that shape a high quality public realm—building shape and orientation, street trees, sidewalks—before focusing on building function. This enables several types of development to coexist, making it common for various types of residential, commercial, and civic uses to cluster together harmoniously under a form-based code. And this versatility of space is key to bringing the necessities of daily life closer together, which is a crucial step in lowering transportation costs by shortening trips and providing other modes of transportation.

Housing options are also expanded with form-based codes. Depending on the context, form-based zoning can enable communities to build everything from single-family detached housing to high-rise apartment buildings—and all types between. It’s this missing middle housing—duplexes, cottage apartments, townhouses—that can respond to the financial constraints and lifestyle choices of working families today. Conventional zoning, with all its rigidity, often makes these types of housing illegal, hence the moniker “missing” middle. Overall, form-based codes are the most appropriate tool for facilitating mixed-use, mixed-income neighborhoods with a variety of job and housing opportunities that are universally accessible.

Many communities have taken steps to enact policies and programs for more affordable housing, mitigating displacement, supporting small businesses, or school desegregation. These initiatives, however well-intentioned, are much more effective when they are aligned with a land-use regulation framework that supports these goals.

The form-based code for Winooski, VT, for example, helps to address a growing concern for retaining immigrant-owned restaurants by permitting smaller-than-usual business frontages. Bradenton, FL’s form-based code offers expedited approval and reduced review fees as a reward for projects that include affordable or workforce housing. These examples are just the beginning when it comes to using the force of law in a zoning code to effectively implement policies geared toward equity.

Modern form-based codes were first formulated for greenfield sites and master planned communities in areas that were largely affluent—like Seaside, FL. These simpler applications were straightforward for code writers and administrators: the code didn’t have to account for existing development or coordinate with other public policies and objectives. They had to satisfy a master developer and local authorities and few, if any, existing residents or businesses.

Now, form-based codes are proving their utility in a wide range of places across the country. They have been adopted in major cities like Hartford, CT; small rural towns like Marshall, VA; and formerly suburban corridors like Columbia Pike in Arlington County, VA. The process for drafting a form-based code is participatory and inclusive. It defaults to residents’ priorities, expertise, concerns, and aspirations, inviting existing residents—regardless of who they are—to create a vision that will guide the creation of a form-based code. In this way, we can create the kinds of vibrant, walkable, and prosperous places (i.e. smart growth) that all Americans deserve.

Smart Growth CEO and President Calvin Gladney will be moderating the plenary session—Building Together: Urbanism as an Engine for Resilient, Fair Communities—Thursday, June 13 from 5:30-7 p.m. with Jair Lynch, president of LOCUS (a program of Smart Growth America), and Maurice Cox. This conversation will focus on the legacy of longstanding systemic racism and economic inequity, due to a complex interplay of federal and local policies, that still promote economic exclusion of people of color in both booming cities and towns and places struggling with revitalization and a lack of investment. This plenary will be live streamed at CNU.org.