The annual Good Jobs, Green Jobs National Conference is wrapping up today in Washington, DC. Coordinated by the BlueGreen Alliance Foundation, the multi-day conference shares ideas and strategies for building a green economy that creates good jobs and preserves America’s economic and environmental security. It brought together a diverse group of agencies and organizations to tackle questions about revitalizing our economy, replacing jobs lost in the “great recession” and building the infrastructure needed to keep America competitive in the 21st century. 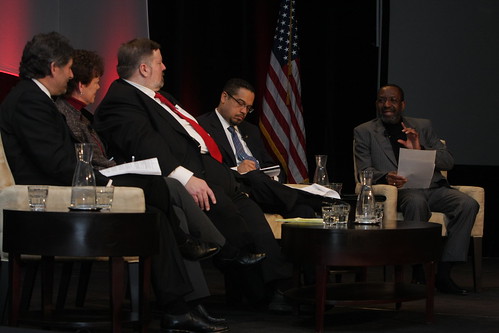 Congressman Keith Ellison discussed how sustainable communities have the ability to increase independence, maximize efficiency and encourage innovation. Clark Manus, President of the American Institute of Architects (AIA), detailed how AIA is “working with communities on more than just buildings,” and emphasized the possible depth of what “more sustainable, more responsible communities” can offer their residents – from increased access to transportation options to a stronger economy.

The benefits don’t stop at public transportation. By spending less money on land and equipment and a larger portion on labor, repair and maintenance projects pump more money into the economy faster than new road construction. When Congressman Ellison asked the crowded room of attendants if they were willing to fight for infrastructure, he was met with a resounding round of applause. He underscored that “the way to boost the economy is to put people back to work,” and as the recent report by Smart Growth America reveals: the fastest way to achieve these goals is to make strategic transportation decisions that create jobs in the short term and economic growth in the long term.