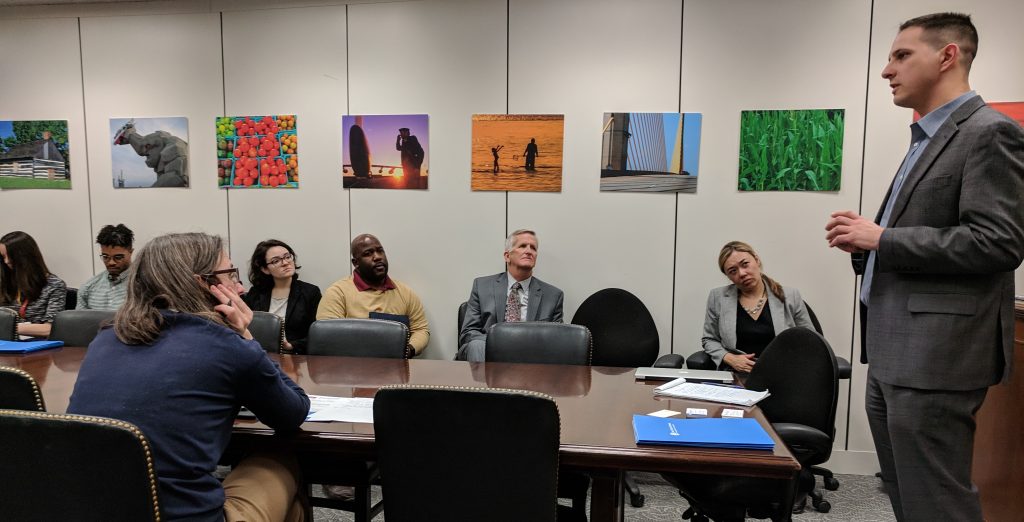 In the wake of Dangerous by Design making headlines from coast to coast, staff from the key Senate committee responsible for the largest portion of federal transportation policy invited us to come to Capitol Hill and explain the problem in more detail, and tell them what Congress can and should be doing to end this epidemic of preventable pedestrian deaths.

Between 2008 and 2017, drivers struck and killed people walking at an average rate of more than 13 people every single day. The 49,340 deaths in that period is equivalent to a jumbo jet full of people crashing—with no survivors—every single month for ten years.

At the invitation of members of the Senate Environment and Public Works Committee, some of our staff went to Capitol Hill yesterday to walk them through those numbers, the problem, and most importantly, how Congress both helped create the problem, and how they can help solve it.

What does it look like when you prioritize speed over safety?

We put out the call last week for your photos, so we could show these staffers what everyday people have to endure. Annalisse Daly sent us this powerful photo of her daughter with the story behind it, which we were able to share during the briefing:

Congress got played by the states in MAP-21

Congress struck a bad bargain with states during the 2012 federal transportation reauthorization. States essentially asked Congress to provide more flexibility to spend federal transportation dollars in exchange for more oversight, accountability, and new performance measures to assess what they were accomplishing. But it was a devil’s bargain, as Congress didn’t do nearly enough to require any actual accountability, and states are just comically gaming the system.

In short, in MAP-21, Congress required states to establish targets for certain performance measures, including safety. But the law provided no mechanism for holding states accountable for setting reasonable targets, or for meeting those targets. The safety targets for 2018 are stunning: 18 states established targets for non-motorized deaths and injuries that are higher than the number of people killed in the most recent year they reported these data. This is how you end up with nonsensical scenarios like the state of Florida being publicly committed to Vision Zero and eliminating all traffic deaths, while simultaneously setting a target of more people being killed while walking in 2018 than have been killed in previous years.

Now it’s up to Congress to institute more accountability in this system and hold states’ feet to the fire on making progress.

Cities have the flexibility to design safer streets, but states too often stand in the way

We were fortunate to have the City of Orlando’s Transportation Director Billy Hattaway with us in Washington, DC for the briefing. The Orlando metro was ranked as the most dangerous metro area in the country in Dangerous by Design (of which the city is a small portion).

Mr. Hattaway focused on how federal policy currently allows cities a wide amount of discretion—if it doesn’t conflict with the state’s policies or guidance. That small “if” is how many states keep their cities and localities from designing and building streets that are safer for everyone or that help accomplish their local goals of placemaking or economic development. (We’ve been chronicling the state role in this in a different series over the last week.)

He went on to explain that the Federal Highway Administration (FHWA) gives a wide amount of latitude to implement more flexible, safe, and useful designs. For example, rather than mandating wide lanes and sidewalks capped at five or six feet, cities can actually design streets with 10-foot lanes and sidewalks far wider than 5-6 feet—something that they are doing in many cities in Florida.

Last year, we recognized the strong coalition-building of Councilmember Ryan Dorsey and others in Baltimore who produced a very strong Complete Streets ordinance for the city, one which we’ll soon be scoring in this year’s Best Complete Streets Policies coming soon from the National Complete Streets Coalition. The Councilmember made the short trip down from Baltimore to share about his work with the city—and with the state of Maryland—to make Baltimore’s streets safer for everyone.

One important detail that Councilmember Dorsey shared was how any state’s singular focus on moving cars quickly through a corridor (rather than prioritizing safety, for example) often brings outsized negative impacts on the least fortunate in a city or community.  Above 70 percent of households in the lowest income census tracts in Baltimore don’t have access to a car. And when the streets are designed like highways to improve “delay” or “congestion” for commuters moving through those neighborhoods with no accommodation to make walking, biking, or taking transit safer, that often comes at the expense of those who live in that corridor.

We’re calling on Congress to follow the lead of Baltimore and the more than 1,400 states, cities, counties, and localities that have passed Complete Streets ordinances or laws that require transportation departments to bring a more holistic view of mobility to streets and roads that they build and design.