Houston, we have a solution 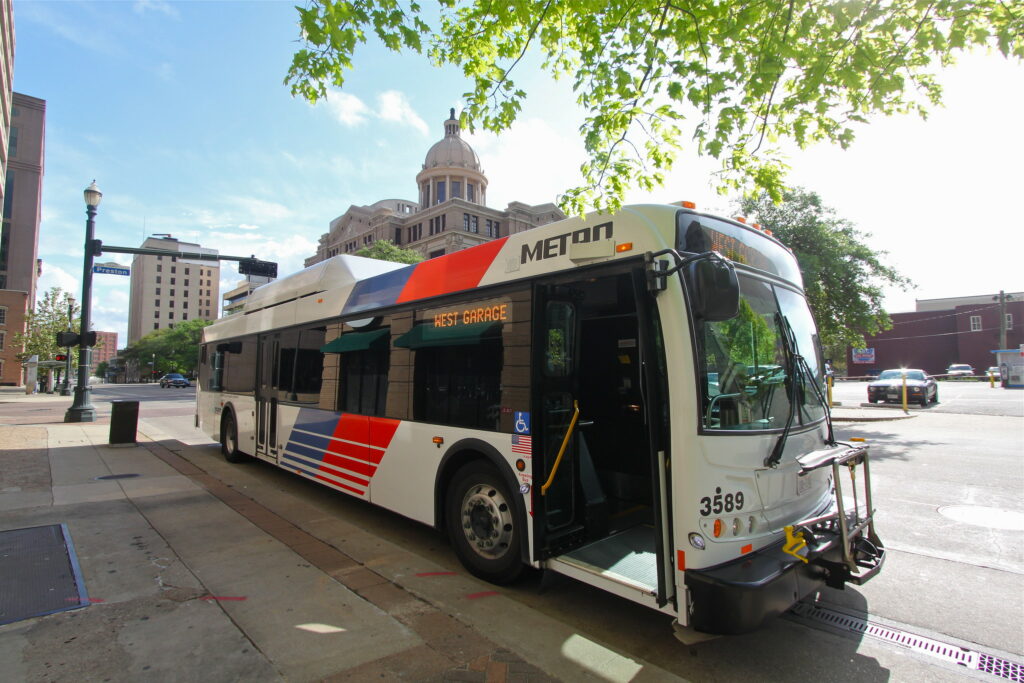 The results are nothing short of spectacular. When the new system debuts in August 2015, 73 percent of bus riders will have access to high-frequency service—a 217 percent increase from METRO’s current system. The high-frequency routes will have 15 minute headways. An additional 19 percent of riders will be on routes with headways of 30 minutes or less. Almost 60 percent of bus trips to 30 key destinations will be 10 minutes or faster. METRO will accomplish this more frequent, speedier service primarily by shifting to a grid system that allows for more direct routing than the current hub-and-spoke network though downtown. Some of the speed improvements are the result of reducing the number of street-level rail crossings encountered on a bus route, almost eliminating route branching, and moving away from long, delay-prone routes.

To top it off, the frequent routes will run just as often on the weekends, dramatically expanding access for those with weekend shifts or who rely on the bus to make a Saturday grocery run. With Houston’s current system, about half of bus riders had access to high-frequency service during the week, that ratio dropped to 25 percent on the weekends.

The recommended changes aren’t just pretty: they will connect a million people to a million jobs via frequent transit service. The number of people living within a half-mile of frequent service jumps by 117 percent and the number of jobs within a half-mile of frequent service increases by 56 percent. Ridership on the new system is expected to grow by 20 percent in a few years, an increase of roughly 30,000 to 40,000 additional daily riders.

METRO expects to fund the service improvements with only a small addition to their existing operational budget. It intends to accomplish this by cutting routes that run within a quarter or half mile of each other, funneling fewer buses through Houston’s downtown, and finding a better balance between ridership and coverage. Even with these eliminations, 94 percent of current riders will be able to board a bus at their current stop.

By completely overhauling its bus system, METRO will be able to provide bus service that is faster, more frequent, and connects people to jobs and amenities. Its buses are now a reliable choice for more people. A bus that’s full of people can transport more people using the same space as a few cars. Streets are public space, and the more that Houstonians ride the bus, the more efficient the street network will become. Houstonians will be spending less time and resources in getting where they need and want to go.

Now, the hard work that made the plan possible. The METRO Board members knew their ambitious approach would require intensive outreach at every stage of the project, and that they had to reach more than who project manager Geoff Carleton describes as the “professional citizens.” Carleton, a consultant Traffic Engineers, Inc. (TEI), explains that, “We recognized that if we were going to be able to be bold and rethink the system, we needed to touch both the existing and potential riders, and really start to educate people about what a transformative opportunity it was.”

In addition to the traditional public meetings, the project team interacted with Houstonians during their daily lives. METRO staff offered to speak about the plan with any organization that requested their presence. Transit agency staff and the consultants also held 13 outreach events at transit centers, handing out flyers and encouraging riders to check the plan website on their phones.

Information was also presented in multiple languages and formats. Language interpretation was provided in the priority languages for the Houston area: English, Spanish, Vietnamese, and Mandarin. The project team also took the time to produce maps, graphics, and analysis that illustrated the changes. Meetings were streamed live on the internet and recorded for people to watch later.

METRO communicated the proposed changes within the agency too. Bus drivers are the front-line staff in communicating the route changes, so board members had over a dozen meetings with drivers at operator facilities. Drivers were able to ask questions about the routes and how the plan would impact their work schedules. Many drivers realized that once they learned the new, more simplified system, it would be easier to explain the routes and connections to METRO customers.

Change can be difficult for people to embrace, so the project team deployed a humanistic approach in working with the public. They began the process with the understanding that they might need to communicate with some riders several times before the changes and rationale sank in. Throughout the process, the project team took the time to sit down with individual riders and explain how the routes changes would directly affect them. The team steered away from planning jargon like “existing conditions” and instead referenced what they called “the case for action.” They were willing to be yelled at and knew they wouldn’t satisfy everyone, but they kept circling back to why Houston needed the changes.

The project team also understood that even people with the best intentions might have objections to the plan before they understood how it benefitted them or the people that they represented. Though equity and increased access to high-frequency service was a major focus of the plan, many groups representing low-income communities initially were concerned about cuts in service. The city had evolved so much in the last three decades, however, that the mental map of where low-income families live didn’t match the reality. Social service organizations learned that poverty was less concentrated in the region than they had thought. It soon became clear that the new bus system would be a huge boon for the elderly, people with disabilities, and low-income families who couldn’t afford a car or drive, and who relied on public transit seven days a week to juggle weekend or evening shifts, bring their children to childcare, to shop for food and other necessities, and visit a clinic or senior center.

An exercise in trade-offs

The stakeholder group learned about the many variables in transit planning via innovative game played early in the planning process. Jarrett Walker, a transportation consultant, led the group through a resource allocation exercise. The stakeholders were divided into groups, and each group was given a game board and a set number of points representing METRO’s budget. The game board had a grid of the agency’s service area. Each cell represented a four square mile area, with the number of residents and jobs noted for each cell. Groups were tasked with designing a bus system within the allocated points. Some routes were more expensive than others: high-frequency routes with 15-minute headways required twice as many points as routes with 30 minutes headways, and four times as many points as routes with 60-minute headways. Routes could run in one direction or in a grid, with a two-way grid costing twice as much.

Carleton says that many groups started by focusing on downtown, but quickly realized that all their points were used up with nothing left to reach outside of the downtown core. This forced them to renegotiate within their group. Stakeholders groups were mixed at the tables so that representatives from school districts were sitting with regular bus riders, and community leaders were sitting with local business owners. Feedback from the stakeholder group formed the basis of the draft plan.

The trade-off exercise and extensive outreach paid off. “When we read the feedback for the draft plan, it was clear that people had spent a lot of time thinking about it and have engaged with it at a really deep level,” says Carleton. “Instead of comments like ‘this plan stinks’ or ‘this plan is great,’ we had comments like, ‘this bus needs to turn at this point and have this frequency because of x, y, and z.’ It was really impressive.”

The final system plan has been approved, but the outreach continues. Bus shelters all over Houston are covered in posters about the changes, and the local radio and television airwaves are filled with ads about Houston’s new bus plan. METRO is training community representatives and providing informational materials to churches, school districts, housing authorities, disability advocacy groups, hospitals, elected officials, chambers of commerce, Houston’s convention bureau, and the concierge association. METRO staff members are also speaking at neighborhood councils, civic clubs, and major employers.

The new plan is so different from the current system that instead of implementing the plan in stages, the new system will be unveiled overnight, with all the challenges that will entail. The project team had to devise a way to change the signage for Houston’s entire system within a few hours. In a stroke of genius, new bus stop signs are covered with a material that has the current bus route printed on it. When the new system is unveiled, the sleeves will just be slipped off the bus signs. METRO is also working to add new bus stops and to improve pedestrian access to current stops to help ensure that using the bus is even more safe and convenient.

Houston will soon have a bus system that vastly improves service and access for hundreds of thousands of its residents. The plan took years of hard work and dedication. But it’s still a beautiful leap.

This case study was written by Hanna Kite.