How zoning keeps the number of low-emission neighborhoods artificially low

The following blog is adapted from an excerpt of Smart Growth America and Transportation for America’s recent report, Driving Down Emissions, which explores how changing transportation policy and land use patterns are key to lowering greenhouse gas emissions.

It may appear that the United States’ typical car-oriented suburbs and exurbs that we’ve been building for the last 60-plus years—where often the only way residents can access what they need is by car—is the most in-demand style of neighborhood.

This isn’t true. For the past few decades, the demand for compact and walkable neighborhoods connected to jobs and services by transit has skyrocketed, but the housing market hasn’t kept pace. That’s because local zoning rules often make building more of these types of neighborhoods illegal.

In 2017, 62 percent of Americans reported that living near transit was important in choosing their home, and 54 percent cited their desire to live near bike lanes and paths, as found in the National Association of Realtors’ Community Preference Survey. And despite numerous news stories warning of a mass departure of residents from U.S. cities due to COVID-19, data has shown the opposite: Zillow’s research showed that, during the pandemic, “suburban housing markets have not strengthened at a disproportionately rapid pace compared to urban markets.” Even during an unprecedented pandemic, large numbers of people are not fleeing the cities for the suburbs, and cities will endure.

Millions more Americans want to live in compact, transit-connected communities than can find or afford a home in one. And those who do pay a premium to be there. Yet in many towns and cities, local zoning regulations artificially constrict the number of these communities that can exist. By limiting how densely housing can be constructed or requiring minimum lot sizes, zoning interferes and prevents the market from meeting the demand for walkable, transit-served communities. In fact, it’s illegal to build anything except single-family detached houses on roughly 75 percent of land in most cities—which might explain why in the 30 largest metropolitan areas in the U.S., walkable neighborhoods account for between 0.04 percent and 1.2 percent of land area.

The consequences of making housing like duplexes or multi-unit apartment buildings illegal are severe. For one, the artificial dearth of compact, walkable neighborhoods dramatically increases property values in these types of communities that already exist—often to levels that make them unaffordable to those who could benefit from them the most. This trend has pushed low-income people out of compact cities to more affordable suburbs, where fewer transportation options fail to thoroughly connect them to jobs and services. Their transportation costs immediately go up, sometimes wiping out the gains of the more affordable housing. One study found that residents in low-income suburban neighborhoods with some transit access can reach just 4 percent of metro area jobs within a 45-minute commute. This means many people without access to a car can’t reach most jobs, further trapping them in a cycle of poverty.

In addition, it’s an immense challenge to efficiently serve a neighborhood of only single-family homes by transit. This fact, combined with the way that destinations spread farther apart, trips become longer or more frequent, and roads become wider and less safe to walk along or cross, results in more greenhouse gas emissions. Driving contributes the majority of transportation sector emissions in the United States, making transportation the largest source of U.S. carbon emissions and the only sector of the economy where emissions are rising, not decreasing. 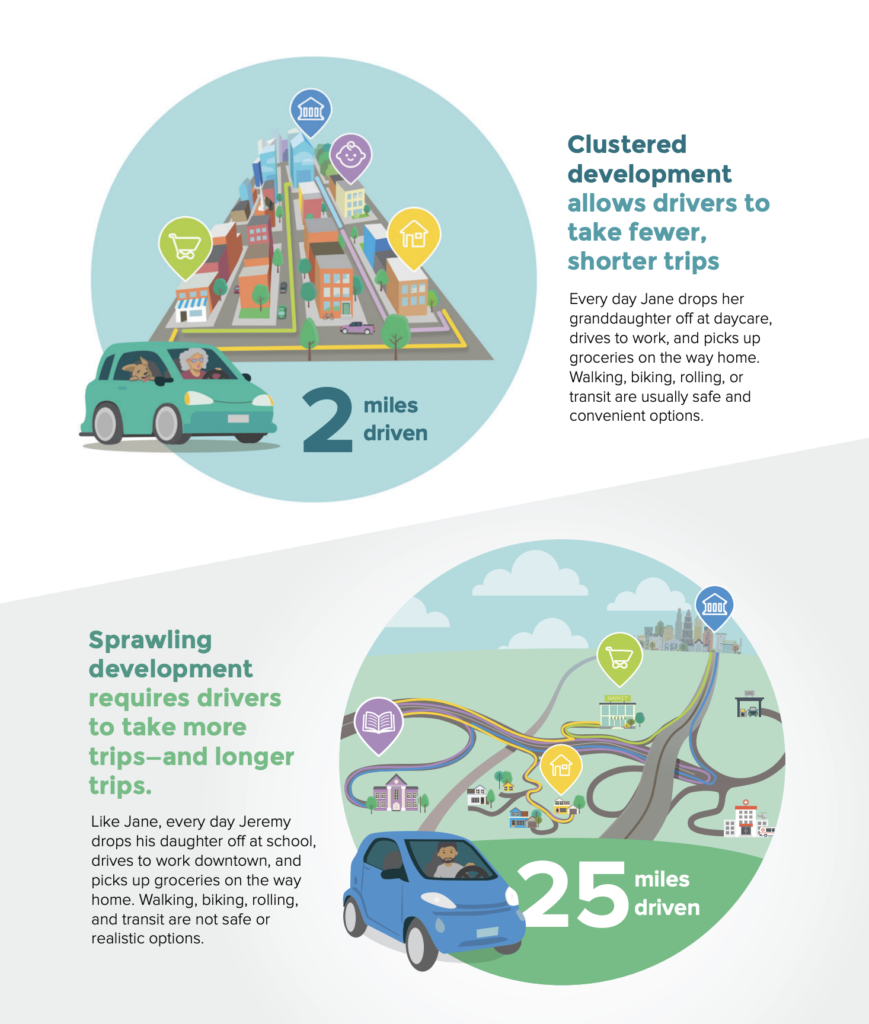 One solution? Permit the construction of more housing and neighborhoods that people want by reforming zoning rules to allow more homes, and more types and sizes of homes. More housing near transit and communities where people can live, work and play is needed to meet the demand and reduce the price pressure.

Many cities are already updating their zoning to help build these walkable neighborhoods. Consider this:

In these cities, anyone is free to continue building single-family homes in almost any neighborhood, but now more home types are legal. These changes will encourage compact urban development and make it more affordable to live in these cities, mitigating future sprawl and the additional driving it would cause.

However, local zoning regulations don’t exist in a vacuum: many zoning decisions are made in response to federal incentives. Federal transportation policy’s disproportionate investment in highways encourages many local governments to double down on sprawling land use patterns that best accommodate the high speed roads their state is building everywhere, pushing destinations further and further apart.

Federal transportation policy can help reverse this trend by allocating funding to programs that increase access to jobs and services the most, regardless of mode—as is the case in the INVEST Act, the surface transportation bill passed by the House this past summer. The federal government can also commit to funding public transit and highways equally.

Cities and towns should reform their zoning so that everybody who wants to can live in a walkable neighborhood connected to jobs and services by transit. Allowing the market to meet the demand for more homes in places that naturally come with lower emissions is a powerful climate change strategy. We’ll never reduce our carbon emissions, dismantle barriers to opportunities (particularly those faced by people of color), or rebuild our economy if we don’t make it easier and more affordable to live in great places.