To learn more about Huntsville’s street safety demonstration project profiled here, along with similar safety projects from Durham, NC and Pittsburgh, PA, tune in to the release webinar for the Safe Streets, Smart Cities Academy on Thursday, August 1 at 2:00 p.m. ET. 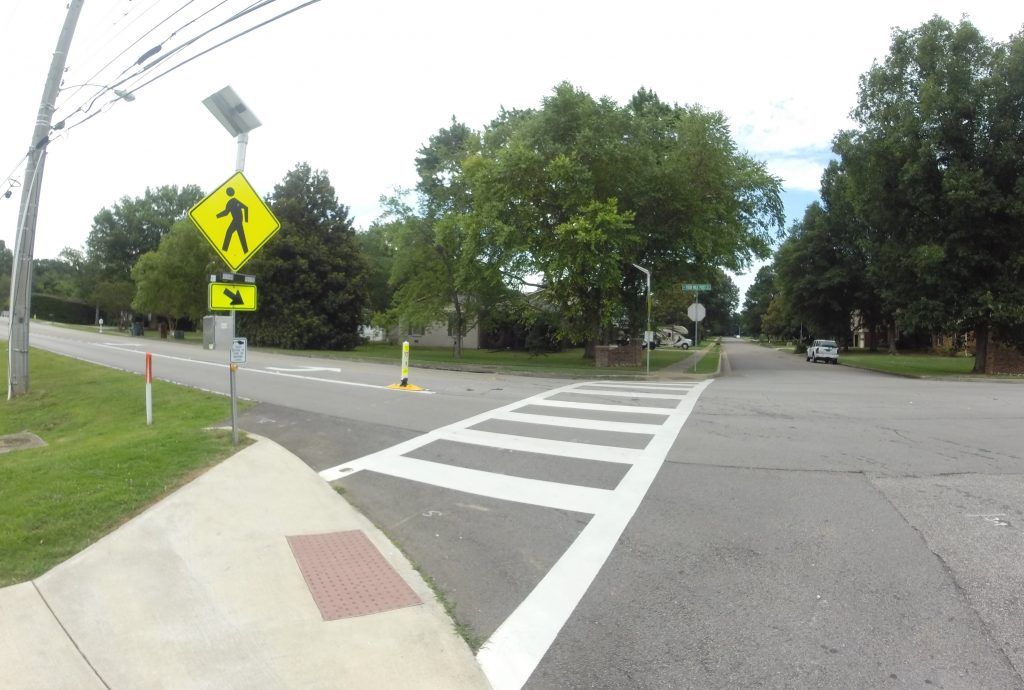 Huntsville’s demonstration project added more intensive improvements to an existing crosswalk on a high-speed road where very few drivers yield to people crossing and filled in a missing bike connection to a nearby greenway.

Through the Safe Streets, Smart Cities Academy, Smart Growth America worked with three cities around the country to implement temporary safety demonstration projects. The City of Huntsville partnered with the South Huntsville Business Association, AARP, and the Rotary Club to implement a demonstration project on 4 Mile Post. The project makes it easier and safer for people to walk or bike along and across the street, and it also restores missing connections between nearby destinations, including homes, parks, trails, and employment centers. Along the way, the team faced resistance from elected leaders outside the project area who opposed any project—even a temporary one—that would take space away from cars, but thanks to their persistence and close engagement with the community, they won the support they needed to install temporary safer streets improvements on 4 Mile Post and to work toward making these changes permanent.

Originally named for its historic location four miles beyond Huntsville limits, 4 Mile Post is a wide, straight three-lane road. Once a route to bypass the city, 4 Mile Post now falls well within the fabric of Huntsville, whose footprint sprawled in the 1950s to encompass over 200 square miles. Today, it sits between a residential neighborhood and a nearby shopping center, and it divides the Aldridge Creek Greenway from Jones Farm Park just across the street. As a result, 4 Mile Post needs to provide a safe way for people to walk or bike along and across the street to reach these destinations, but its design continues to prioritize high-speed through traffic, creating a dangerous environment for all people.

The city previously installed a marked crosswalk to help reconnect people’s homes and the greenway on the south side of 4 Mile Post to the park and job center on the north side. However, without more intensive treatments to calm traffic, speeding drivers seldom yielded to people crossing. In addition, cyclists using the greenway lacked any safe, legal way to continue along or across the street. A team from the City of Huntsville decided to implement a demonstration project on 4 Mile Post to show people how quick, low-cost changes could create safer connections for all people.

In selecting a site for their demonstration project, the Huntsville team wanted to focus on improving safety for vulnerable users, especially older adults and people walking. 4 Mile Post caught their attention as the site of several recent crashes, including one involving a pedestrian in the crosswalk. Additionally, the neighborhood immediately adjacent to the crossing has a much higher median age of 55 years old compared to only 39 years citywide, and older adults living in this neighborhood complained that they felt stressed and unsafe when crossing to reach the park just across the street. Finally, nearby families also did not want their children anywhere near the street to reach the park or nearby greenway because of how dangerous it is for people walking.

“I didn’t know if I was ever going to email you about this,
but today nobody would stop for me at all.”
—Allison Smith, local resident 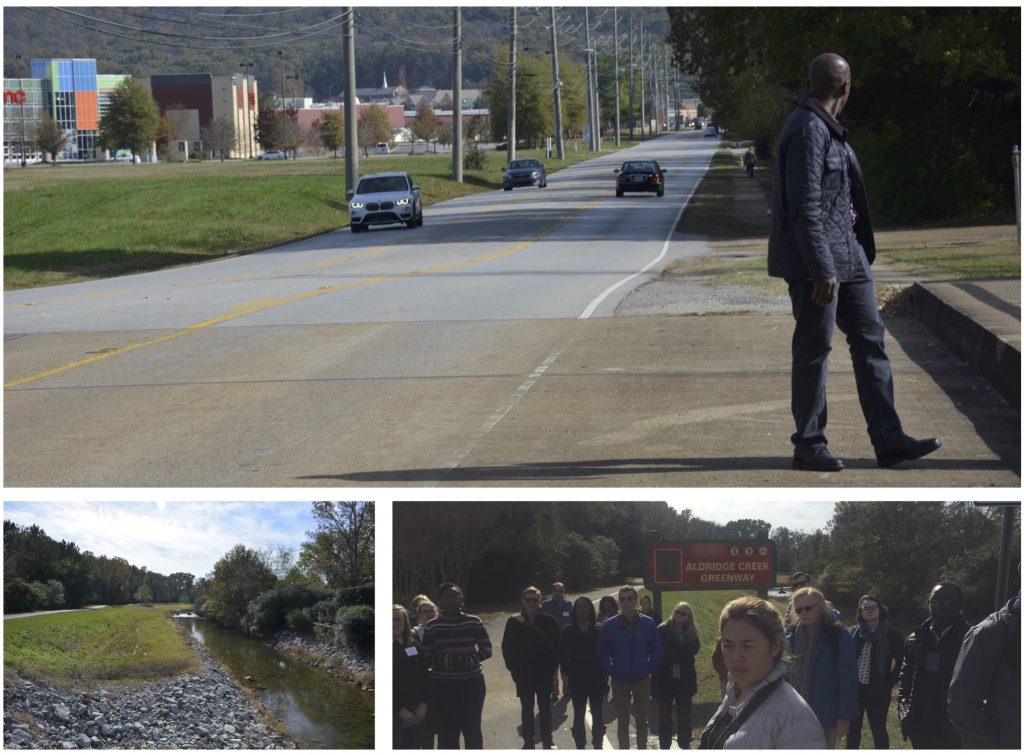 Despite its proximity to the Aldridge Creek Greenway and a major shopping center, 4 Mile Post provides few complete connections for people walking and biking to reach key destinations safely.

To learn more about people’s experiences and perceptions of 4 Mile Post, the Huntsville team partnered with the South Huntsville Business Association to hold a listening session with over 40 attendees from the local community. They also worked with the Rotary Club and AARP to go door-to-door to business owners and local residents, inviting them to come share their thoughts about the street. Finally, they invited councilmembers, law enforcement, and traffic engineers to come listen to what the community had to say.

The overarching themes that emerged from these conversations and listening sessions were concerns about speed and failure to yield. Thanks in part to 4 Mile Post’s raceway-like design, as well as the under-used center left turn lane that people use to pass other drivers, people frequently sped along the road at dangerously high speeds and seldom yielded to people waiting to cross.

The Huntsville team used this feedback to guide the design of their demonstration project. When the time came to launch the project on the ground, they continued to bring the community along, staging a ribbon cutting and safety-themed block party to unveil the improved crossing, in collaboration with the fire department, local businesses, and the same organizations who helped with community engagement. In addition, two elected officials attended the launch event, creating an important opportunity for face-to-face conversations with local residents, who overwhelmingly expressed gratitude for improvements at the site.

“People couldn’t stop thanking us enough for just making it safer
and all the little implementation that we were doing.”
—Rachel Bolton, City of Huntsville 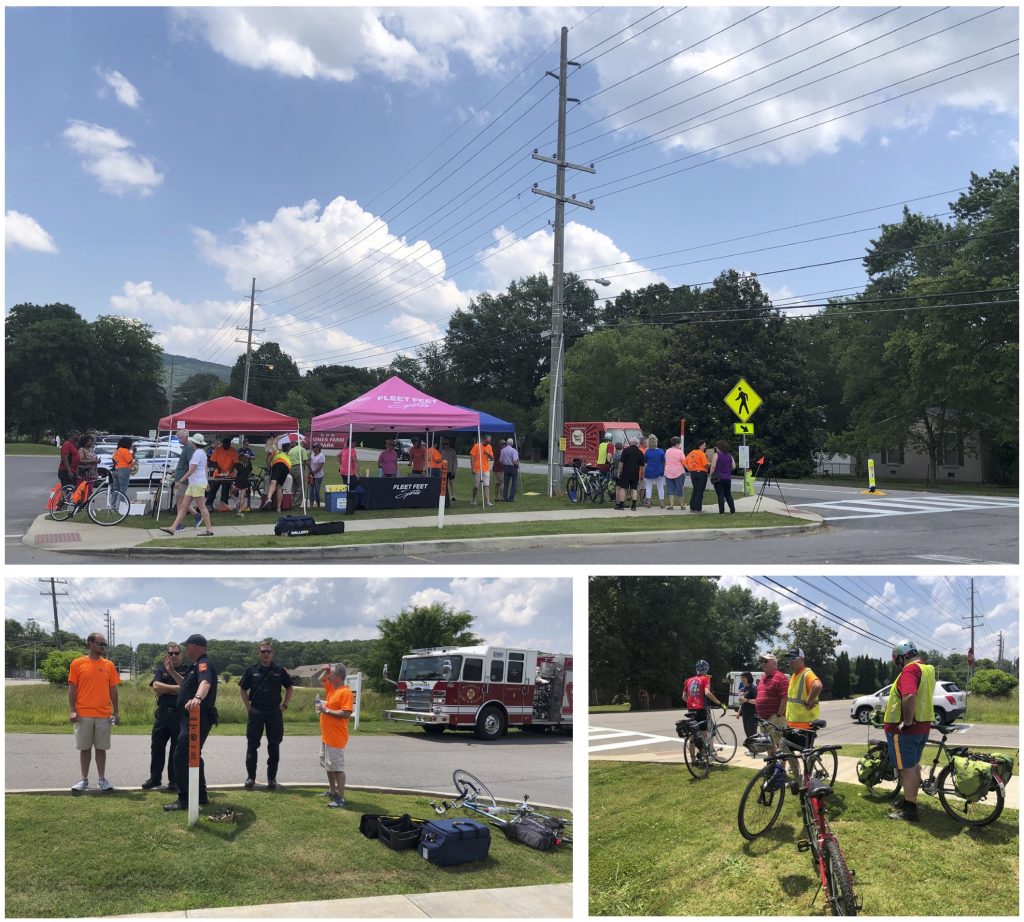 Assorted photos from the launch event for Huntsville’s demonstration project.

Based on community input, the Huntsville team realized that they needed to redesign 4 Mile Post to coax drivers to drive more slowly and cue them to properly yield to people crossing, especially older adults, some of whom may take longer to make their way across. They also recognized a need to fill in a missing connection between the Aldridge Creek Greenway, which stopped at 4 Mile Post.

The team originally pitched a road diet to department leadership, shifting one lane of traffic into the under-used center left turn lane and freeing up newly protected space for people to walk and bike. By narrowing the number of lanes approaching the crosswalk, this would also prompt drivers to be more aware of their surroundings, cuing them to slow down and safely share the street. 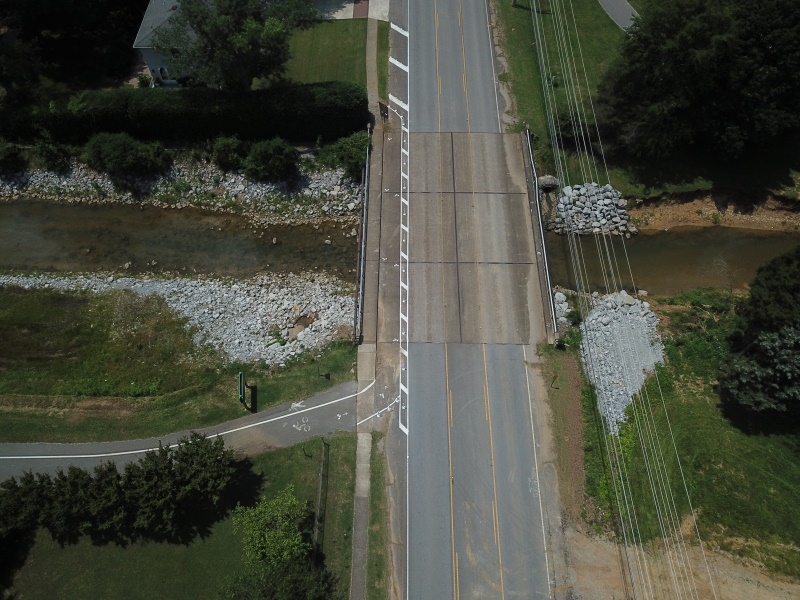 The team from Huntsville adapted their design after facing resistance to their project. Instead of shifting traffic into the under-utilized left-turn lane, they used temporary paint to create a buffered space in the shoulder for bicyclists to ride from the Aldridge Creek Greenway to the crosswalk.

However, even though the team’s analysis showed that removing this extra travel lane would not create delays for people driving or reduce capacity of the road, decision-makers pushed back on any project—even a temporary one—that might be perceived as taking space away from drivers. This resistance highlights the challenges creating a culture of safety in a transportation system that has historically prioritized the high-speed movement of cars over all other users.

Undaunted, the Huntsville team adjusted their project’s design. They used paint and flags to outline a temporary, off-road multi-use path leading from the greenway to the crosswalk, and they introduced a type of signal only recently approved by the Alabama Department of Transportation for use throughout the state called the Rectangular Rapid Flash Beacon, or RRFB. 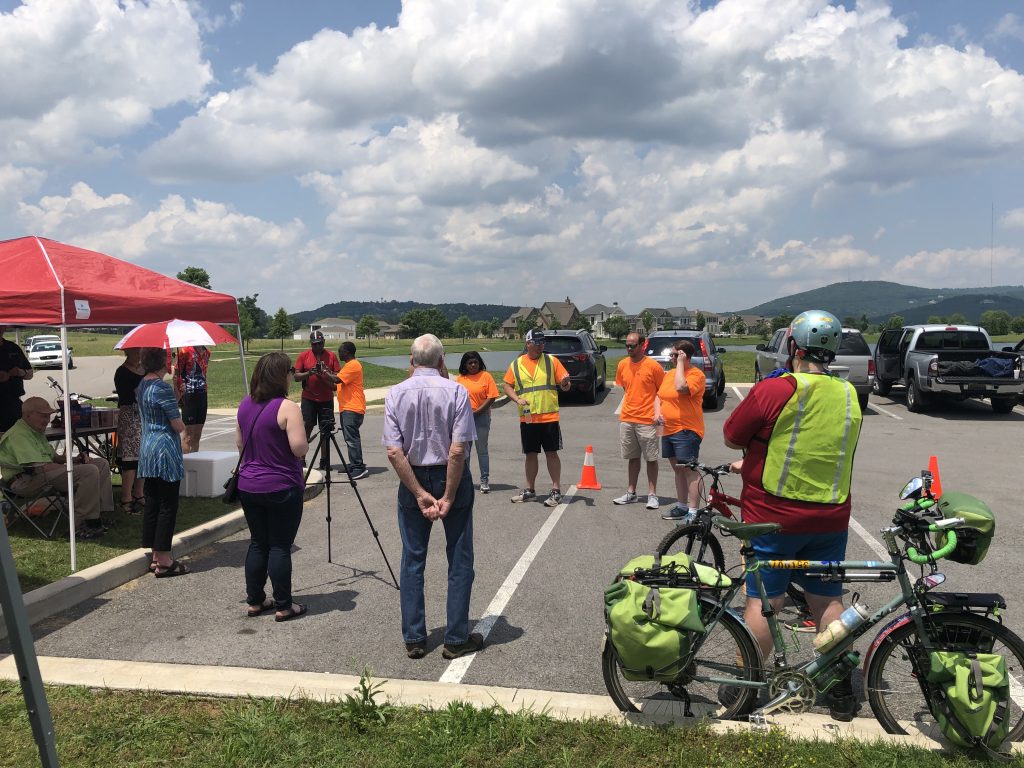 At the launch event for their project, the Huntsville team taught elected officials, partners, and members of the community about the importance of safer street design.

Thanks to feedback from the community on their temporary demonstration project, the Huntsville Team has already made changes and improvements following implementation. For example, they adjusted the height of the RRFB signs to improve visibility of oncoming traffic. They are also exploring other solutions to make permanent improvements at the intersection, such as installing decorative thermoplastic to make the crosswalk more visible and attractive, as well as providing a textured surface to aid people with vision impairments to navigate the crosswalk. Now that they have seen the project on the ground, Huntsville’s traffic department also recently added a curb extension on the north side of the road, which will encourage drivers to slow down as well as shorten the distance people need to cross, greatly reducing stress particularly for older adults worried about racing against traffic.

Based on Huntsville’s experience transforming 4 Mile Post, communities around the country can learn from the following lessons to launch their own safety demonstration projects:

Spread the word about what you are doing and why proactively to elected leaders, department heads, members of the community, and local media outlets. This is particularly important to gain support for projects that balance safety with other trade-offs, or even with just the perception of other trade-offs. If you do not lead with a strong message of safety, people may jump to conclusions and create unnecessary opposition to your project. The Huntsville team, through strong partnerships and persistence, overcame such resistance when decision-makers got the wrong idea that their project would cause significant delays for drivers, but you do not always get a second chance to make a first impression.

2. Use the project as an opportunity to develop new relationships and partnerships.

Demonstration projects are great opportunities to work with community organizations you have not collaborated with previously, or to strengthen existence partnerships. In the case of Huntsville’s project, they worked closely with the South Huntsville Business Association, AARP, and the Rotary Club to engage local residents and business owners, creating new lasting partnerships in the community and in these organizations in the process.

Safety does not happen in a vacuum, and unfortunately the trade-offs that come with safer street design can sometimes seem insurmountable. Decision-makers and community members may resist projects that appear to take time or space away from drivers or that upset prospective voters, especially if they do not understand the importance of these projects for everyone’s safety. Persistence in the face of resistance, proactive communication about the project’s intentions, and especially direct community engagement to inspire new allies and champions for this work all contribute to the success of Huntsville’s demonstration project, in spite of the obstacles they encountered along the way. 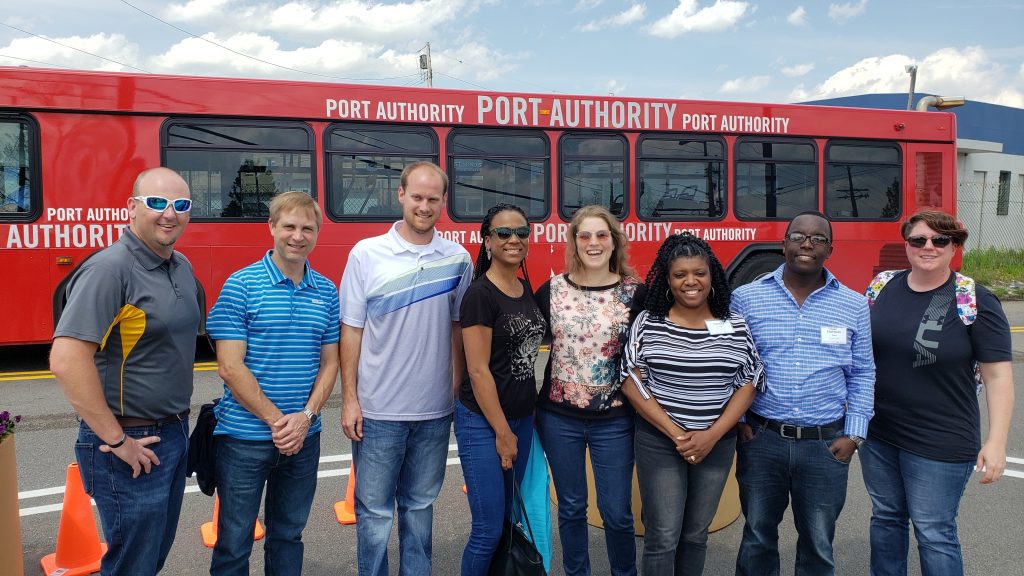 Visiting the other cities in the Safe Streets, Smart Cities Academy inspired the Huntsville team to persevere when they faced resistance to their project.

Reminder: Join us on Thursday, August 1 at 2:00 p.m. to learn more about Huntsville’s street safety demonstration project and similar safety projects from Durham, NC and Pittsburgh, PA that were part of this year’s Safe Streets, Smart Cities Academy.

The Safe Streets, Smart Cities Academy is funded by Road to Zero, a coalition of over 900 organizations committed to reducing traffic fatalities in the United States to zero over the next three decades.