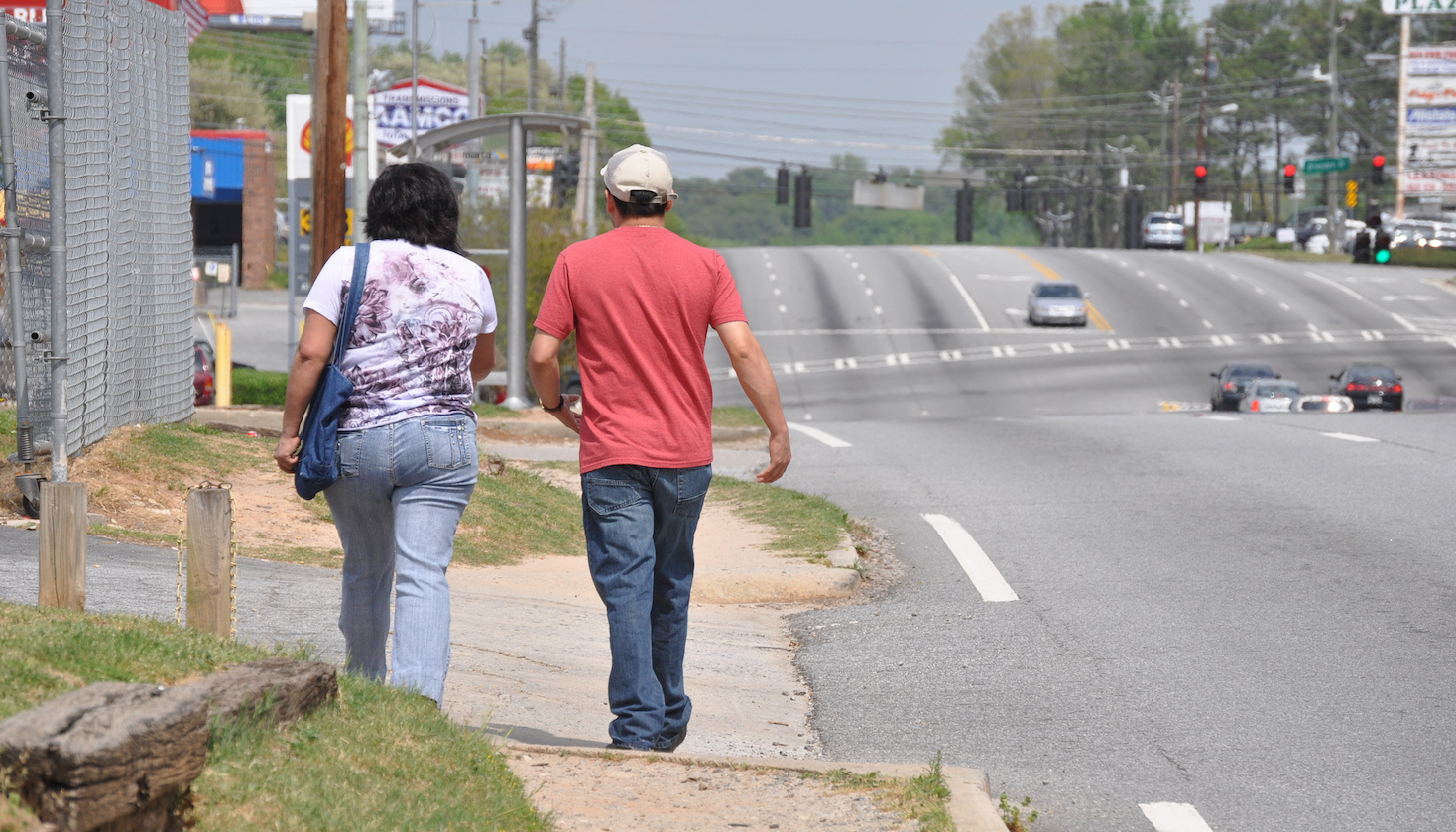 American transportation is rife with inequality that makes it more difficult for low-income people, people of color, and people with disabilities to get where they need to go, and can put them at greater risk. Today’s inequalities reflect the racism and ableism of the era in which much of our network was built, but which also still pervade federal transportation policy. The INVEST Act—a transportation policy proposal in the U.S. House—offers a major first step towards a more equitable transportation system by breaking with many policies of the past.

Instead of ensuring that everyone can get to where they need to go safely and affordably, the American transportation system is designed around the private ownership of expensive vehicles that not everyone can afford or operate. A car is often the price of participating in American life.

Our roads are designed to keep vehicles moving at high speeds, and thousands of people walking, biking, and rolling die each year. The elderly, Black & Native Americans, and low-income communities disproportionately bear the brunt of this carnage. “Walking while black” has become a moniker used to describe the litany of obstacles that Black people often face in our transportation system—from lack of access to basic infrastructure like sidewalks to profiling and disproportionate enforcement in policing.

The widespread lack of accommodations for people with disabilities still makes it exceedingly difficult for many to get to work, the doctor’s office, or the grocery store. How many times have you walked down a sidewalk, if one even existed, only to find a pole in the middle of it, rendering it impassable for someone in a wheelchair? All of these inequities are the result of a series of very intentional decisions that were made decades ago about who and what to prioritize.

A good place to start the work of creating a more equitable system would be overhauling existing federal transportation policy. On this front, the proposal in the U.S. House for a five-year, $500 billion dollar rewrite of transportation policy is promising. Known as the INVEST Act, it offers a significant departure from the status quo. Here’s how.

Today, federal transportation dollars are spent to ensure free-flowing car traffic and the primacy of the car has consequences. Homes and businesses can be bulldozed to widen the road and facilities for people walking and biking become obstacles to travel instead of enhancements, for example. This focus on speed and free-flowing traffic for a single mode of transportation also means that we continue to make decisions primarily to benefit those who drive, leaving behind those who are more likely to walk or take transit, which are more likely to be lower-income people and people of color.

This is perhaps the single greatest change in the INVEST Act to remake transportation policy in a more equitable way. Under the House bill, state departments of transportation and regional planning organizations would have to measure whether all people traveling (not just driving) can reach jobs, schools, groceries, medical care, and other necessities. And they will be penalized if they fail to use federal funding to improve that access. This would make a dramatic shift between measuring the system’s “success” for some people traveling by looking at vehicle speed, and starting to better measure the success for all people by looking at all modes of travel.

Focusing on access by all modes will fundamentally shift the focus of our transportation system to better serve everyone.

Communities around the country will be able to build and repair more transit with additional funding for transit included in the INVEST Act (though funding was boosted across the board, including for highways). Combined with other changes in policy, this money will also be spent in better ways. Instead of always aiming for the lowest cost, the House proposal would instead prioritize greater frequency which rider surveys have consistently shown is the most desired improvement, ensuring that transit is most effective for the people that depend on it the most.

There are also major reforms to the program used to build and expand transit (Capital Investment Grants), like doubling the program’s historically limited funding to about $4.5 billion per year on average and directing the federal government to cover a larger share of the costs—as we have long done for highways. And a new federal transit-oriented development office will help coordinate transit and affordable housing investments to create more walkable, transit-accessible neighborhoods around the country. Coordination is important, because sometimes, rather than building expensive new transportation projects, it’s smarter—and more equitable—to just build more of the things people need closer to where they already are.

All of this would help improve transit and make it a more realistic option for more people, particularly for people of color who are more likely to be transit riders. White people are the only group that is underrepresented on transit compared to their share of the overall population. The INVEST Act also targets some dedicated funding to areas of persistent poverty to help improve transit access for people who most need affordable transportation options.

Biking and walking is the most overlooked and underfunded mode of transportation in existing federal policy, and the INVEST Act makes a number of changes. It starts by preventing states from being allowed to set regressive “safety targets” that assume more people will be struck and killed by drivers in the future (this is currently legal), the victims of which are disproportionately elderly, Black and Native American, and in low-income neighborhoods. States will have to set goals to improve, and will be held accountable for doing so with their money.

It doubles funding for the Transportation Alternatives Program (TAP) which often funds biking and walking projects and adds new prohibitions on transferring those funds to other uses (read: highways) except in very limited circumstances. It also allows federal dollars to be used to create plans for Complete Streets and Vision Zero—an effort to eliminate traffic fatalities—and requires states to conduct vulnerable road user safety assessments.

Importantly, the legislation would also change the way that speed limits are set so that the context of the street will determine the speed limit instead of prioritizing dangerous speeders by setting limits based on how fast drivers choose to drive.

Investing in what we have

Despite a mammoth backlog of repair needs for our nation’s transit systems, roads, and bridges, states continue to spend as much, on average, building new roads and increasing their maintenance needs instead of repairing what we have. Many of the expensive new highway projects that states or metro areas are planning—with funds they could or should be devoting to repair—will exacerbate the very inequities we’ve described. Yonah Freemark’s recent Twitter thread below illustrates how this lack of a fix-it-first requirement (and any requirement for states/metros to prove that they can cover the long-term maintenance costs of a project) allows projects to move forward that bring some minor, fleeting improvements in vehicle travel while bringing displacement, increases in pollution, and disparate impacts on lower-income communities and people of color.

There are highway expansion projects like this being built or planned in cities all across the country. They are extremely costly, have disproportionately negative impacts on low-income & minority communities, and they’re horrible for the environment.

The INVEST Act would divert funds from new roads by dedicating 20 percent of the two biggest sources of state DOT funds to repair, and, thanks in part to an amendment approved last week, requiring states to fulfill a list of conditions before they can add more roads with funds from their biggest sources of highway dollars.

Beyond fixing it first, we certainly need to fix it right. A focus on repair won’t ensure that funding is spent to improve roadway conditions in communities of color. Nor will it alone compel a transportation agency to reverse the generational damage done by infrastructure that divides or disconnects neighborhoods. It would, however, make it much harder to make those same mistakes with new or expanded infrastructure. And when combined with the bill’s shifts toward measuring access for all people by all modes, prioritizing safety for everyone, and increasing funding for transit (and spending it more effectively), as well as other changes, the INVEST Act starts to bring a far more equitable approach to federal transportation investment.

Alone the INVEST Act will not suddenly create an equitable transportation system, nor should it be expected to. Local communities, states, and the federal government have much more work to do to ensure that our transportation and development decisions are equitable and result in inclusive, accessible public spaces. But the INVEST Act does make important structural changes to underlying federal policy, and it will better complement further action at the federal, state, or local levels. We will remain vigilant to help ensure that future proposals identify additional solutions that specifically promote racial equity and equitable opportunity.

The House’s Transportation & Infrastructure Committee wrote the INVEST Act and it’s just one part of a comprehensive transportation policy package. Hopefully other House committees—like Ways & Means, Energy & Commerce, and Financial Services—will be just as bold as Chairman DeFazio and the rest of the committee members have been in rethinking the parts of transportation policy under their jurisdiction.

The INVEST Act would start to turn the surface transportation program toward a more equitable transportation system with policy that was written for this century, replacing policy that has remained largely intact since the 1950s—before the Civil Rights Act, Voting Rights Act, and Fair Housing Acts banned common forms of explicit racial discrimination; before the Americans with Disabilities Act “guaranteed” equal access in transportation.

It’s well past time for our nation to chart a new course with its transportation policy and the INVEST Act represents the best opportunity for reform.