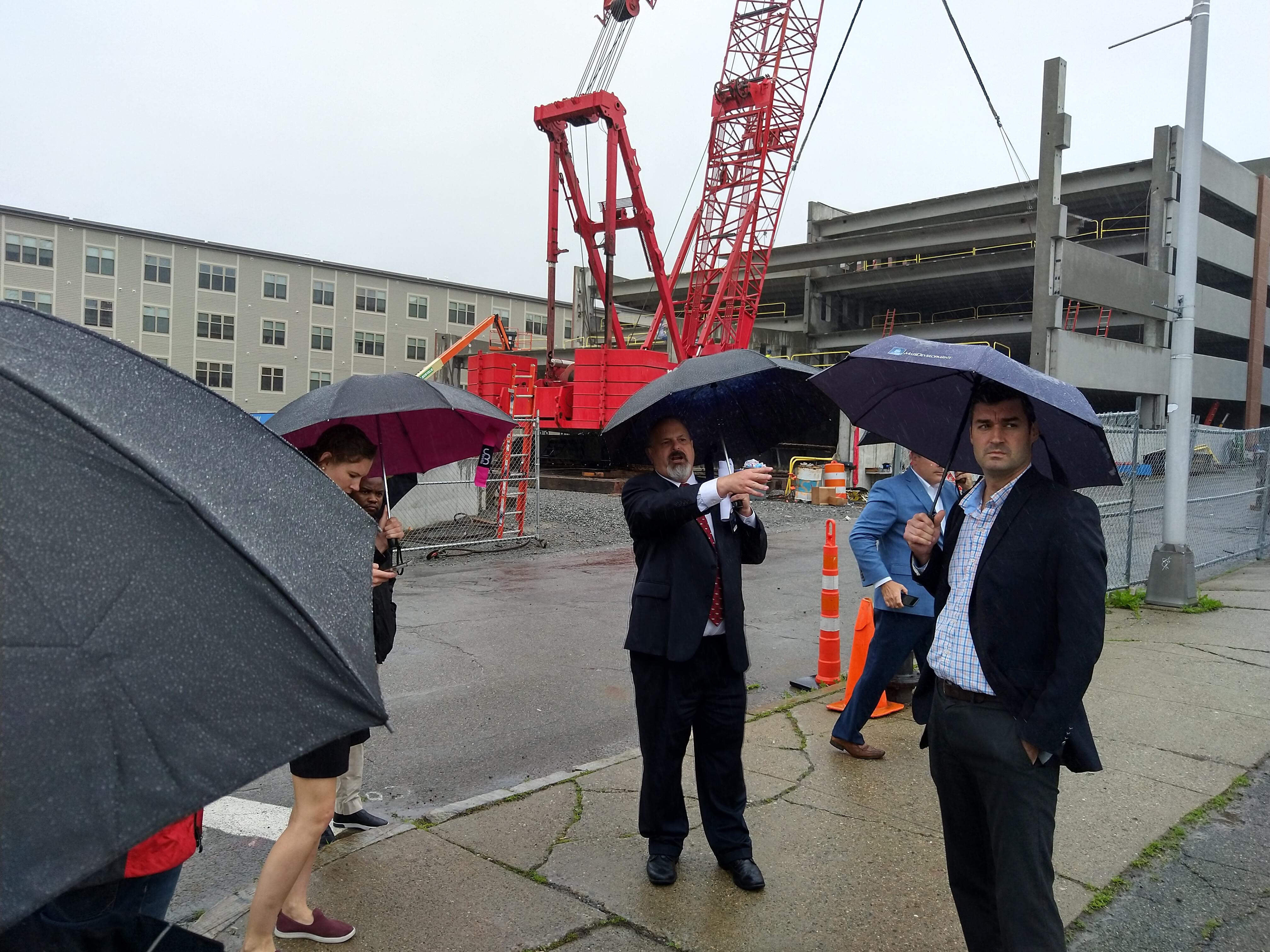 Rob May, Director of Planning and Economic Development for the City of Brockton, guides a walking tour of the city’s downtown Opportunity Zone. (Staff photo)

LOCUS and the City of Brockton, Massachusetts hosted a LinkUP event in June to bring together development professionals and learn more about key parcels in the city’s Opportunity Zones.

On a rainy June morning, leaders from LOCUS Massachusetts met with a variety of state, regional, and local development professionals to learn more about Opportunity Zone development in Brockton, MA. The meeting began with a presentation by Rob May, Brockton’s director of planning and economic development, and George Durante, a transformative development initiative fellow with MassDevelopment, which showcased recent developments in Brockton’s downtown and sites where the city is hoping to encourage more walkable investment.

The presentation was followed by a walking tour of the city’s downtown Opportunity Zone, guided by May, and a lunch reception. The event gave developers and real estate professionals the chance to see available sites in person, hear from planning officials on their vision for the downtown, and network with potential partners.

LOCUS Mass Chapter President Doug Landry spoke about financial incentives available to developers, and LOCUS Mass Director Elijah Plymesser stressed the importance of utilizing the state’s Housing Development and Incentive Program, available to developers in “Gateway Cities.” May and Durante laid out a strong case for Brockton; with three commuter rail stations, a 35-minute commute to Boston’s South Station, and a dense, walkable downtown showcasing historic architecture, the city is primed for more development as the cost of housing and commercial space in Boston increases.

Recent developments, like Trinity Financial’s Enterprise Center, have relied on a “seven layer dip” of local, state, and federal subsidies to make the numbers work. According to a recent report on the development potential of Gateway Cities by MassINC, demand around commuter rail stations in these areas has not yet reached a tipping point: “Currently, real estate economics do not reflect demand for Gateway City TOD: station area rents are simply too low to support substantial rehab or ground-up new development. However, this could change markedly as the innovation economy continues to expand.”

The report concludes that TOD in these areas would have significant environmental and fiscal benefits, and would help to increase equity by creating jobs in economically-depressed areas. Opportunity Zones offers another incentive to invest in the city, and officials hope that as developers learn more about the program, they will recognize the unique potential that Brockton offers.

As the crowd wandered down Main St, past Elvera’s cafe and Capiello Brothers Boxing Gym, they stopped at an abandoned lot that had been recently been cleared of debris. Durante explained that starting in July, the lot will be the site of PROVA!, a pop-up beer garden which will feature local food and entertainment. The city hopes that these efforts, combined with new incentives for development, will lay the seeds to bring back life to its long-neglected downtown. LOCUS Mass was proud to help facilitate the event. If your city or town is interested in hosting a similar event, please contact LOCUS Mass Director Elijah Plymesser.