The $1.2 trillion infrastructure bill awaiting the president’s signature is notable both for Congress’ most significant commitment yet to address climate change, and its general failure to do anything to fundamentally change the sources of the problem and reach the level of ambition required.

This bipartisan infrastructure deal (the IIJA), approved by Congress on November 5, will invest an unprecedented $1.2 trillion over the next five years (through the 2026 fiscal year.) On top of a conventional five-year transportation authorization embedded in this larger bill, the infrastructure bill includes $550 billion in new money to invest in transportation, water infrastructure, climate change, other environmental programs, broadband and resilience.

“After watching climate-related legislation crash and burn in Congress several times, it’s a major feat to see a bipartisan majority approve a bill that makes major investments in infrastructure and tackling climate change, and we celebrate that important and powerful precedent,” said Calvin Gladney, president and CEO of Smart Growth America. “This administration is incredibly confident that this ambitious bill is going to move the needle on their key priorities of addressing climate change, improving the state of our country’s infrastructure, advancing racial equity, and expanding access to opportunity. We agree, but they’ve painted themselves into a corner by failing to make any major reforms to the core transportation programs which have been making all of those problems worse for years, supercharging them with new funding instead. The states and metro areas who will largely decide how and where to invest this money will largely determine whether the administration succeeds or fails on all their goals.”

There are countless long explainers about this bill out there this week (this one from NACO is very good!) but we want to highlight four important things to know:

We need to reduce emissions from transportation (more on that in #4 below), but we also need to update and protect our existing infrastructure from the climate related shocks that are already here and will be coming soon. IIJA has been heralded as the federal government’s biggest investment yet in climate adaptation and protection. Knowing where climate- and weather-related events are likely to be worse is a vital first step here, and the National Oceanographic and Atmospheric Administration (NOAA) will invest $492 million in flood mapping and water modeling which could inform future infrastructure planning and investment. The new PROTECT program dedicates $7.3 billion (about 2.9 percent of each state’s share of all highway funds) and $1.4 billion in competitive grants to shore up and improve the resilience of the transportation network, including highways, public transportation, rail, ports, and natural barrier infrastructure.

This deal expands upon the existing Alternative Fuels program and recalibrates it to focus more (though not exclusively) on zero-emission vehicles and related infrastructure. The IIJA also creates a Carbon Reduction program which dedicates ~2.5 percent of each state’s apportionment of highway funds (~$6.4 billion total) to support active transportation, public transit, congestion pricing, and other strategies to reduce carbon emissions. (Meanwhile, the core highway program will continue making emissions worse.)

All of this represents a positive first step in federal recognition of the severity of the impacts of climate change, but it is still not scaled to the level of risk that we face, though we applaud Congress for taking a bipartisan step on climate change.

As SGA President and CEO Calvin Gladney wrote (during the first of many “infrastructure weeks” that followed), “we need to legislate, make policy, and think in a more interconnected fashion” when it comes to infrastructure.  While this bill fails to reach the level of ambition on that count contained in the House’s superior framework for infrastructure, it’s absolutely progress for Congress to consider broadband, climate resilience, and restoring old contaminated land alongside more conventional transportation infrastructure. How we invest in the former shapes our decisions with the later, and vice versa.

3) Transportation policy/funding is largely settled until 2026

So other than the annual appropriations process where Congress decides funding levels for some discretionary programs like the transit capital construction program or BUILD grants, funding and policy decisions are done for five years, and the focus now moves to implementation, i.e., how this money gets spent and where, and we should note:

This money is flowing out the door already.

4) The failure to upend the status quo and require states to address repair, improve safety or access, or reduce emissions from transportation—the leading contributor, will make it incredibly hard to move the needle on those issues. 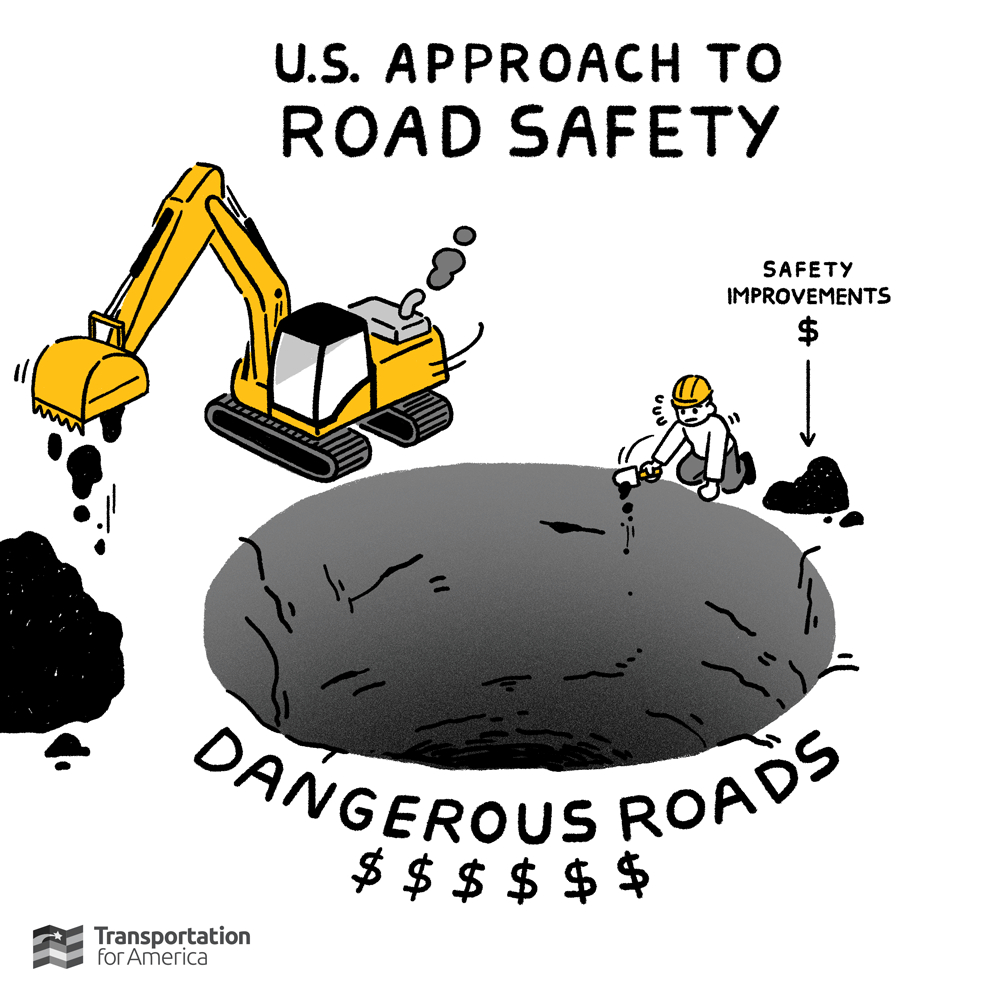 When it comes to transportation, we’d direct you to our Transportation for America program’s extensive coverage of the IIJA for more detail. Join their email list and read their coverage on their blog.

Because Congress ignored the House’s superior five-year INVEST Act proposal and used the Senate’s inferior five-year proposals as the starting point to include in the IIJA, the IIJA failed to make any significant changes to the core transportation programs that are responsible for the problems we see in transportation now.  The bill has a lot of exciting wheelbarrows of new money, but unfortunately it also includes a lot of excavators for the status quo, as shown in this excellent cartoon at right from Transportation for America:

“As we have stated before, the transportation portion of the infrastructure bill spends a lot of money but fails to target it to the needs of the day: building strong economic centers, providing equitable access to opportunity, addressing catastrophic climate change, improving safety, or repairing infrastructure in poor condition,” said T4America Director Beth Osborne after the bill’s passage.

“The administration is confident they can make substantial progress on all of these goals despite those deficiencies. Most states are promising to use the flexibility they fought for to make marked improvements across these priorities. To make that happen, both the administration and the states will need to make major changes to how they approach transportation, but we know they can do it,” she said.

Smart Growth America celebrates some of the notable precedents and incremental improvements contained in this bill and the overall commitment to invest in infrastructure, but we lament the failure to truly put our country’s status quo approach to transportation in the rearview mirror—where it belongs.