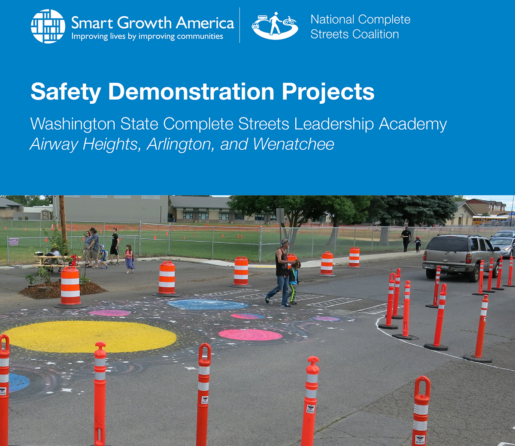 Three smaller Washington cities—Airway Heights, Arlington, and Wenatchee— came together to learn from the Coalition and one another while building their skills in safer street design, creative placemaking, and community engagement through quick-build pilot projects. This tells the story of their demonstration projects.

You can download the full PDF with the link on this page, or just read and share the three individual stories from our blog:

More about the demonstration projects

Even during a decades-long increase in the number of people struck and killed while walking, our streets got even more dangerous during the COVID-19 pandemic as congestion disappeared and speeds increased. But not every city stood pat. Three smaller communities in Washington State that experimented with creative approaches to safer street design during the pandemic, showing their residents what is possible through fast, flexible design interventions.

In early 2020, our National Complete Streets Coalition (NCSC) launched the Washington Complete Streets Leadership Academy. We chose three small cities with Complete Streets policies on the books—Airway Heights, Arlington, and Wenatchee—to learn from us and one another while collectively building their skills in safer street design, creative placemaking, and community engagement through quick-build pilot projects. And then COVID put the brakes on before things got fully underway in March 2020.

Restarting a year later in 2021, the Academy became perhaps even more fruitful as communities everywhere were making unprecedented innovations in the use of public space during the pandemic.

Quick-builds, also known as demonstration projects or tactical urbanism projects, are temporary, low- cost improvements that test changes to street design, allowing communities and transportation departments to try new ideas and gather feedback about a tangible redesign concept before proposed changes are made permanent. They also provide elected officials a low-risk method to see how their community reacts before committing to a permanent solution or policy change. But every single one of these projects also incorporated proven methods to reduce crashes, injuries, and fatalities, documented by the Federal Highway Administration (FHWA).