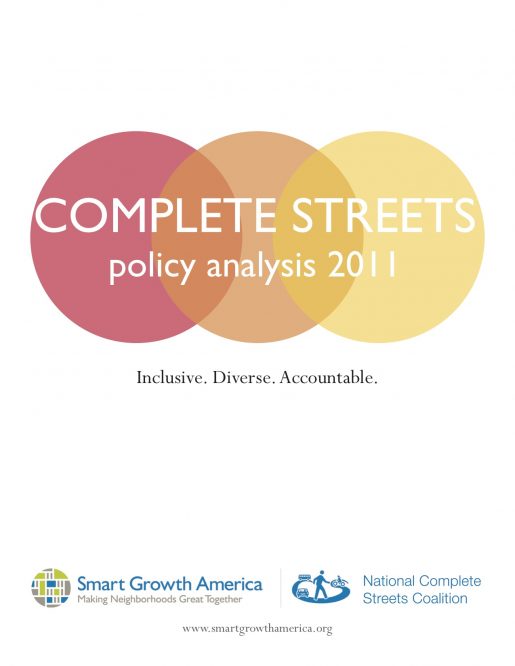 Hundreds of communities of all sizes, in all parts of the country, see their streets as something more than just a way to move people in cars from point A to point B. More than 350 have adopted Complete Streets policies – with 146 of those policies adopted in 2011 alone. These communities have joined a growing national movement for Complete Streets, a movement that encourages and provides for safe access to destinations for everyone, regardless of age, ability, income, ethnicity, or mode of travel.

A Complete Streets approach redefines what a street is intended to do, what goals a transportation agency is going to meet, and how the community will spend its transportation money. It breaks down the traditional separation of ‘highways,’ ‘transit,’ and ‘biking/walking,’ and instead focuses on the desired outcome of a transportation system that supports safe and universally inclusive roadway use.

This report documents the growth of that diverse movement and its strengths by analyzing the more than 350 existing written policies adopted by states, regions, counties, and communities before January 1, 2012. Policies that come closest to meeting the ‘ideal’ are highlighted. Used in conjunction with the Complete Streets Local Policy Workbook, this report is also a useful tool for communities looking to develop their own Complete Streets policy based on current best practices. Many examples in this report come from policies adopted in 2011, in part because so many strong examples were adopted last year.