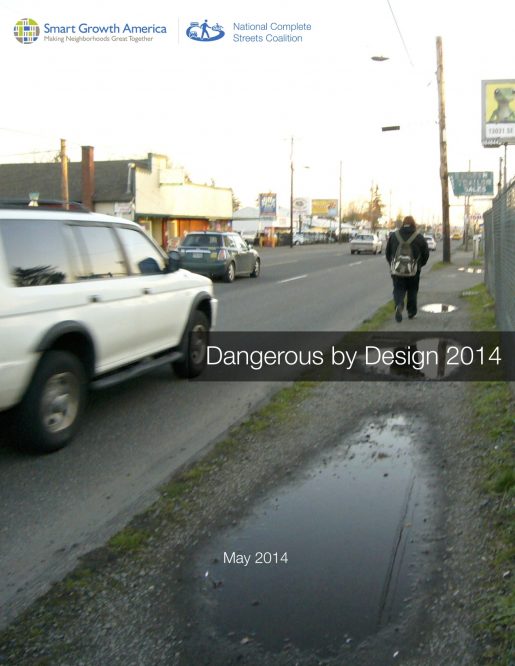 A national epidemic of pedestrian deaths
 American communities are poised for a renaissance in walking. We’re walking more often, for fun and to get to places in our neighborhood. We turn to WalkScore when figuring out where to live and our most walkable places often are among the most economically vibrant in the country. Hundreds of cities have adopted Complete Streets policies to ensure walking is in the forefront of our decisions regarding street design. Public health officials from the Office of the Surgeon General to the local doctor’s office are encouraging us to get out for a walk for physical activity and to combat chronic disease.

But we are still dealing with a legacy of roadways that fail to account for the safety of people on foot. In the decade from 2003 through 2012, more than 47,000 people died while walking on our streets. That is 16 times the number of people who died in natural disasters during in the same ten years, but without the corresponding level of urgency.

In 2012, pedestrians accounted for nearly 15 percent of all traffic deaths, up 6 percent from 2011 and representing a five-year high.

Dangerous by Design 2014 takes a look at where these fatalities happen and who’s most at risk, presenting data from every county, metro area, and state. As in past years, Sunbelt communities that grew in the post-war period top the list of most dangerous regions. These areas developed rapidly, with many low-density neighborhoods overly dependent on extra wide, fast arterials to connect homes, schools, jobs and shops. Such roads rarely feature the facilities needed for safe travel by foot. The report also calls out the unacceptably high number of pedestrian deaths seen in nearly every major metro region.

The fact is that even our most walk-friendly communities can—and must—do more. More than half of all pedestrian fatalities occur on arterials, and over 60 percent of these tragedies occur on roads with speed limits of 40 mph or higher. These roads were not planned or designed for more than speeding traffic.

The thing is: we know what needs to be done. We know that street design is the most important approach in making our streets safer—and we know how to plan, design and operate our streets to be safer.

Across the country, communities have put increasing emphasis on building Complete Streets in recent years—including major efforts throughout the state of Florida and in many of the cities highlighted as the most dangerous. But this is also more than just a local issue—with two-thirds of pedestrian deaths occurring on roads that were eligible for federal funds and built under federal guidance, it’s clear that this epidemic of fatalities demands a national response.

The second edition of Dangerous by Design was released in 2011. Read the 2011 edition ››

The first edition of Dangerous by Design was released in 2009. Read the 2009 edition ››