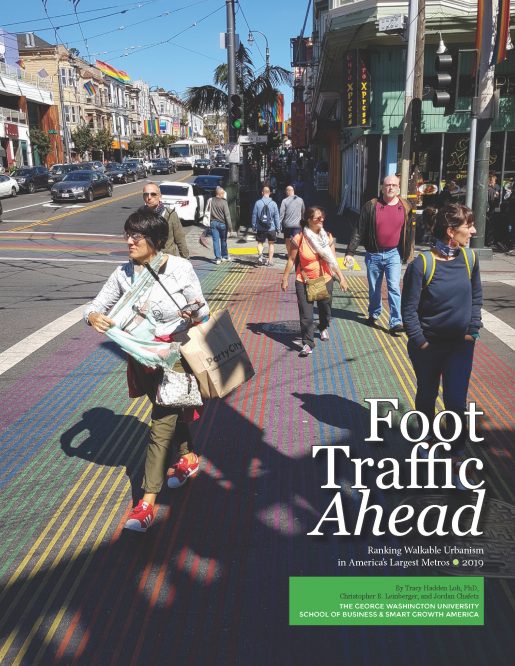 Foot Traffic Ahead 2019 ranks the 30 largest metros in the United States based on the percentage of office, retail and rental multi-family space each metro has in their walkable urban places (WalkUPs). The report powerfully illustrates the price premiums investors and buyers are willing to pay to live or work in walkable, transit-connected neighborhoods—and why we urgently need to build more of them.

There are 761 regionally significant WalkUPs in the 30 largest metropolitan areas in the United States. These WalkUPs occupy less than one percent of the total land mass in these metros, but deliver outsized economic performance.

Based on the share of office, retail, and rental multi-family occupied square footage in WalkUPs relative to the metro region as a whole, the top regions are 1) New York City, 2) Denver, 3) Boston, 4) Washington, DC, 5) San Francisco Bay Area, and 6) Chicago.

Drivable sub-urban real estate products have been losing market share to walkable urban real estate products in all 30 metros. In some metros, walkable urban places have accounted for almost 100 percent of net new office and rental multi-family space while drivable sub-urban places have added no new space or lost occupancy since 2010.

This report indicates that the highest-ranked walkable urban metros are models for the future development patterns of many U.S. metros. Conversely, metros such as Tampa, Orlando, and Phoenix have an uphill climb to create walkable places. However, these low-ranking metros have also demonstrated an inability or unwillingness to change by continuing to promote drivable sub-urban sprawl through public policy and infrastructure investments.

It should be noted that this analysis specifically examines office, retail, and multi-family income-producing properties, and does not include single-family for-sale homes, which are a primary driver of sprawling development. Drivable sub-urbanism, i.e. sprawl, is and has been systematically subsidized by federal, state, and local governments for more than half a century. This leads to the question of whether drivable sub-urban development patterns should continue to be subsidized, especially when the commercial real estate market is increasingly demanding walkable urbanism.

Meeting this pent-up demand for new WalkUPs would create a new economic foundation for the U.S. economy, one far more resilient than one predicated on suburban growth.

This analysis also ranks WalkUPs in the 30 largest U.S. metros on a Social Equity Index based on housing and transportation costs and the rental/for-sale housing mix.

Counterintuitively, New York City and Washington, DC top the list despite their substantial rent premiums. However, transportation costs are dramatically lower in their WalkUPs (compared to their drivable sub-urban areas) due to more diverse and less expensive transportation options like transit, biking, and walking

Even if a metro is highly ranked on social equity, aggressive affordable housing programs are needed in the short-term to allow lower income households to live in WalkUPs. The long-term solution to the high cost of housing in WalkUPs is to build more housing, make more walkable urban land available, and improve wages for working people. Exclusionary zoning and the lack of experience of the real estate development industry in building walkable urban product in many metro areas is an obstacle.