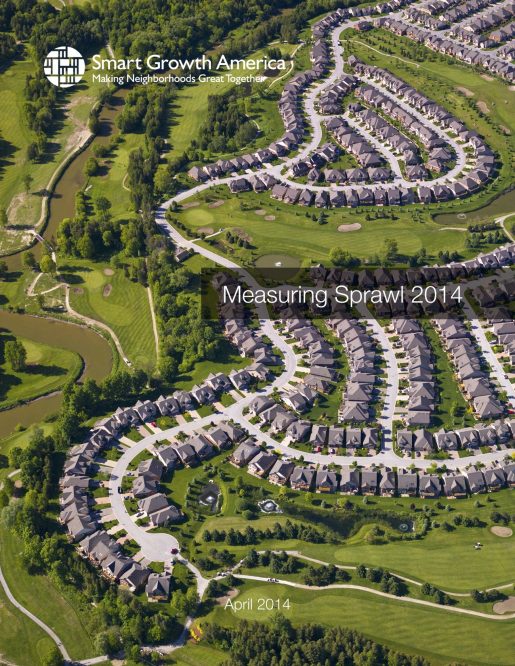 Some places in the United States are sprawling out, some places are building in compact and connected ways, and the difference between these two strategies affects the lives of millions of Americans.

In 2002, Smart Growth America released Measuring Sprawl and Its Impact, a landmark study that has been widely used by researchers to examine the costs and benefits of sprawling development. In peer-reviewed research, sprawl has been linked to physical inactivity, obesity, traffic fatalities, poor air quality, residential energy use, emergency response times, teenage driving, lack of social capital and private-vehicle commute distances and times.

Measuring Sprawl 2014 updates that research and analyzes development patterns in 221 metropolitan areas and 994 counties in the United States as of 2010, looking to see which communities are more compact and connected and which are more sprawling. Researchers used four primary factors—residential and employment density; neighborhood mix of homes, jobs and services; strength of activity centers and downtowns; and accessibility of the street network—to evaluate development in these areas and assign a Sprawl Index score to each. This report includes a list of the most compact and most sprawling metro areas in the country.

This report also examines how index scores relate to life in that community. The researchers found that several quality of life factors improve as Sprawl Index scores rise. Individuals in compact, connected metro areas have greater economic mobility. Individuals in these areas spend less on the combined cost of housing and transportation, and have greater options for the type of transportation to take. In addition, individuals in compact, connected metro areas tend to live longer, safer, healthier lives than their peers in metro areas with sprawl. Obesity is less prevalent in compact counties, and fatal car crashes are less common.

Finally, this report includes specific examples of how communities are building to be more connected and walkable, and how policymakers at all levels of government can support their efforts.