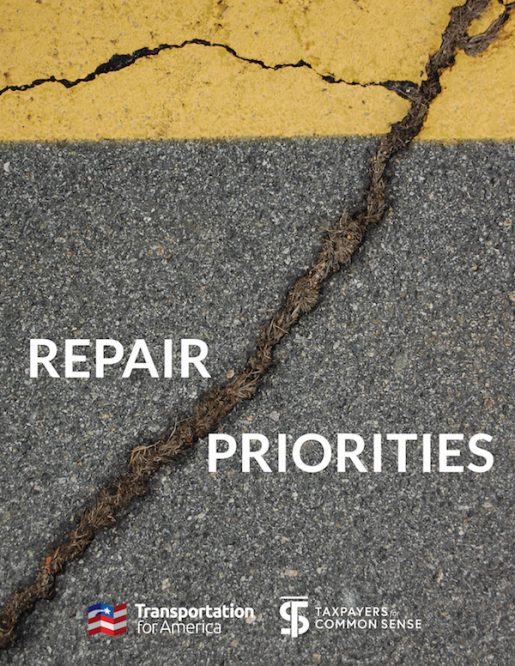 The nation’s roads are deteriorating, contributing to a looming financial problem. When the first edition of Repair Priorities was released in 2011, the condition of the nation’s road network was a direct reflection of decades of underinvestment in repair. In the years since, policymakers continue to pay lip service to the notion of prioritizing repair and “fix-it-first,” yet we have little to show for the rhetoric. The latest data in this report shows that the conditions of our roadways have not improved, perpetuating a costly backlog of roads in poor condition. Congress provides states with billions in formula funding that they are free to use for maintenance. Yet, despite the backlog, states continue to spend a significant portion of funding to build new roads, creating costly new maintenance liabilities in the form of new roads and lane-miles.

Between 2009 and 2017, the percentage of the roads nationwide in poor condition increased from 14 to 20 percent. The percentage of roads in “good condition” increased only slightly: from 36 to 38 percent over that eight-year period.

This is especially concerning given that Congress provided additional federal funding for transportation infrastructure twice over that time period. We also benefited from the one-time boost provided by the 2009 American Recovery and Reinvestment Act, which significantly
increased the funding available for road repair for several years. Despite these injections of funds, states prioritized new or expanded roads and failed to make a dent in the backlog of roads in poor condition.

Because of this, we are facing a looming spending gap. As of 2017, Transportation for America estimates that we would need to spend $231.4 billion per year just to keep our existing road network in acceptable repair and bring the backlog of roads in poor condition into good repair over a six-year period, the typical length of a federal transportation reauthorization. It is significantly more expensive to rehabilitate roads that have fallen into poor repair than to preserve roads in good condition on an ongoing basis through routine pavement preservation. By comparison, all highway capital expenditures across all government units totaled $105.4 billion in 2015, only a portion of which goes to repair.

This is more than a money problem—it’s a priorities problem. States are spending just as much on road expansion as road repair.

These investments in expansion don’t just redirect funds away from much needed investments in repair; they continually grow our annual spending need, widening the gap. Every new lane-mile of road costs approximately $24,000 per year to preserve in a state of good repair. By expanding roads, we are borrowing against the future.

So what will it take to fix the system?

Transportation for America and Taxpayers for Common Sense are calling on Congress to address this in any infrastructure package they consider, including the upcoming 2020 federal transportation bill. Congress should take the following actions in the 2020 transportation bill to get us back on track:

Repair Priorities 2019 provides a national snapshot and state-by-state evaluation of current roadway pavement conditions, spending trends, and unmet needs. It also recommends crucial actions federal policymakers should take in the next transportation reauthorization bill to get the nation’s roads—and spending priorities—back on track.