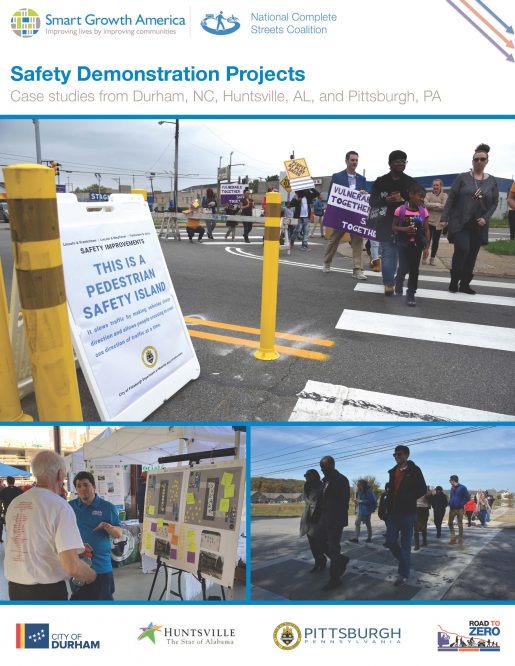 In the past three years, drivers struck and killed more people walking than in three decades. This happens in part because we continue to design our streets to prioritize moving cars—not people—as quickly as possible, creating a dangerous, high-speed environment for all people who use the street. To test out creative approaches to safer street design, the National Complete Streets Coalition launched the Safe Streets, Smart Cities Academy. We worked with three cities around the country to build skills in safer street design, creative placemaking, and community engagement, then helped the cities put these skills into practice.

Through demonstration projects, the Cities of Durham, NC, Huntsville, AL, and Pittsburgh, PA transformed their streets and intersections into slower, safer places for people. Communities around the country can learn from the stories of these demonstration projects to test out low-cost ways to create safer streets.

These case studies highlight lessons learned from these demonstration projects, including how the projects helped these cities build trust with the community and with other jurisdictions, test out new approaches for safer street design and make quick adjustments as needed, and change the conversation about the importance of slower, safer streets.

You can download the full report here, or read each case study on our blog:

The City of Durham recognized their demonstration project as an opportunity to try out more intensive, inclusive methods of community engagement to reach segments of their community they have not connected with in the past. They identified a dangerous site along West Club Boulevard, where a frequently used bus stop across from a shopping mall offered no safe, convenient way for bus riders to cross. The team conducted intercept surveys at the bus stop to learn more about the safety challenges people experienced and to guide the design of their demonstration project. Based on these insights, the team reduced the number of lanes on West Club Boulevard and installed a new mid-block crossing, resulting in safer, slower driving speeds and better yielding to people crossing. The project also spurred important conversations and partnerships with bus riders and with a local bike advocacy group.

The City of Huntsville partnered with the South Huntsville Business Association, AARP, and the Rotary Club to implement a demonstration project on 4 Mile Post. The project makes it easier and safer for people to walk or bike along and across the street, and it also restores missing connections between nearby destinations, including homes, parks, trails, and employment centers. Along the way, the team faced resistance from elected leaders outside the project area who opposed any project—even a temporary one—that would take space away from cars, but thanks to their persistence and close engagement with the community, they won the support they needed to install temporary safer streets improvements on 4 Mile Post and to work toward making these changes permanent

The City of Pittsburgh historically relied on 311 requests to help decide which streets need safety improvements, but when a team from the city looked more closely at the data, they realized they were not reaching the whole community through this process. In particular, they were not addressing key locations with high crash rates in low-income communities of color because this traditional channel of collecting complaints. In partnership with the Southwestern Pennsylvania Commission, the Allegheny County Health Department, the Port Authority of Allegheny County, and PennDOT, they launched a demonstration project at one such site to implement safety projects and to establish new partnerships with the community. Working closely with a local school, they added crosswalks with protected refuges to help children reach school more safely, and they also redesigned the intersection of Lincoln and Frankstown Avenues to make it less stressful for all people—including drivers—in the process.