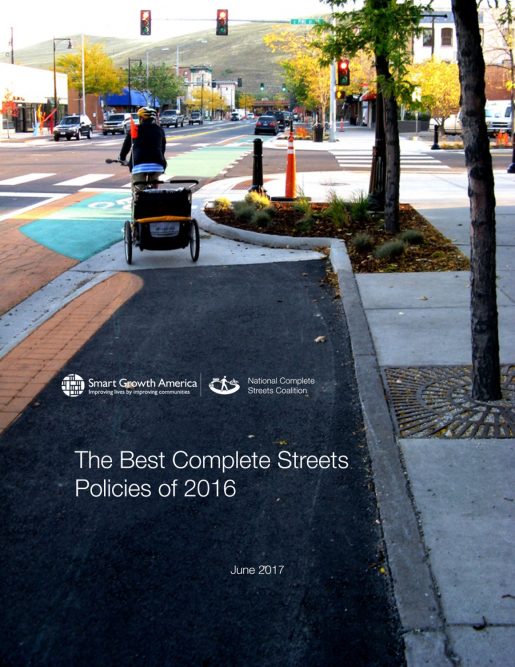 The Best Complete Streets Policies of 2016

As of the end of 2016, more than 1,000 jurisdictions in the United States have made formal commitments to streets that are safe and convenient for everyone—no matter their age, income, race, ethnicity, physical ability, or how they choose to travel—by passing a Complete Streets policy.

More communities passed these policies in 2016 than ever before. Communities adopted a total of 222 new Complete Streets policies that year. Nationwide, a total of 1,232 policies are now in place, in all 50 states, Puerto Rico, and the District of Columbia, including 33 state governments, 77 regional planning organizations, and 955 individual municipalities.

By passing strong Complete Streets policies these communities are making a clear commitment to streets that are safe and convenient for everyone. And they do so at a time when our country desperately needs safer options for biking and walking. As a nation we face an epidemic of obesity and its related illnesses. The U.S. Surgeon General has recommended making biking and walking a routine part of daily life to help address this, yet in too many communities streets are not built to safely accommodate these activities. Our recent report Dangerous by Design 2016 outlined the enduring problem of pedestrian fatalities in the United States, and highlighted the 46,149 people who were struck and killed by cars while walking between 2005 and 2014. Over that period Americans were seven times as likely to be killed as a pedestrian than by a natural disaster.

Dangerous by Design also showed that people of color and older adults are overrepresented among pedestrian deaths, and that pedestrian risk is correlated with median household income as well as rates of uninsured individuals. That means people of color most likely face disproportionately unsafe conditions for walking, and low-income metro areas are predictably more dangerous than higher-income ones.

Because of this context, for the first time this year we looked at the income and racial demographics of the communities included in our analysis. The data showed that 2016 communities were, on average, slightly more white and more wealthy than the United States as a whole. The average racial makeup of communities that passed or updated a Complete Streets policy in 2016 was 76.3 percent white, 10.3 percent Black or African American, 0.8 percent American Indian, 5.3 percent Asian, 0.1 percent Pacific Islander, 4.1 percent Other, and 3.1 percent two or more races. In all, 77 percent of localities that passed policies in 2016 had white populations greater than the national average of 73.6 percent. The median household income of communities that passed or updated a policy in 2016 was $59,347, about 10 percent above the national average of $53,889.

Taken together, it is clear that communities are consistently passing stronger and more effective Complete Streets policies. This is an outstanding accomplishment, and one which we could not be more proud and honored to celebrate. It is also clear that our challenge now is to help communities of all income levels and ethnicities benefit from this progress equitably.

Toward that goal, the National Complete Streets Coalition is in the process of updating our policy scoring rubric to give more weight to equity considerations as well as implementation. We will make the new standards public later this year, and will begin using the updated rubric moving forward.

Congratulations to all the jurisdictions that passed Complete Streets policies in 2016, particularly those receiving the highest scores in the Coalition’s analysis. You are setting an example for communities everywhere to follow, and we look forward to working with other communities on passing new policies and putting them in to practice in the year to come.