While participating in Smart Growth America/LOCUS’s Massachusetts Opportunity Zones Academy, the City of Salem focused on an underutilized plot of land adjacent to a proposed commuter rail station, and how they could encourage equitable new investment around it. LOCUS’s technical assistance presented the city with three different development scenarios to consider for future development spurred by Opportunity Zones.

This post is part of a series summarizing the experience and outcomes of the inaugural class of Smart Growth America and LOCUS’s  Massachusetts Opportunity Zones Academy. Read about Salem, and be sure to check out the posts for Barnstable-Yarmouth, Fitchburg, and Greenfield-Montague. 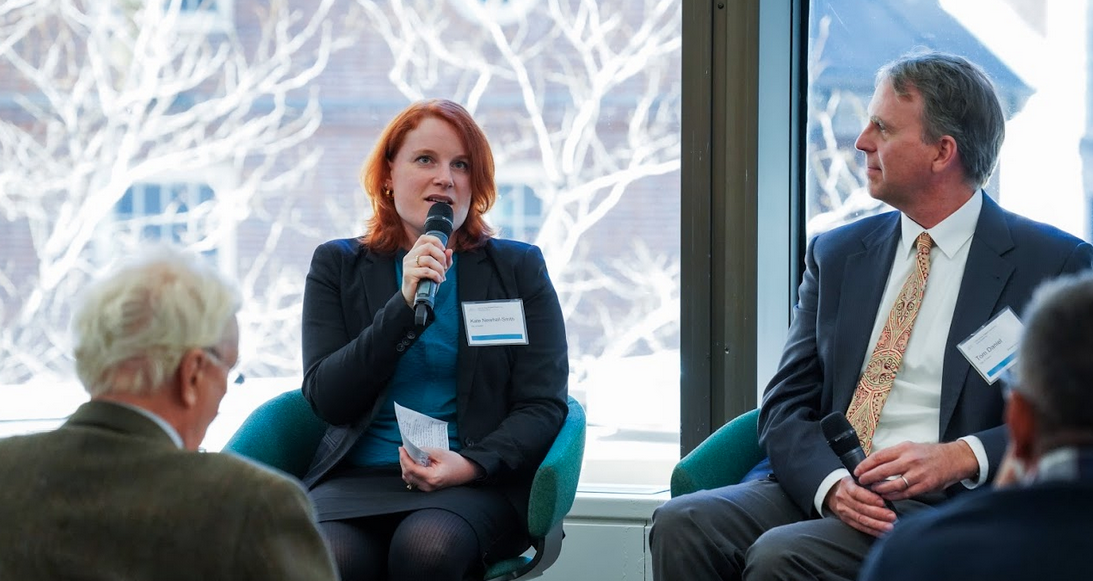 Left to right: Salem’s Principal Planner Kate Newhall-Smith and Director of Planning & Community Development Tom Daniel sharing an overview of their experience from the Academy at the Massachusetts Opportunity Zones Convening in November 2019.

The City of Salem is in a unique position regarding Opportunity Zones. Out of the two Opportunity Zones within the city, the larger, southernmost census tract includes the site of the proposed South Salem Commuter Rail Station, which would add an additional stop on the commuter rail line that runs to and from Boston and Newburyport/Rockport. This presents exciting potential for Salem to use the Opportunity Zone tax incentive to bring transit-oriented development, workforce housing, and value capture to Salem. 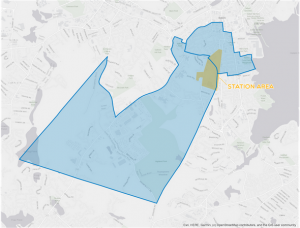 During the Massachusetts Opportunity Zones Academy, Salem sought to analyze the regulatory framework for the parcels surrounding the proposed South Salem Commuter Rail Station area to help create a high-density, mixed-use neighborhood. The city also sought new ways to educate local land owners, anchor institutions and other development stakeholders on the return on investment and community benefit potential that Opportunity Zone projects have to offer.

Over the summer, Smart Growth America (SGA) and the City of Salem worked together to model the ways in which the parcels adjacent to the proposed station could be developed into a smart growth hub under existing and proposed land-use, zoning, and regulatory frameworks, as well as the Opportunity Zones tax incentive. SGA came up with three different development scenarios for the area, demonstrating how increases in density and uses affect the fiscal return of the development.

This scenario assumed no changes to Salem’s existing industrial zoning of the South Salem Commuter Rail Station, but did assume increased industrial development. This scenario would lead to no change in the type of activity that currently goes on in this area.

This scenario assumed two-story, mixed-use buildings added to the north of the proposed station area, with industrial structures being added to its south. Diversifying the type of development permitted in this area would give the city more opportunity to achieve their growth and development goals, including new affordable housing in proximity to public transit and other services.

This scenario assumed three-story mixed-use buildings to the north of the station with a central public space, and industrial and live-work industrial buildings to the south. This would be a more intense version of the second option, creating an even greater sense of community within the area adjacent to the proposed station.

Analyses of the three scenarios concluded that higher mixed-use densities would yield higher surrounding property values and higher tax revenues for the city. The scenarios also demonstrated the type of transit-oriented, mixed-use development that will maximize activity around the proposed station.

In September 2019, SGA and the City of Salem hosted two public meetings, one for local property/land owners and job-creating institutions, such as North Shore Medical Center and Salem State University, and the other for community members. The first meeting, which had over 50 participants, began with an introduction from Mayor Kim Driscoll and was followed up by a presentation from SGA about the development scenarios they came up with. This led to a discussion on how stakeholders could contribute their resources to Opportunity Zone development and investment, which is particularly important in the shaping of Salem’s future development considering that a significant number of their Opportunity Zone parcels are privately owned. The community member meeting had 30 attendees, and focused on the mechanics of the Opportunity Zone tax incentive and best practices from communities similar to Salem from other parts of the country.

With the academy wrapped up, local leaders and advocates in Salem are going to focus on the proposed commuter rail station, continue reaching out to state and local partners, integrate SGA’s Opportunity Zone Marketplace into the city’s economic development toolkit, and continue evaluating Salem’s regulatory framework to ensure that it aligns with their equitable development vision. It will be interesting to see how the City of Salem will choose to utilize the Opportunity Zone tax incentive in the development of the South Salem Commuter Rail Station. Seeing as Salem already has so many establishments that bring people there, like their historic downtown, Salem State University and the North Shore Medical Center, it seems reasonable to assume that any mixed-use development brought about with a new commuter rail stop would gain a lot of traction.