Seen and heard at the 2018 LOCUS Leadership Summit 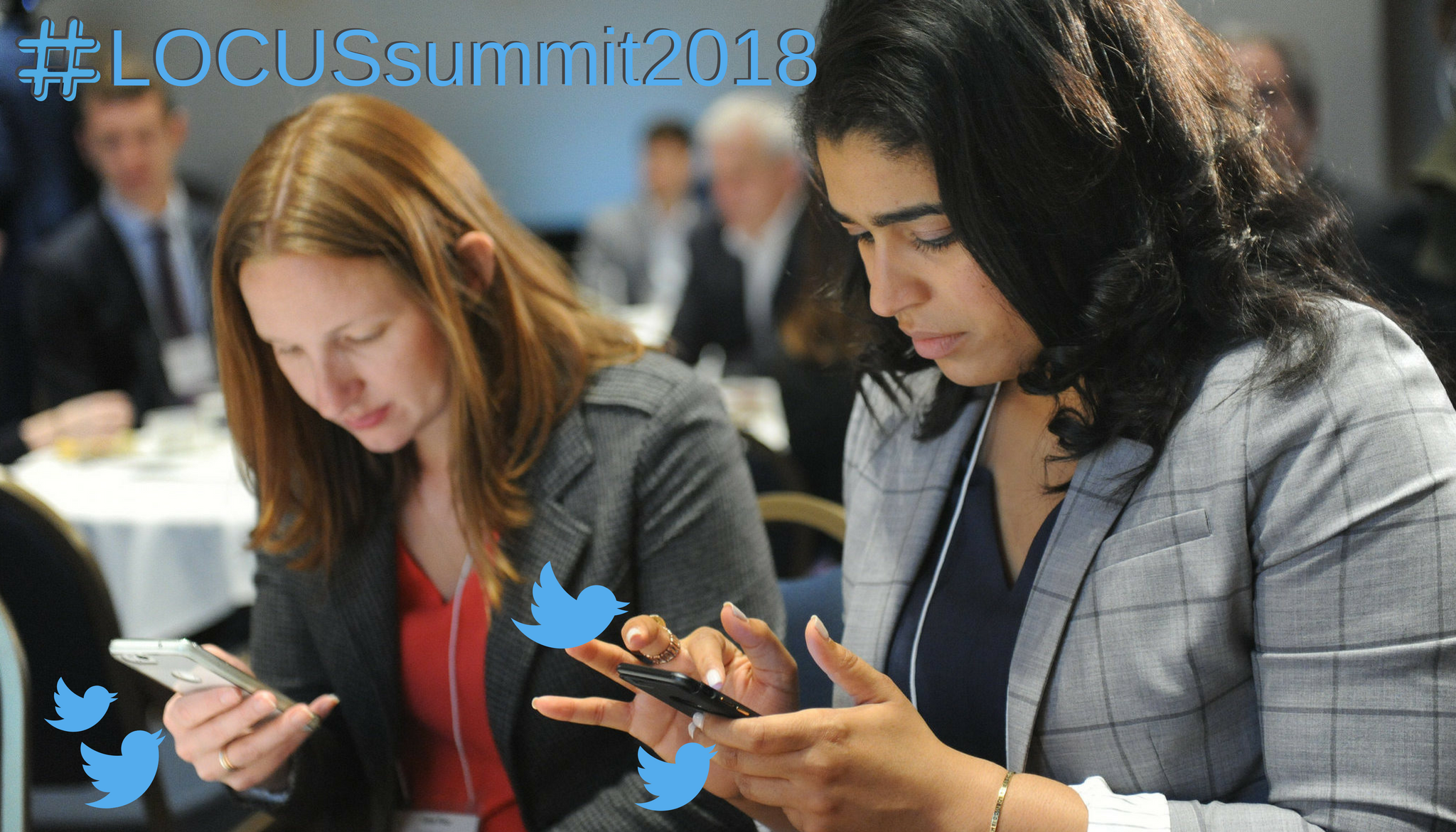 Attendees at the LOCUS Summit tweeting (or checking the conference’s digital agenda on the Whova app).

Last week the LOCUS Leadership Summit: Rebuild America’s Neighborhoods brought forward-thinking real estate developers and investors who are creating sustainable communities together with local elected officials and transportation/land-use planners. The breadth of topics covered at the conference reflected the breadth of expertise among attendees. While the main conference sessions and keynotes were held on Monday (April 23), walking tours, meetings, dinners/receptions, and a lobby day on Capitol Hill with the First & Main coalition of local elected leaders took place in the days before and after the Summit.

Here’s a short look back at what was caught live on Twitter at #LOCUSsummit2018.

Excited to kick off the #LOCUSsummit2018 with a #TOD walking tour of multicultural #SilverSpring pic.twitter.com/uplpgxGwvS

Sitting on DC’s northern border, Silver Spring, MD is an urban community with a diverse and bustling downtown, but it wasn’t always that way.

Once a car-oriented suburb, #SilverSpring, MD has transformed into a walkable, bikable area with transit access. We're touring it today to see how it's embraced change and is preparing for future light rail and bus rapid transit. #LOCUSsummit2018 pic.twitter.com/osjoRCP90B

Awesome tour of #SilverSpring yesterday, a great example of a #community that has increased #development and #density while retaining a true sense of place, diversity and identity #places4people #placemaking #LOCUSsummit2018 https://t.co/oroGl2anST

As we heard on the tour, in the next few years, Silver Spring will find itself at the center of even more transit when the Purple Line light rail and a new enhanced bus route begin service. Read more about the tour here.

Monday: The Summit (and Earth Day)

No better way to honor #EarthDay than learning how to build more #sustainablecities at the #LOCUSsummit2018 pic.twitter.com/Dr1pLKuDqg

I'm excited to be at the LOCUS Leadership Summit, a convening of elected officials, developers, and real estate professionals committed to equitable development. #LOCUSsummit2018 pic.twitter.com/Sdtev9BPlW

LOCUS President Jair Lynch and Oxford, MS Mayor Robyn Tannehill kicked off the Summit with opening remarks followed by a keynote from Majora Carter about (self) gentrification and strategies for sustainable growth and development in “low-status” communities.

"No one else is looking to advocate and effect policy on housing and transportation like @LOCUSDevelopers are." –@JAIRLYNCH #LOCUSsummit2018 pic.twitter.com/BXCR68x8C0

Excited about being in #DC for the #LOCUSsummit2018 ! Looking forward to learning from these @LOCUSDevelopers @SmartGrowthUSA @SGALocalLeaders and Mayors from across the USA. Honored to welcome this group this morning! pic.twitter.com/Kf7J8kyP91

Is poverty really a cultural attribute, something worth preserving in our neighborhoods? "I don't know about your ancestors, but I think my ancestors wanted us to be rich." – @majoracarter #LOCUSsummit2018 pic.twitter.com/I5IoGJNPIb

Let's think about why low-income communities have been taught to measure success as how far we get away from our community.
@majoracarter @LOCUSDevelopers #LOCUSsummit2018

.@majoracarter pushing us to rethink what good investment looks like in low status communities. Provide amenities that draw/retain people rather than things people want to run from. #LOCUSsummit2018 pic.twitter.com/BUyUz9PIx8

If those little Twitter snippets aren’t quite enough, we streamed Carter’s whole speech (and the opening remarks) live and it’s still available for viewing.

If you missed the live stream of the #LOCUSsummit2018 opening remarks and keynote speech from @majoracarter, you can still watch on YouTube: https://t.co/ApgKToelwg (welcome begins at 20:39). pic.twitter.com/SR1VjQGu5t

Sessions during the day touched on everything from revitalization without displacement, to emerging real estate trends, to value capture for transit, to affordable housing.

"You'll never control affordability without controlling the land," and land trusts are one way to do that as @aaronmiripol with @UrbanLandC explains. #LOCUSsummit2018 pic.twitter.com/VpNhqDtW3i

In 2006, real estate taxes in constitution square in DC we're $0.98 million. After infill development with construction of NoMa-Gallaudet U Station, tax income will be more than $20+ million in 2020. #ValueCapture #LOCUSsummit2018 pic.twitter.com/A6IX2B5Esc

"It's not about outsiders coming in and making money, it's about having access to information and tools. People want to have an opportunity to make money in their neighborhoods." .@AscendantGC #LOCUSsummit2018

As developers we need to think of ourselves as economic development engines and utilize our position to create economic equality in African American neighborhoods. – Our Managing Principal, Buwa Binitie speaking at yesterday's #LOCUSsummit2018 pic.twitter.com/Sn4OZapQq8

Back in March, we announced the finalists for the 2018 LOCUS Leadership Awards. At the Summit, the winners were announced:

To honor a developer who has been pioneering #SmartGrowth development in their community, the 2018 Developer of the Year award goes to: @joeltesta with @testacompanies! #LOCUSsummit2018 pic.twitter.com/A5tNjazZrz

And finally, the 2018 Richard Baron Affordable Housing Award, recognizing someone who's worked to make certain everyone can have a great quality home, goes to Shannon Morgan with Shelborne Development #LOCUSsummit2018 pic.twitter.com/ihHCpCKjJW

On Tuesday, members of the First & Main coalition—a growing group of officials from small and mid-sized communities—went to Capitol Hill to bring their “blueprint for prosperity” to Congress and the White House. While not technically part of the LOCUS Leadership Summit, the members of First & Main did attend the Summit Monday, including Mayor Tannehill.

Such an honor to be with these Mayors from across the country yesterday. We can change the world one community at a time. @SmartGrowthUSA @SGALocalLeaders #FirstandMain https://t.co/Lbl2xm5t4p

Proud to be representing the @CityofWheeling in Washington, DC today with First & Main and @SmartGrowthUSA. We need a reliable federal partnership to ensure continued growth at the local level. #FirstandMain

As part of the #FirstandMain Coalition I had the opportunity to meet with @SenCapito, and I am thankful she supports local and federal partnerships that will reinvigorate West Virginia’s economy.

Just finished a great trip to @washingtondc to support @SmartGrowthUSA’s plan for continued federal support of local communities. Flew up and back on @ContourAirlines between @iflymacon and @BWI_Airport. Great way to travel!

Read a full recap about the First & Main lobby day and learn more about this emerging coalition of local elected leaders in this SGA post.

So much was covered during these few short days. But for some visitors, simply being in DC offered its own opportunity to try out a plethora of transportation options not found in their hometown: the metro (subway), circulator buses, dockless bike shares, and electric scooters.

Being in #DC for the #LOCUSsummit2018 is giving me a chance to try out all of the #mobility tech I learned about at #SUMC18 in #Chicago – and it’s been quite a learning experience! Here goes a tweet-storm pic.twitter.com/WB5r9hB3xm

Our sincere thanks goes out to everyone who attended the Summit or came out for the other various events. Here’s to taking what we learned back home and creating more equitable, prosperous, and sustainable communities.