As an introduction to the 2018 LOCUS Leadership Summit (and TOD Peer Network annual convening) last month, we took a trip to Silver Spring, MD which sits just north of Washington, DC. Formerly a car-oriented suburb, the city has more recently developed into a much more walkable, accessible city with an active downtown. In Silver Spring, we met with some of the town’s leaders and transit experts to discuss the upcoming Purple Line, expected to begin operation in 2022.

A brief history of Silver Spring

Silver Spring, MD was once a commuter community centered around a 350,000-square-foot indoor shopping mall. When the Capital Beltway opened in the 1960s and cut through parts of the city, it appeared to cement an auto-oriented future. Even when Red Line Metro service began in 1978, providing easy access to downtown DC, Silver Spring’s city center continued to be dominated by wide, high-speed streets, high property vacancies, and infrastructure that was unwelcoming to pedestrians. You didn’t walk anywhere if you didn’t have to.

In the early 2000s, downtown revitalization efforts began with a focus on outdoor public space and public activities, which slowly brought new life to the neighborhood and attracted diverse food and retail businesses. In 2010, the Silver Spring Civic Building and Veterans Plaza opened and solidified the community-first approach. Since then, the community has only built on their progress by designating a pedestrian-only street, widening sidewalks, and adding transit and bicycle infrastructure. Festivals, a farmers’ market, other public events, and restaurants and retail draw people to the area every day of the year. 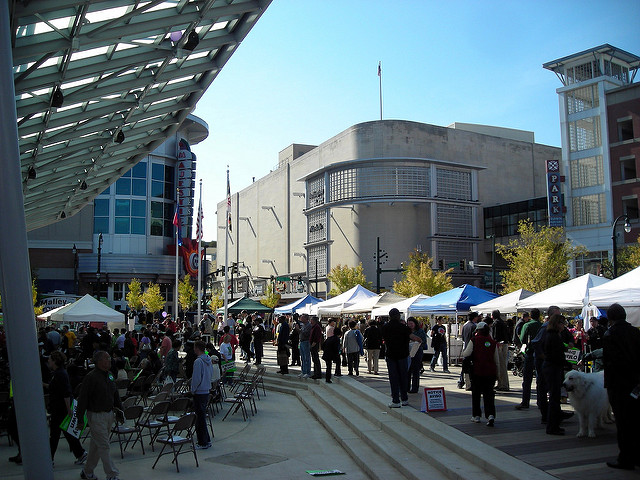 But Silver Spring isn’t done yet. The 16.2-mile Purple Line light rail, currently under construction, will have two stops in downtown Silver Spring, linking it to the western branch of the Red Line and the Green and Orange Lines to the southeast. The Purple line will also connect to all three MARC (Maryland Area Regional Commuter) lines and Amtrak. This new link will provide relief to the high volume of travelers on the corridor that is currently only served by buses. First conceived in 1994, the line is expected to open in 2022. Nearly all of the Purple Line’s route will be built above-ground in dedicated lanes, with a few exceptions.

The Purple line will connect a plethora of bus and rail lines when it opens. (Image: Greater Greater Washington)

The Silver Spring of today and tomorrow

The tour began at the Silver Spring Transit Center, a multi-level facility which is served by multiple routes from four different bus systems, Metro’s Red Line, the MARC regional train system, as well as a taxi stand. The Purple Line will connect on the top floor of the facility with a direct connection from the Red Line platform.

“When the Silver Spring Transit Center was under construction, we had to relocate bus bays around downtown,” explained Montgomery County Councilmember Hans Riemer. “Once the facility opened, we suddenly had all this empty space on the roads that wasn’t used for parking or for traffic. So we decided to try to develop a protected bike lane network for residents who aren’t comfortable on biking higher stress streets.” The first phase of the protected bike lane network opened last year and continues to be developed, along with the Metropolitan Branch Trail and the Capital Crescent Trail, which will provide even more bike connections to Silver Spring. 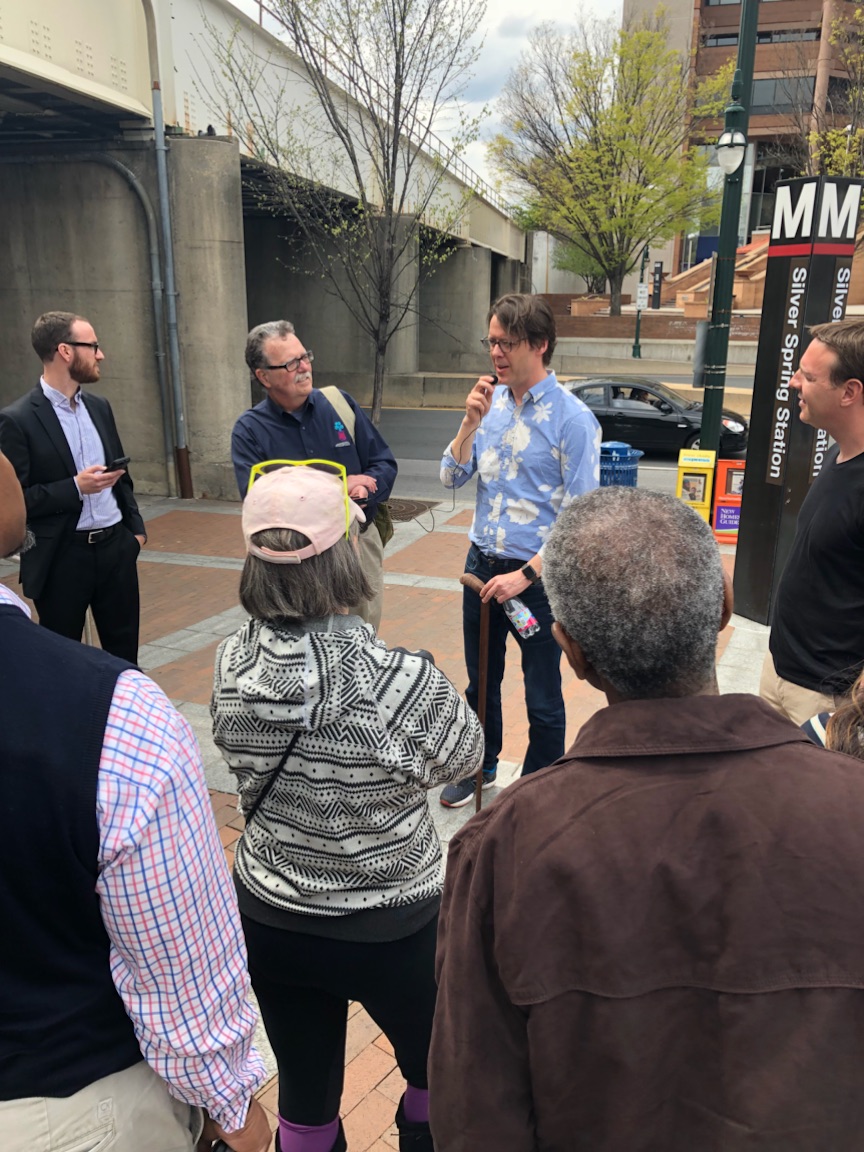 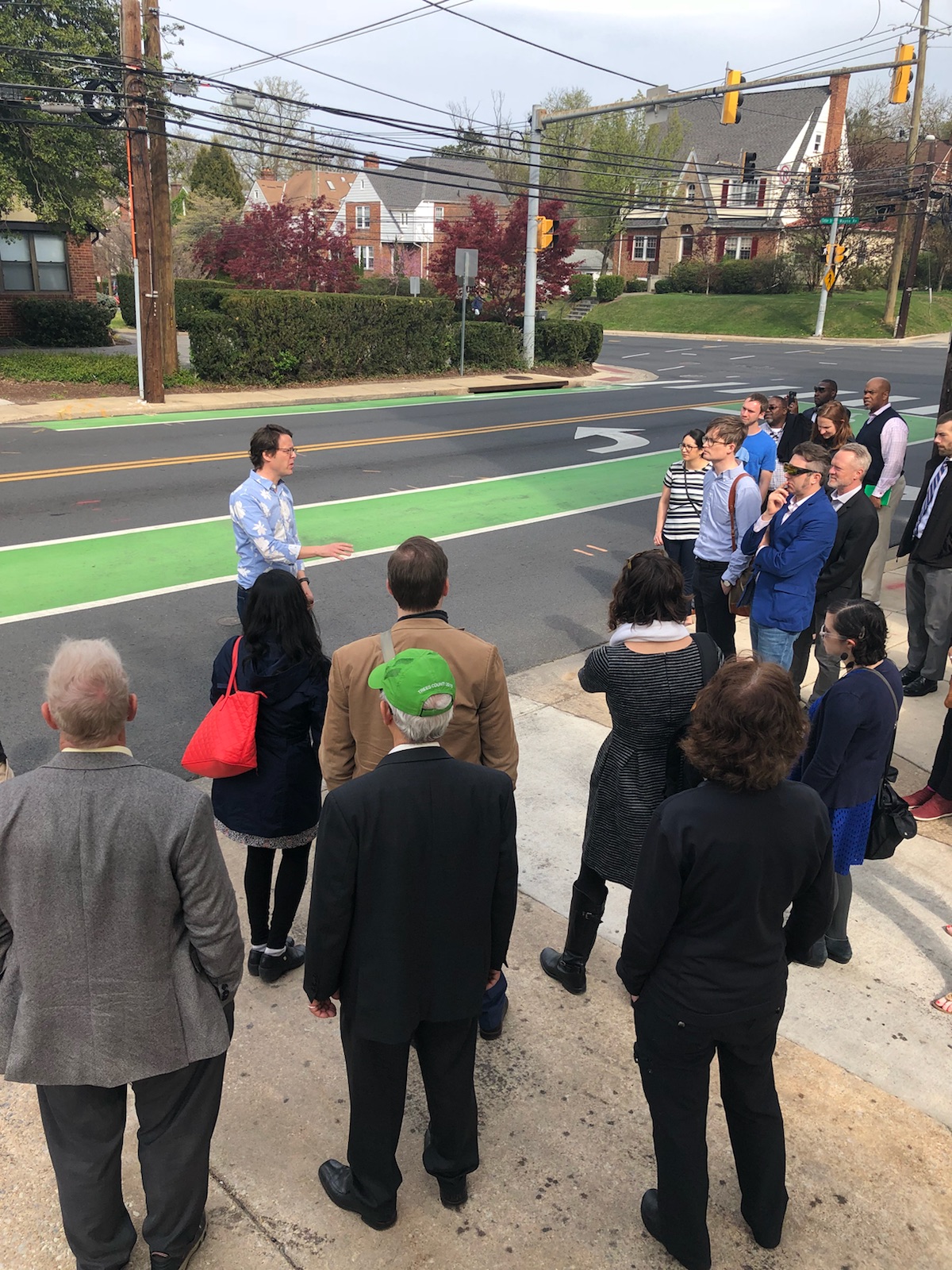 From the transit center, the tour followed the future Purple Line’s route past many small, independent businesses to the Silver Spring Library, which was designed and built to accommodate a Purple Line Station. A 149-unit affordable apartment complex for seniors opened in 2016 in conjunction with the library to encourage residents to age in place. From the library, the tour moved onto the “crown jewel” of downtown, the Silver Spring Civic Center and Veterans Plaza. On this Sunday, the plaza was filled with families and street buskers enjoying one of the first warm afternoons of spring. “Everything is programmed, down to which street buskers are performing and where they are located,” shared Reemberto Rodriguez, Director of the Silver Spring Regional Center and the unofficial “mayor” of Silver Spring. Eric Rasch, Operations Manager at the Silver Spring Civic Building explained, “The Civic Building has events every day of the year, including community group meetings, performances, Bar Mitzvahs, and more.” Veterans Plaza hosts events year-round and every single weekend during the warmer months, like the annual Silver Spring Blues Festival, Silver Spring Jazz Festival, and the Thanksgiving Parade, as well as science fairs and craft markets. From October to April, an ice skating rink brings children and adults alike downtown. Ellsworth Drive, a street adjacent to Veterans Plaza which is closed to cars on weekends, hosts a Saturday farmers’ market, free exercise classes, and outdoor movies.

The original 350,000 square-foot indoor shopping mall that anchored Silver Spring still survives; its most recent iteration includes a Dave & Busters restaurant and arcade, which opened in 2016. But thanks to the community’s focus on transforming its streets with a people-first approach, the mall is no longer the central facet of downtown. No matter the weather, people fill the sidewalks, restaurants, shops, and benches of this revitalized suburb, which continues to grow as new mixed-use development is built every year. 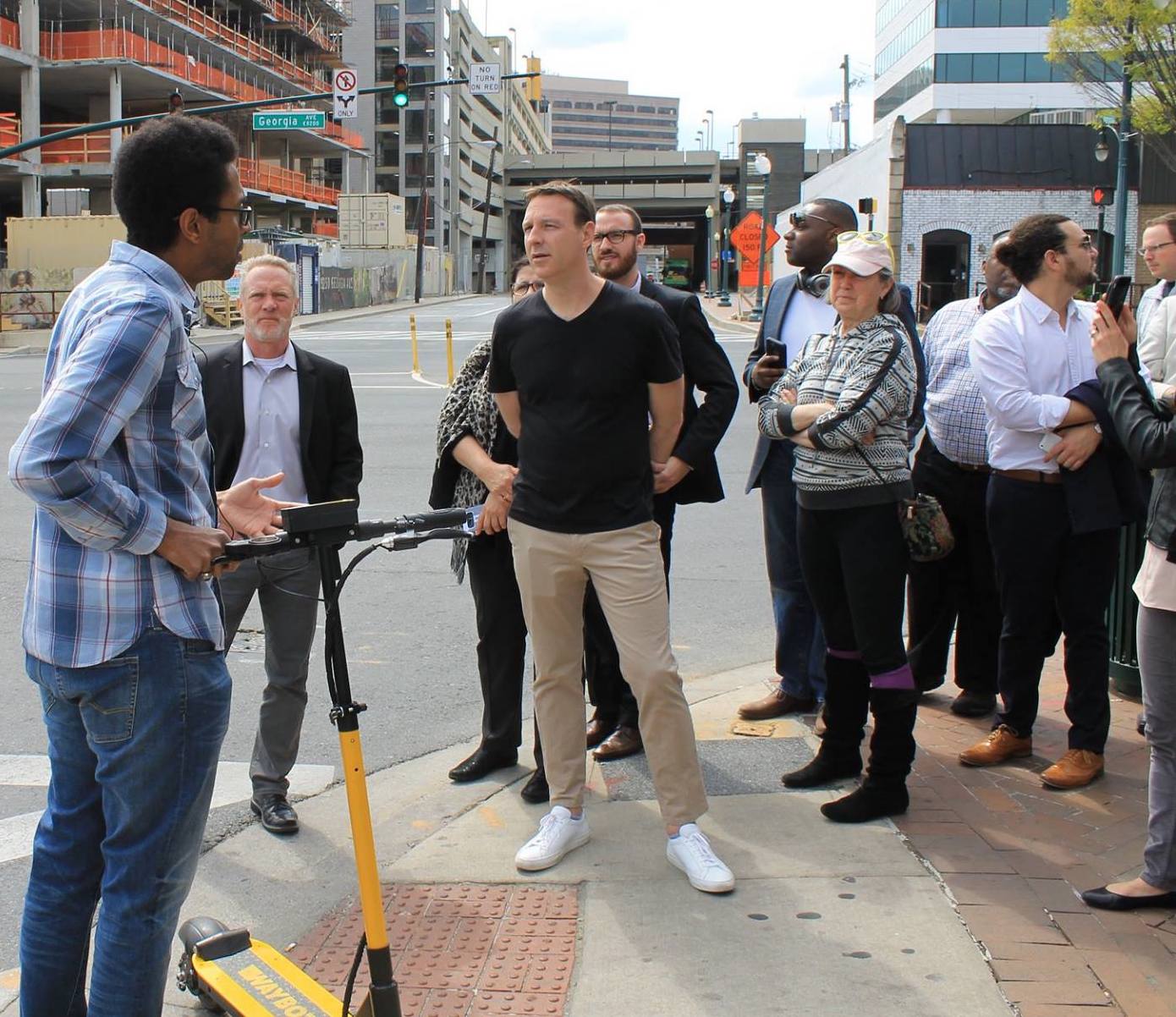 Smart growth without a focus on equity isn’t smart growth at all. Our 2nd Equity Summit on January 11-13, 2022 will once again explore the why, with an expanded focus on how to make racial equity a fundamental part of your work. Early bird registration is open until November 15.