Suburban business parks are dead, and six other things we learned at the LOCUS Leadership Summit 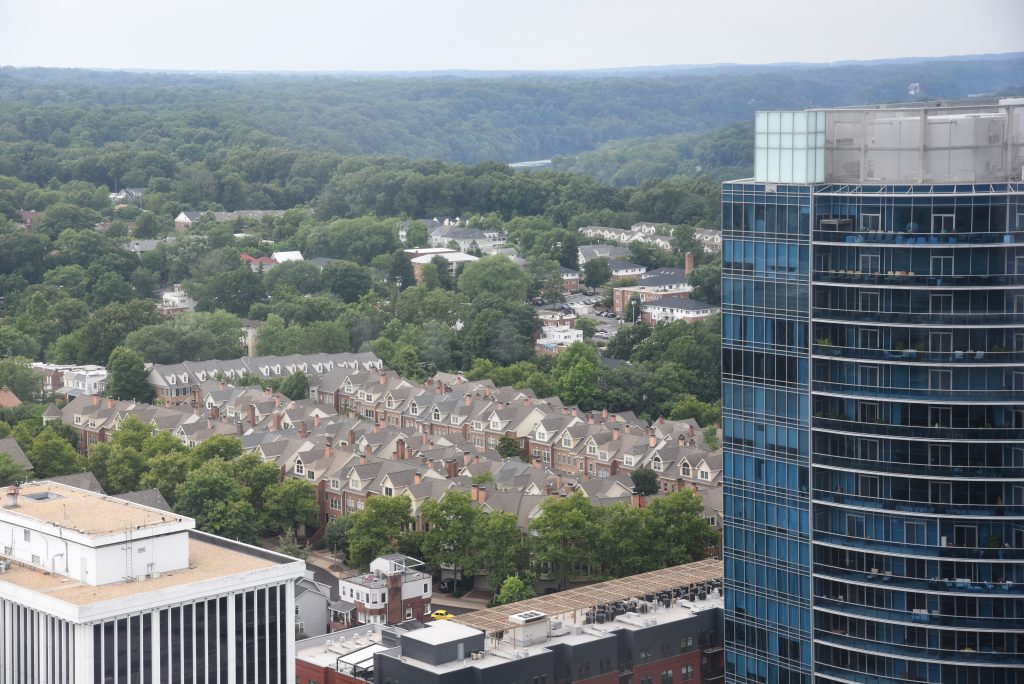 Opportunity Zones are far from a foolproof lifter of all boats

As the theme of the Summit, Opportunity Zones were rightly a huge focus of conversation throughout. This enormous new financial incentive will steer trillions of dollars in private capital into low-income communities around the country. With the federal regulations governing this new program still in development, developers and communities will have to work together to establish trust and ensure that this huge influx of private capital will benefit the residents of these places today rather than displacing them. And to keep the OZ program from being yet another federal driver of sprawl, local communities, in particular, will have to stand up for the kind of financially productive walkable development they want in order to avoid creating more unproductive sprawl that’s a drain on municipal coffers.

This was one of several findings presented during the release of Foot Traffic Ahead 2019, our new report released with George Washington University.  Chris Leinberger, one of the authors and a professor at GWU, explained how office and multifamily housing within walkable urban places (WalkUPs) in the 30 biggest metro areas have had “market share gains of 130 percent in this real estate cycle relative to the 2010 market share base,” as the report says. This means that walkable areas have been taking market share away from their counterparts in the drivable suburbs, which are either adding “no net absorption or even [losing] absolute occupancy since 2010, as shown by the growing vacancies in business parks and regional malls.” As Chris explained, in most big metro areas today, there’s no worse bet in real estate than the traditional isolated suburban office park. It’s the last place that most Fortune 500 companies want to be.

This became apparent early in the day, when the Summit opened with a panel moderated by Jair Lynch and featuring Andy Van Horn from JBG Smith and Mark Schwartz, the County Manager for Arlington—the new home of Amazon’s HQ2. The discussion revealed that Arlington has been priming itself for an Amazon-esque investment for over a decade, investing in and planning for transit, housing, and walkability. This foundation was an attractive selling point for Amazon, indicating that the county was ready to support new jobs and new residents in a manner that was stable, sustainable, and efficient. This point also came across during the afternoon’s Foot Traffic Ahead release, with a spotlight on Denver’s spot at #2 in the rankings of the most real estate in walkable urban places, owing largely to the city’s decades-long investments in transit and encouraging mixed-use, dense zoning.

Cities have to be creative to encourage more attainable housing

There was lots of talk about the connection between transportation and housing and the need to be creative to ensure equitable growth. Some cities are out far ahead of the leadership of their states (or their state’s laws). Several speakers mentioned state laws that ban inclusionary zoning or different tax rates based on unit type. In response, some of the forward-looking cities are being more innovative in how they encourage density and investments in more affordable housing. There were also numerous examples about the merits of planning far ahead—having the foundations of equity in place before those big projects arrive—whether one of the Smart Growth Showcase projects that is partnering with community organizations to preserve affordable housing or Charlotte’s efforts to plan for housing around a new transit line.

The simple yet often unseen truth is that it’s just incredibly easy to finance and build single-family suburbs on a greenfield with five different floor plans available and a street network that looks like a six-year-old drew it. It takes much more effort and thought to build a dynamic, walkable place with a mix of uses in an already developed area that may or may not need environmental remediation. A few speakers mentioned a knowledge gap that we rarely acknowledge: a dearth of experience in the development community—especially outside of the big coastal cities—that makes these projects so much harder and expensive to pull off.

One thing that really impressed me is that in real estate and economic development, relationship-building is an essential ingredient for any project’s success. Emeka Moneme from the Menkiti Group in Washington, DC talked about how meeting members of the community where you’re developing a mixed-use project and then vetting local business owners to give them space in your project “creates authenticity.” Beyond that, by making members of the community actual partners in the project—if their businesses in your space aren’t successful, your project won’t be—aligns different interests to create something useful and authentic for the people in the existing community.

One theme throughout the LOCUS Summit was of developers looking for an easy win by investing in places that are already thriving, like the coastal powerhouse cities. Several speakers and panelists spoke eloquently about educating developers on the benefits of investing elsewhere, such as in second-tier cities or in equity-focused projects that fight against displacement in low-income neighborhoods. Both can help community-minded developers also make consistent money faster. This is what triple-bottom-line development and the LOCUS Leadership Summit are all about: Doing well while doing good.