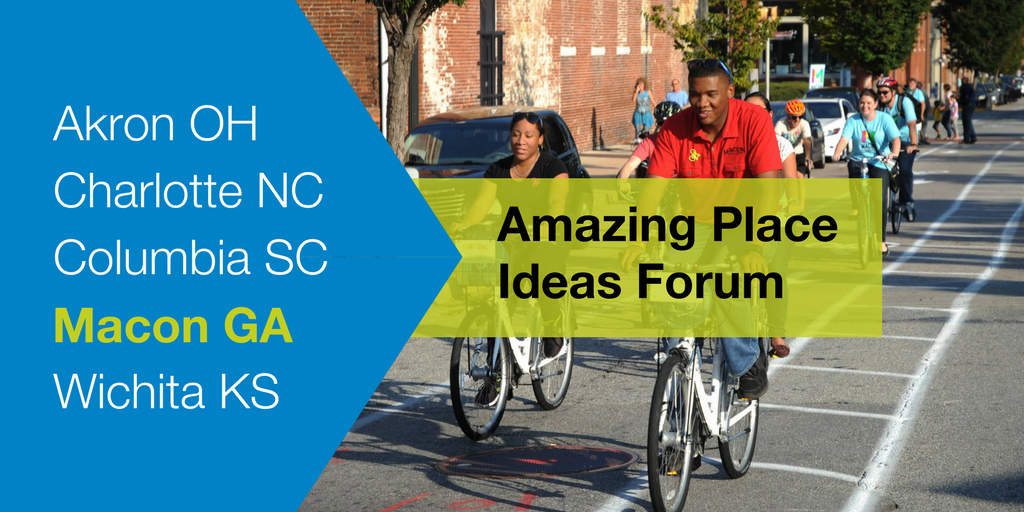 From native American history to the birthplace of great American music, Macon, Georgia, has a rich heritage. City leaders have witnessed the positive returns of a place-based approach to economic development, but those efforts have largely originated outside of government. Macon’s Amazing Place leadership team of mostly elected officials wants to learn more about bringing those same strategies in-house.

Atlanta voters recently passed several ballot measures that will fund Complete Streets projects in the city. What can residents expect to get out of these new projects?

A new video from the Fulton County Partnerships to Improve Community Health (PICH) in collaboration with the Atlanta Regional Commission and the City of Atlanta details what a Complete Streets approach is all about, and the ways it can make streets safer, healthier, and more convenient for people of all ages and abilities, no matter how they travel in Atlanta.

Actually, more than quadruple. It would generate 4.7 times the fiscal impact as development on the edge of town.

Back in April, we released a new model for analyzing the fiscal implications of development patterns. Since then we’ve analyzed development in Madison, WI and West Des Moines, IA.

Now, Macon, GA is the most recent city in which we’ve applied our model.

These results are similar to those from Madison and West Des Moines: building in compact, more walkable ways benefit a city’s bottom line. These strategies reduce the cost of infrastructure and services, while also generating more tax revenue per acre. The only question is, how much would your city gain with a smart growth approach?

Macon-Bibb County, GA has big plans and a grand vision for how they want to revitalize their downtown. A workshop with Smart Growth America will help turn those plans into reality.

Smart Growth America traveled to Macon-Bibb on April 15 and 16, 2015 to conduct a workshop on Implementing Smart Growth 101. The workshop will help local leaders translate the plans for downtown revitalization into actionable next steps.

The City of Franklin, TN is one of 14 communities that will receive a free technical assistance workshop from Smart Growth America in 2015.

Smart Growth America is pleased to announce the 14 communities selected to receive free workshops in 2015 as part of our free technical assistance program.

The National Complete Streets Coalition reports on the national epidemic of pedestrian fatalities, offering county-, metro-, and state-level data on traffic fatalities and an interactive map of each loss in the decade 2003 through 2012. This resource specific profiles the state of Georgia.

Walkable urban development is now the primary real estate market in one of the nation’s most unlikely regions: metropolitan Atlanta, GA.