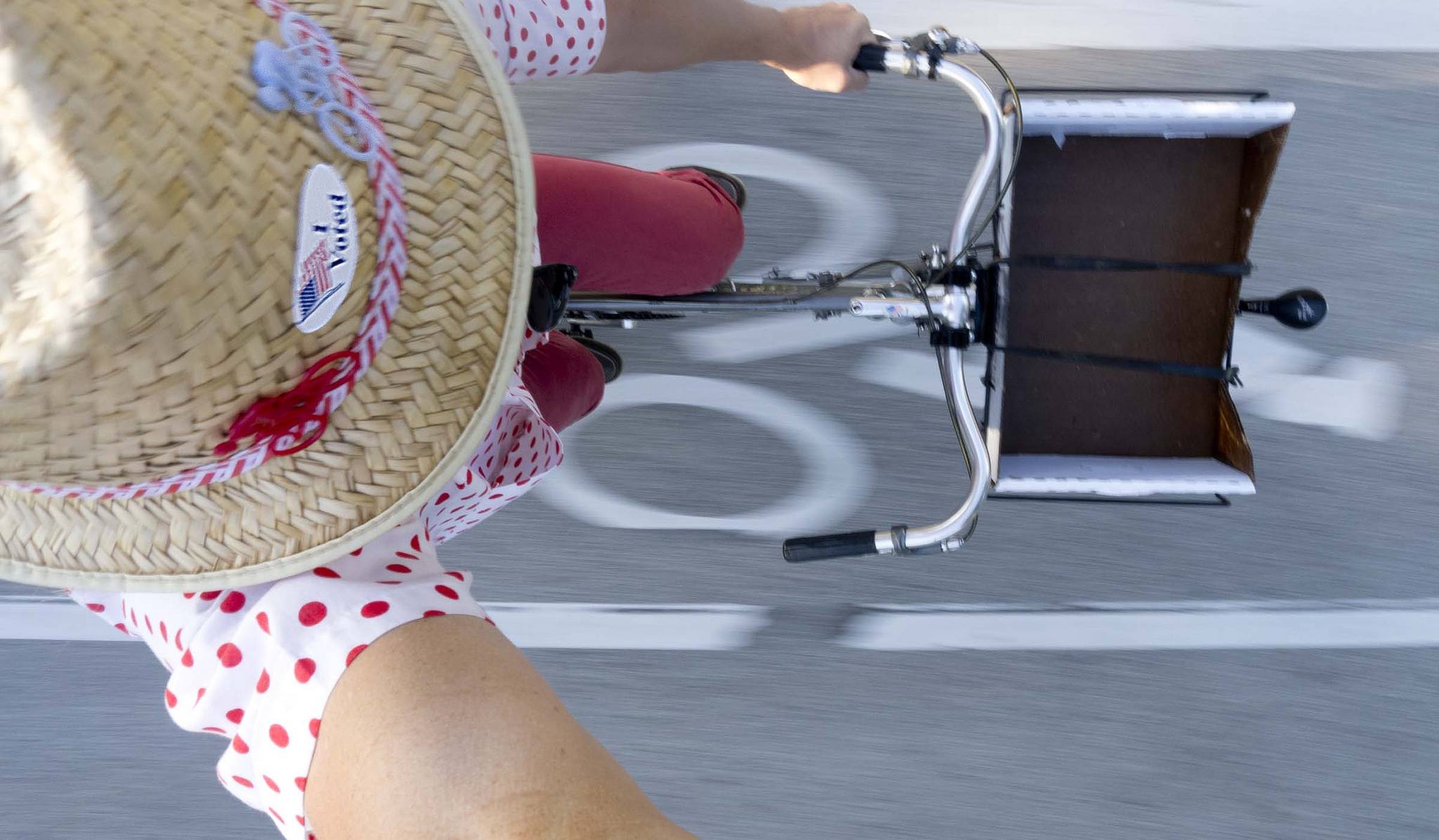 An ocean apart from the US mainland’s electric supply, Hawaii has embarked on an ambitious effort to wean itself off imported fossil fuels with a mandate to reach 100 percent renewable electricity by 2045. Elemental Excelerator commissioned Rhodium Group, in partnership with Smart Growth America, to conduct an independent analysis of Hawaii’s clean energy transition. This is not a plan; rather, this report presents a quantitative assessment of accomplishments to date and describes the future potential of clean energy deployment in Hawaii’s electric power sector and on-road transportation. 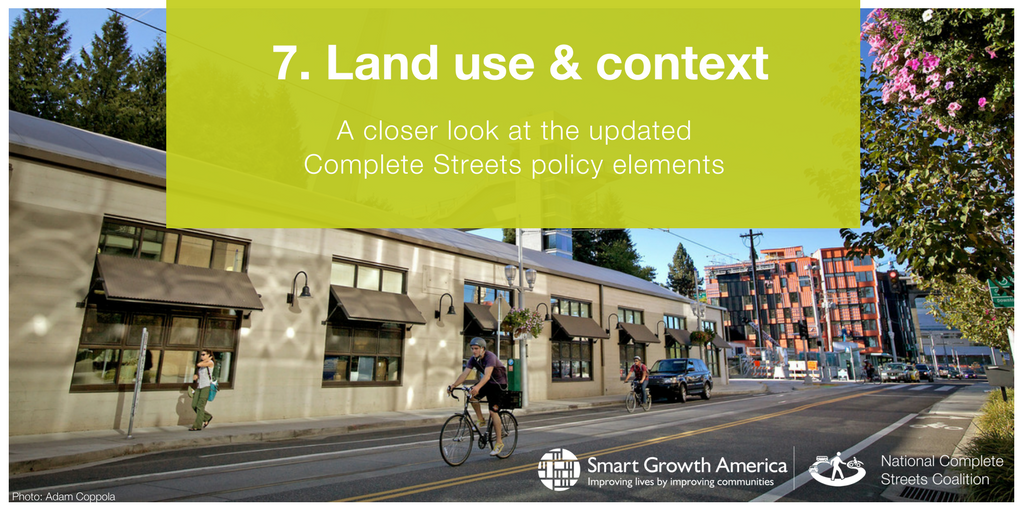 We’ve raised the bar for this element of our Complete Streets policy framework to better account for land use and context. In our previous framework, we gave points to policies that simply mention community context in decision making. Now, the updated framework requires Complete Streets policies to integrate land use policies, plans, zoning ordinances, or equivalent documents from jurisdictions at all levels of government.

The way communities plan neighborhoods has profound effects on the natural environment and public health. A new study released by the Environmental Protection Agency’s (EPA) Office of Sustainable Communities’ Smart Growth Program finds a link between environmental quality and land use and transportation strategies.

The second edition of Our Built and Natural Environments: A Technical Review of the Interactions Among Land Use, Transportation, and Environmental Quality, an update to a 2001 report of the same title, details how development can impact human and environmental health. “As the U.S. population has grown, we have developed land that serves important ecological functions at a significant cost to the environment,” the report states, going on to say, “Changing where and how we build our communities can help mitigate these impacts, improving how development affects the environment and human health.”

As solutions to these mounting problems, the report demonstrates the benefits of specific development strategies. The report recommends preserving ecologically valuable sites and placing a stronger emphasis on infill develop and transit oriented development. Each of these strategies reduce the number of vehicle miles traveled and, in turn, greenhouse gas emissions. The report also emphasizes the need for community design that addresses development’s potential downsides, offering investing in mixed-use development and improving street connectivity as solutions.

Pima County, Arizona, has made a concerted effort in recent years to improve how it uses land and maintains its infrastructure.

The County already is already working to improve the area’s zoning codes, and the Sonoran Desert Conservation Plan, which works to balance development with preserving open space, has been touted as “one of the best and most comprehensive habitat conservation plans in the country.”

Huffington Post – January 5, 2012
While millions of foreclosed homes languish on the market at lower and lower prices, new data supports the idea that renting out these foreclosed homes could be the long-sought solution to the housing crisis. Rental units are leasing quickly, and the vacancy rate for apartments is at its lowest level in a decade, according to data released Thursday. In many areas, rents are rising.

Lawmakers began 2011 with sweeping ambitions to shrink the U.S. government’s involvement in mortgage finance. They ended the year enacting policies that increase it. An 11th-hour extension of the payroll tax cut, signed into law on Dec. 23, will for the first time divert funds from Fannie Mae (FNMA) and Freddie Mac (FMCC), the two mortgage finance companies under U.S. conservatorship, to pay for general government expenses. Congress also took steps that are likely to increase the role of the Federal Housing Administration in the market—at the same time that the agency’s reserves hit a record low. And some economists are charging that the FHA’s finances are even worse than they appear.

For a place that’s on the forefront of a heavily-subsidized brand of taxpayer-funded suburban sprawl, Celina is steeped in the kind of conservative politics that generally eschews government subsidies.

Schumer suggested that Thursday that lawmakers should use a package of pending tax breaks to extend a provision from the 2009 economic stimulus package that allowed public transit users to set aside $230 per month before taxes for commuting expenses. Because Congress has not yet extended the provision, which expired on Jan. 1, the limit was reduced to $125 at the beginning of the new year.

Report: Housing shift seen as suburban spreads lose appeal
The Sacramento Bee, December 13, 2011
Is Sacramento’s long-standing love of suburban living winding down? A blunt new analysis says yes, but some local builders say no way. The report released this week by the Urban Land Institute contends that Sacramento and other California metropolitan areas are about to discover they have an “oversupply” of classic subdivision housing, thanks to a sea change in what buyers want and can afford.

Is the Housing Bust About to Slam City Budgets?
Wall Street Journal, December 8, 2011
City budget crises could be getting worse in the coming years as the housing bust shakes out by shrinking property tax revenues, according to a report from the Federal Reserve Bank of Cleveland.

Lawmaker’s high-speed rail plan: Will it fly?
CNN, December 13, 2011
How fast can high-speed trains come to the Northeast corridor? Not fast enough for Republican Rep. John Mica of Florida. The chairman of the House Transportation Committee recently came out with a proposal to create a high-speed rail line – trains that can travel more than 200 mph – between Boston and D.C. in 10 to 15 years. Can it be done in half the time Amtrak said it would take?

Do you know of an innovative project, plan or initiative that deserves to be honored for bringing smart growth ideals to light in New Jersey? Smart Growth America’s coalition member New Jersey Future is looking for nominees for their 2012 Smart Growth Award.

Congress strikes 2012 budget deal for some agencies
Federal Times, November 15, 2011
House and Senate negotiators have struck a deal on the 2012 budgets for five Cabinet-level departments, as well as NASA and a number of smaller agencies. The measure also would extend short-term funding for other agencies until Dec. 16 at close to last year’s levels. An existing continuing resolution expires Friday, meaning the new measure must pass before then to avert a partial government shutdown. Besides NASA, the $128 billion bill covers the Agriculture, Commerce, Justice, Transportation and Housing and Urban Development departments.

A Kentucky City Reinvents a Faded Downtown
New York Times, November 15, 2011
Like so many other American cities after World War II, Owensboro’s pattern of residential and business development spread out from the downtown core….Of late, though, this city of 57,265 and surrounding Daviess County, where 96,656 people live, have invested in an array of business development initiatives in health care, transportation, education, and tourism and travel that focused on making the city and county more competitive in attracting residents and businesses.

New Urbanism: Comparing Songdo, South Korea to Belmar, United States of America
Forbes, November 15, 2011
I grew up in a small town of 6,000 in northeastern Pennsylvania—a county seat surrounded by dairy farms. We walked to the elementary school, the neighborhood store for a loaf of bread and maybe a soda, and weekly shopping trips downtown–3 blocks from home.

Streetcar, rail get go-ahead
Cincinnati.com, November 9, 2011
Cincinnati voters narrowly gave a green light Tuesday to the long-debated streetcar project, clearing the way for construction of the Downtown-to-Over-the-Rhine line to begin by early next year.