Traffic enforcement cannot do the job of better roadway design

After reading a report like this, some reporters, residents, and local leaders may be tempted to reach for increased traffic enforcement and financial penalties as an obvious solution. But relying on enforcement and financial penalties to solve issues that stem from street design cannot solve the epidemic of traffic fatalities. And even a simple traffic ticket can trap working families in a vicious cycle of poverty and punishment if they can’t afford to pay the stiff fines and fees that jurisdictions often impose. 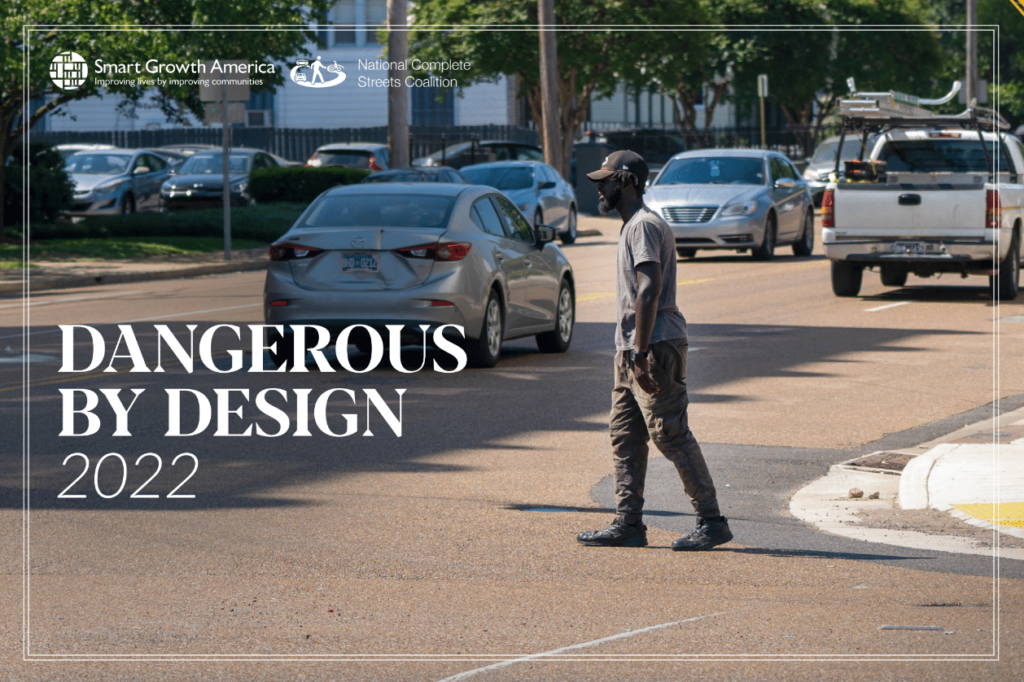 This guest post is a supplement to the 2022 edition of Dangerous by Design, our landmark report on the alarming increase in people being struck and killed while walking, and how the way we design our streets is part of the problem. More than 6,500 people were struck and killed while walking in 2020, a 4.7 percent increase over 2019, even as driving decreased overall because of the pandemic’s unprecedented disruptions to travel behavior.

Design, on the other hand, is an upstream solution. When streets are designed with safety in mind, people intuitively drive more slowly, making them able to notice and process important signals from their environment, preventing dangerous behavior before it occurs, and focusing efforts on safer systems rather than individual behavior.

When streets are designed primarily to move as many cars as possible as fast as possible, and people are not provided the infrastructure they need to walk and bike safely, enforcement often punishes travelers for behaving logically. It is no mistake that one of the most common forms of speed limit enforcement is called a “speed trap.” When a road looks and feels like a highway and is designed for 45mph or more but has a speed limit of 35 mph or less, many drivers are not aware they are making a mistake—until it’s too late. The result of that is frequently issued citations, but not a change to overall driving behaviors.

And for state and municipal governments, using fines and fees as the primary mode of enforcement often leads to over-reliance on ticket revenue to fund basic government services, which can distort law enforcement priorities and erode trust between communities and police.

Leaning so heavily on enforcement to manage individual behavior—while neglecting the more powerful systemic tool of designing streets that produce safer, slower driving overall—can increase the likelihood of abuse and exacerbate the existing disparities and inequities that people living in Black and Brown and low-income neighborhoods already face, all without reducing crashes.

According to the Bureau of Justice Statistics, traffic stops and car crashes account for at least 66 percent of contact between police and the public in the last decade, making dangerous streets the most frequent place for incidents of police brutality, particularly for low-income and minority residents. In addition to often being overpoliced and being more likely to face police violence, Dangerous by Design shows how communities of color also disproportionately bear more of the burden of poor street design. This combination of factors creates a uniquely dangerous situation in these communities which requires systemic changes.

And this problem is not unique to driving, as enforcement has also become a major component of so-called “pedestrian safety” initiatives, which also tend to place a greater emphasis on communities of color. Between 2012 and 2017, Black pedestrians in Jacksonville, Florida constituted 55 percent of all ticketed pedestrians despite making up only 29 percent of the population.

Though several factors are likely at play, infrastructure is a key aspect. Pedestrian infrastructure tends to be least available in Black and Brown communities, while car ownership is less common. And in low-income communities, the financial penalties of traffic enforcement create economic hardships and financial burdens that can include life-altering consequences: late fees, license suspension, loss of employment, and a vicious debt cycle.

Automated enforcement (like speed cameras) is another way to enforce behavior, but without transparency and clear guardrails about how it’s deployed, it can be subject to the same biases as human enforcement, further perpetuating inequities, and deepening government reliance on fines and fees for revenue. After all, decisions about where to place enforcement equipment, how much a fine is for each ticket, and what fees to add on, are still being made by state or local officials.

For example, after a recent initiative to install traffic cameras in Chicago, Black and Brown zip codes were ticketed at roughly twice the rate of white neighborhoods, leading to significant financial hardship and even bankruptcy. And when Chicago changed its speed camera program in early 2021 to issue citations at 6 mph over the speed limit, the city generated $89 million in fines in one year—raising the daily tickets issued from 1100 to 9,000. Meanwhile, the number of pedestrian fatalities in Chicago increased in 2021.

As a biker and pedestrian myself who lives with young children in a major city, I think about street safety every time I step outside my home. I understand the temptation to deal with growing traffic violence with expanded enforcement efforts. But enforcement alone will fail to solve the fundamental problem: streets designed for the very behavior that enforcement is trying to eliminate. The best strategy for more effective and equitable enforcement is to reduce how much it’s needed, by redesigning streets that make safer behavior easier, more intuitive, and ultimately more likely.

Our thanks to Priya Sarathy Jones and the Fines and Fees Justice Center for their help and support with Dangerous by Design 2022.