The hearing before the House Select Committee on Global Warming and Energy Independence just wrapped up on Capitol Hill a few minutes ago. SGA’s David Goldberg, along with Steve Winkelman of the Center for Clean Air Policy, did a superb job in their testimony before the committee. They made a good case for how better planning, investing in transit, walkability and reducing vehicle miles traveled can help cut emissions and fuel consumption. We’ll summarize and post some quotes and audio a little bit later in the day.

But the most fascinating stories told were from two opposite sides of the globe, and were borne out of extremely different circumstances.

Dr. Sultan Al Jaber, CEO of the Masdar Initiative in the United Arab Emirates city of Abu Dhabi, testified about the Masdar Inititiave — where a city will be built from the ground up to be the first zero-carbon community in the world. (Worldchanging has coverage of course). It’s an enormous project, with some of the brightest, most innovative minds in the world on sustainable architecture and design working together to build things that haven’t yet been invented. It’s slated to be car free, with the use of extensive public transport and personal public transport — as well as walking — to help residents get around.

Plain and simple, it’s the most groundbreaking project of its kind, and while employing many existing green techniques, it will be utilizing all sorts of whizbangery that has until now only existed on paper. Dr. Al Jaber talked at length before the committee about how the oil industry of the tiny nation is not only in favor of the idea, they’re supporting it extensively.

The other story is a much smaller tale. Greensburg, Kansas, a town of 1500, was literally wiped off the map by a severe tornado last year. The small town, struggling to keep population before the disaster, faced its likely death knell. It seemed hopeless that anyone would stay in light of such huge devastation.

But stay they did.

The city’s leaders took the opportunity to start from a clean state, and recreate Greensburg as a town of opportunity, by making it the first green city in American built from the ground up. City Administrator Steve Hewitt testified this morning, and he was certainly the darling of the committee members, who were asking him a steady stream of questions about what they were doing in Greensburg. (For some great background on what Greensburg is doing, check out Worldchanging.) 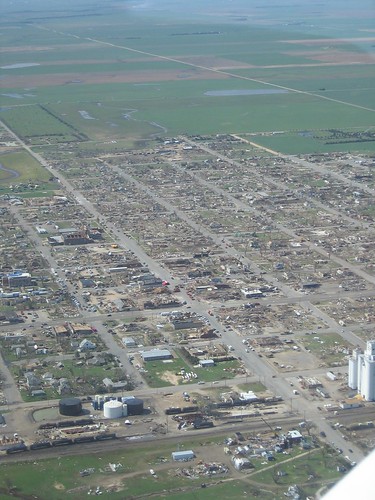 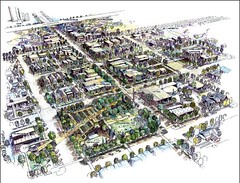 For all their plans about wind powering the entire city (with a surplus left over!), making every single buidling in the city LEED Platinum certified, and striving for carbon neutrality, the most impressive part of their plan has nothing to do with the kinds of techno-wizardry of Masdar. Rather, it’s the simple concepts of planning that our historic communities — including Greensburg — were built on.

They went back to their roots as a walkable small town (it’s only a mile across), laid down a complete street grid, and have plans to recast Greensburg into a mixed-use, walking town where car trips are massively reduced, energy consumption and emissions are low, and opportunity is great.

NRDC’s Kaid Benfield blogged about the details of their community redevelopment plan a few weeks ago. (A plan that the town generated itself):

New downtown. Greensburg’s new downtown will be mixed-use, architecturally diverse, and built for walkers, with welcoming sidewalks and street furniture, traffic calming, on-street parking instead of surface parking lots, and attractive native plantings and permeable pavers to facilitate stormwater control. The plan encourages two- and three-story buildings to create a sense of place at the right scale for the size of the town, and accommodates the historic small-town model of providing housing above ground-floor shops.

Walkability. The plan observes that “the desire to create a walkable community was clear from Greensburg’s residents. It helps create the small town feel that was cherished for generations in Greensburg.” The town’s relatively small size (roughly one mile across) is conducive to walking and, in addition to the downtown amenities mentioned above, and sidewalks throughout the town, the plan encourages a transect-based approach to maintain a walkable scale with higher residential densities closer to the core.

Transportation. There is no way a town like Greensburg is going to have urban-style public transportation. But being thoughtful about walkability, density, and the location of business and civic functions helps. It is impressive that the plan addresses the issue.

Our congratulations go out to Greensburg, which according to the city administrator, is bearing more of an up-front cost burden because the federal agencies helping with aid won’t cover all the costs of investing in sustainability and ensuring LEED Platinum status — a problem that Chairman Markey pledged in this morning’s hearing to try and address.