“We have a wonderful downtown, but it is still underutilized”

As we travel the country, there are few things better than witnessing an elected official have an “a-ha” moment and realize that the conventional wisdom they’ve been handed down about growth and development perhaps wasn’t actually the best wisdom after all.

Ruston is a city of about 22,000 in northern Louisiana hugging the Interstate 20 corridor that runs east/west across the state and connects to Texas and Mississippi. Though Ruston has a long list of assets and has been doing relatively well, it’s much like thousands of similar places around the country that have spent the last few decades overlooking the potential of their downtowns and existing areas in favor of sprawling new development and/or annexation. It’s an understandable decision—all the incentives are typically geared to make that type of development easier, but it often doesn’t produce enough revenue to cover costs over the long term, leading to (a short-sighted) urge to annex new land to increase the tax base and improve the economic outlook.

Smart Growth America has been partnering with the U.S. Department of Agriculture to provide rural residents and leaders with better information about the financial and economic impacts of their development choices and patterns. A team of SGA staff were in Ruston last week for a workshop (Planning for Economic and Fiscal Health) in which we use data to help make the case to residents and elected leaders that not only is smarter growth better for overall quality of life, but it’s the best way to ensure the long-term economic prosperity of their cities.

“As a city, you’re going to be making infrastructure investments and land use decisions, and as any place does, you have limited resources,” Smart Growth America senior policy advisor John Robert Smith—also a former small-town mayor himself—told me upon his return from Ruston. “The choices you make about land use and investment will carry either a price or a return to your local community for decades to come.”

Over the last decade or two, most of the growth in Ruston has happened near I-20 or on the north side of it—much of which has come by annexing new land. And as you might expect, most of that growth has taken the form of pretty conventional post-1950s land use patterns: separated uses, large parking lots, wide roads, not much connectivity or facilities that make it possible for walking, and so forth. The growth near I-20 is designed as much to be seen from the interstate as to be utilized by local residents, and as a result, many people in the region and beyond mostly know Ruston as a good place to stop for food or gas on the interstate between Jackson, MS and Shreveport, LA—while never seeing the downtown that gives the place its soul.

The city has already started to see some of the benefits of trying to encourage new development downtown, and while downtown is doing pretty well, it’s also definitely still “underutilized” in the words of Mayor Ronny Walker.  Our team prepared some data to help city leaders and residents start to understand that much of the city’s most valuable real estate is actually located there in the city’s downtown. 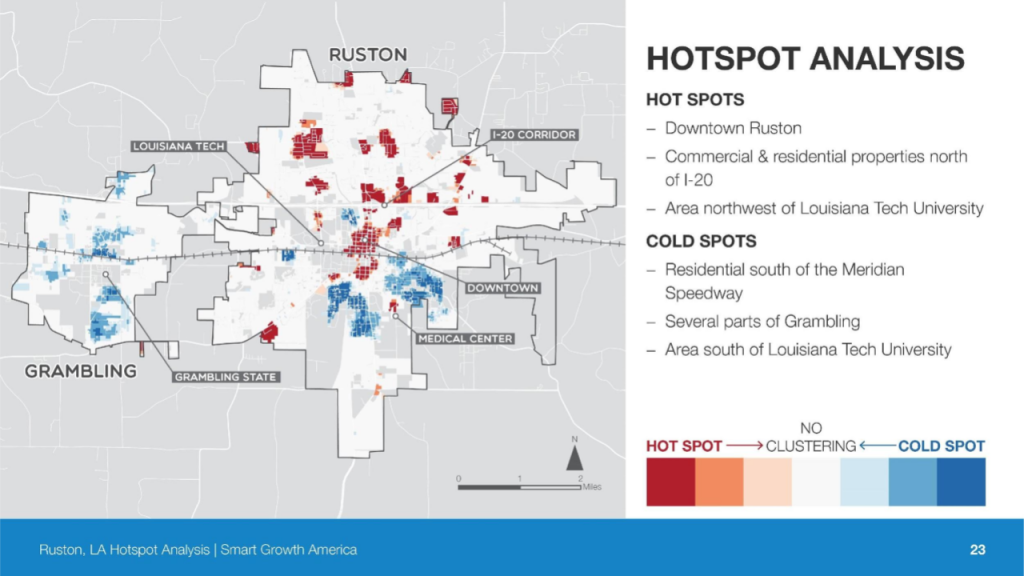 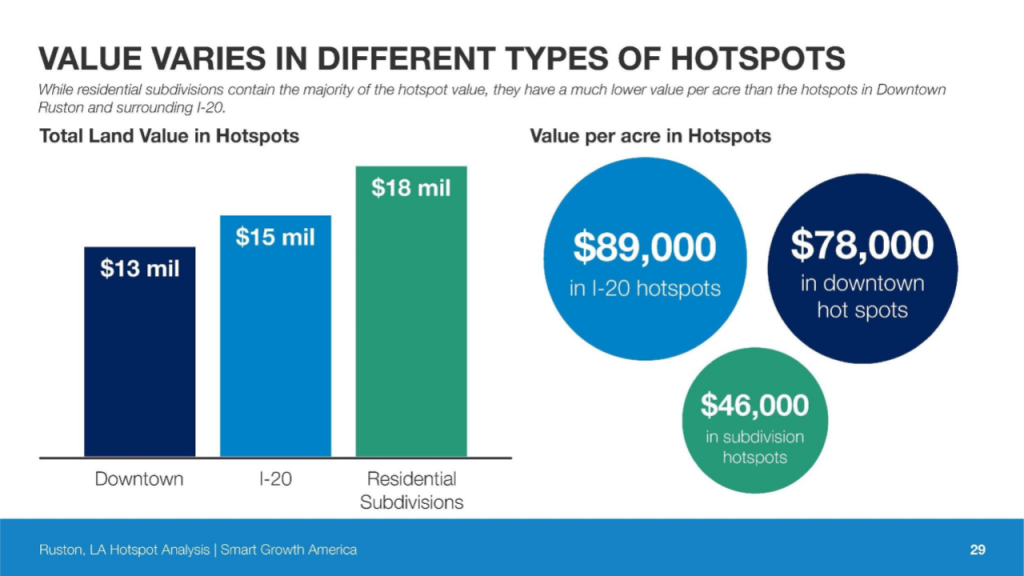 “There are definitely some hotspots out there on or near the interstate. And more investments are going to come out there but it was important to show the residents that the value per acre downtown was nearly twice that of the residential neighborhoods north of the interstate,” Smith said. “The downtown—even in its current underutilized state—is carrying a large share of the cost to provide services to those new residential areas.”

We also tried to communicate that infrastructure and service costs are additional factors to consider, though not included in this preliminary data analysis. Sprawling residential subdivisions require more costs per acre in the way of seats in local school systems, water and sewer infrastructure, and police/fire/emergency services. 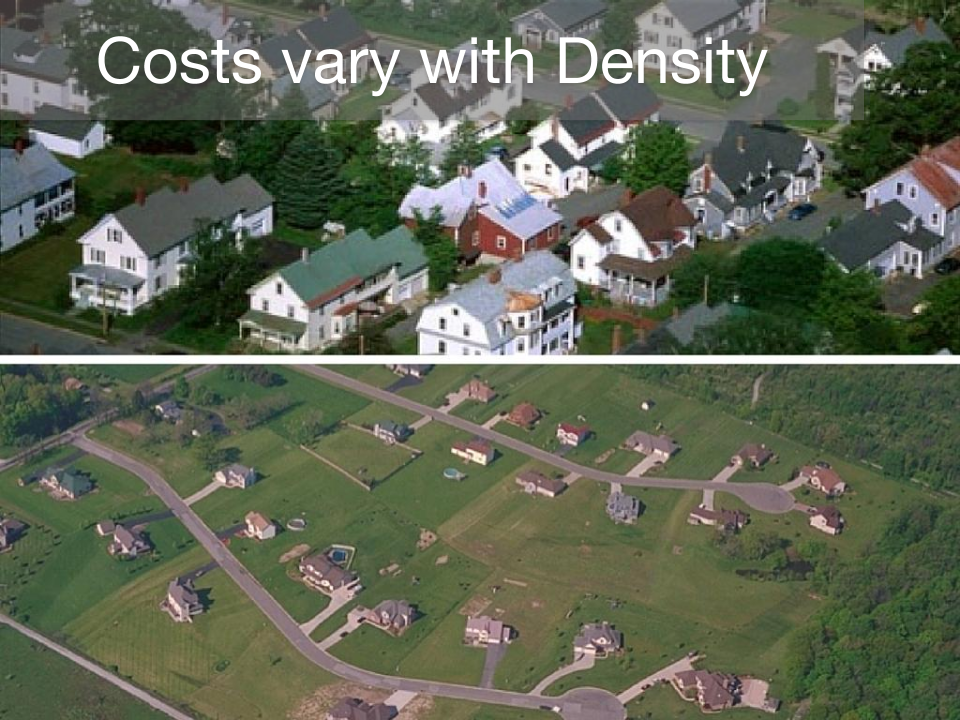 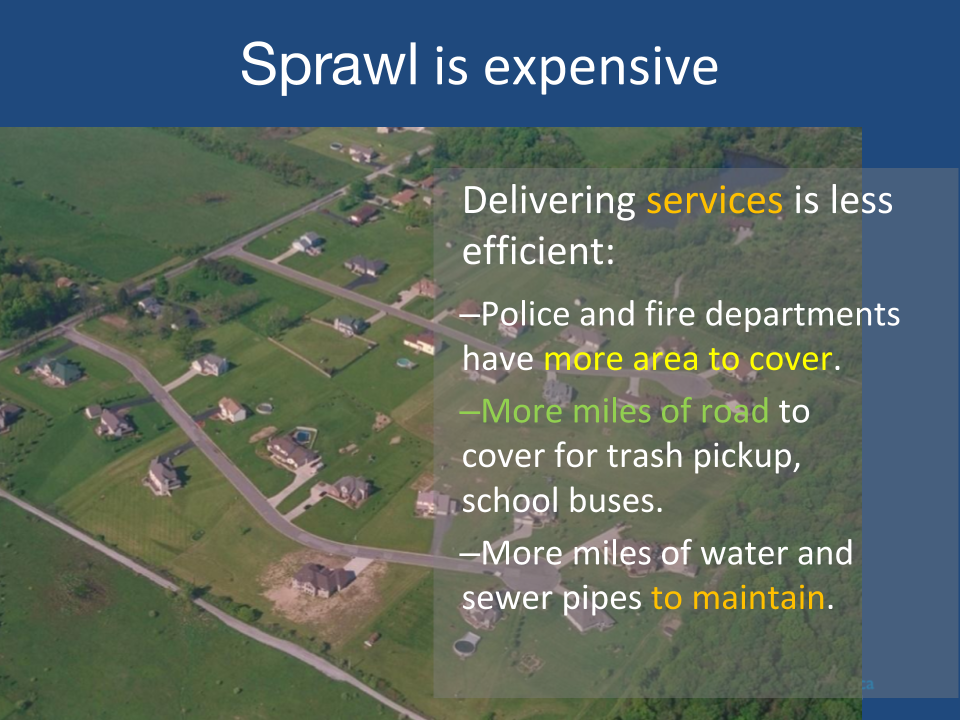 One tremendous asset that Ruston has compared to similarly sized cities is Louisiana Tech University, a growing school that’s home to more than 12,000 students. (Grambling State, a 5,000-student historically black college, is also located nearby, within the same parish just west of the city.) The university is still a bit of a sleeping giant for the city.

“Louisiana Tech was long known as a ‘suitcase’ college where few students stayed on campus 24/7. Both the city and the university’s leadership want to help make Ruston a proper college town and provide more opportunities for graduates to stay after graduation—but they can’t do that without working together,” Smith said. Fortunately for Ruston (and for LaTech), the city and the university know that their fates are bound up together.

“The leadership of the university is really strong and they’re focused on having a good relationship with the city to coordinate and collaborate. Having these two leaders together [Mayor Ronny Walker and University President Les Guice] brings the possibility of great things happening for the city,” he said.

By his own admission, current Mayor Ronny Walker came into office believing deeply in the conventional wisdom that opening up new land to development or annexation was the most viable long-term economic development strategy. Before our presentation was even over, Mayor Walker had changed his focus almost completely: 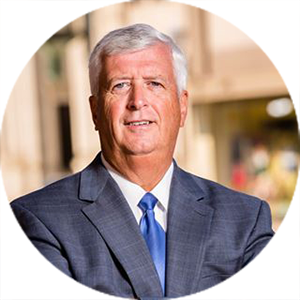 “I heard it long before taking office in 2015—’if Ruston’s population is going to grow, we need to grow our footprint.’ Prior to the Smart Growth America Economic and Fiscal Health Workshop, I was sure this was correct and annexation was our best option. Since participating in the workshop, I have done a 180 on my thoughts on annexation.  Ruston can still grow in population, but we can do a better job of utilizing the footprint and infrastructure we already have in place.  For example, we have a wonderful downtown, but it is still underutilized. We need to put our energy and focus on how to better utilize our existing assets to their full potential.”

As part of the workshop, our staff also spent time interviewing a range of stakeholders and residents in the city to get a bead on peoples’ attitudes about downtown development, the city’s assets, and what needs to change or be done better. And we heard loud and clear that “downtown” and “Louisiana Tech” are the heart and soul of the city.

The City of Ruston has a real story to tell and it hasn’t been fully told in the past. We’re excited to continue working with Ruston (and other places like it) and equip them with tangible policy recommendations they can use to capitalize on their greatest assets to build upon a place where residents can stay and find opportunity, where college graduates want to stay and build a life, alumni want to retire, and where everyone can live in a place that’s healthy, resilient and prosperous.

Ruston is taking the long view to envision a better future, and although “a city is not built in a day,” as Mayor Smith is fond of telling all of us here, a brighter future is not out of reach.

See the Next Steps Memo prepared for Ruston and the one month progress report.