What does post-Katrina New Orleans say about cities? About America? (NOLA resilience part 1)

You are looking at a photo of Congo Square, in the Tremé neighborhood of New Orleans, adjacent to and just northwest of the French Quarter.  Slaves once gathered here on Sunday afternoons to dance and make music, and some say it is the birthplace of jazz.  I’m certainly not going to romanticize slavery, but one has to admire the resilience of those forced to endure it, claiming a day and a place for themselves and their culture.  More recently, Congo Square was the site of the annual New Orleans Jazz and Heritage Festival, until Jazzfest outgrew the space and moved to the fairgrounds.

I’m headed to New Orleans today to take part in the annual convention of the American Institute of Architects.  As a non-architect, I take a certain pride in being invited into their circle.  I’m looking forward to being on a panel with my friends David Dixon and Laurie Volk. 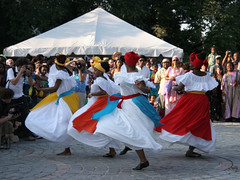 And I’m also looking forward to returning to New Orleans, for what I think will be the third time since Katrina.

In honor of this trip, I’m going to be running three posts about the city, which – speaking of resilience – is proving to be a remarkably resilient, if also remarkably challenged, community.  In today’s post, I’m going to look at New Orleans through the lens of the fabulous HBO dramatic series Tremé, about the neighborhood and the post-Katrina lives of the musicians who live there.  The show is infused with tons of authenticity – sometimes disturbing and sometimes uplifting – and incredible music.

I’ve spent a great deal of time in New Orleans over, gosh, four decades now, in many parts of the city.  When various charities sprang up in 2005 as a result of the hurricane and flooding, the one that I gave to was a fund organized by legendary NOLA radio station WWOZ (well represented on the show) to help displaced musicians survive.  I may care about music even more than I care about the environment, or at least it is closer to my soul.  And that’s saying a lot. 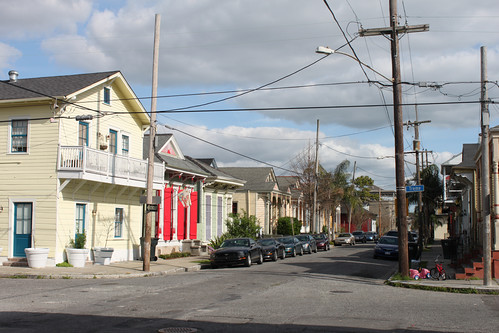 So this series has become one of my all-time favorites.  It was co-created by David Simon, who also created The Wire, which was to crime and police work in Baltimore what Tremé is to music and post-Katrina survival in New Orleans.  Reading a number of interviews with Simon, I’ve been struck by how he makes the connection between Tremé and larger issues about urban community and the importance of culture to community in America.  The remainder of this post will largely be devoted to Simon’s words, extracted from a series of articles that I encourage you to read in full.

For example, here are a couple of quotes from an interview conducted by Andrew Anthony and published last year in the British newspaper The Observer:

“This is a story about culture and how American urban culture defines how we live. 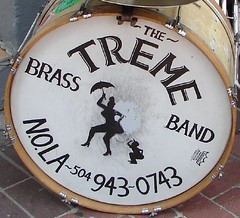 New Orleans is an extraordinary and unusual culture, but it comes from the same primal forces in American society of immigration and assimilation and non-assimilation and racism and post-racialism that really are the defining characteristics of this melting pot society. [Note: see Lee Epstein’s excellent essay, posted here Monday, for more on this very concept.]

“What is it about Americans that makes us Americans? The one thing we have unarguably given the world is African-American music . . . The combination of African rhythms and the pentatonic scale and European instrumentation and arrangement. That collision of the two happened in a 12-square block area of a city called New Orleans that had a near-death experience in 2005.”

You may read the interview in full here.

Simon expanded on those themes in a later interview with Vince Beiser of The Progressive, published in March of this year: 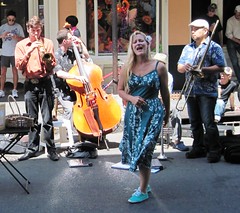 “This show, if we do it right, is an argument for the city. For the idea of American urbanity, for the melting pot, for the idea that our future can’t be separated from the fact that we are all going to be increasingly compacted into urban areas, though we’re different in race and culture and religion. And what we make of that will determine the American future.

“I listened during the last election cycle to the rhetoric about small town values and where the real Americans live . . . That idea was lost with the Industrial Revolution. And yet with more than 80 percent of Americans living in metropolitan areas, there are still demagogues who want to run down the idea of multiculturalism, of urbanity, being the only future we have. We either live or die based on how we live in cities, and our society is either going to be great or not based on how we perform as creatures of the city.”

Some of my friends who prefer rural and small-town living may find a bit of discomfort with that, but he has a point.  We’ve got to get cities, suburbs and metro regions right. 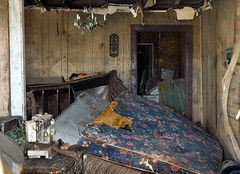 Simon really hits his stride when relating the importance of culture to community, and of both to self-identification:

“What brought this city back has been culture: an unyielding unwillingness to part with the living tradition that is life in New Orleans. One crawfish etouffe, one saxophone solo at a time, the city is coming back. Before the storm, 77 percent of the people who lived here were born here. In the transient state that is modern America, that’s a remarkable statistic . . . 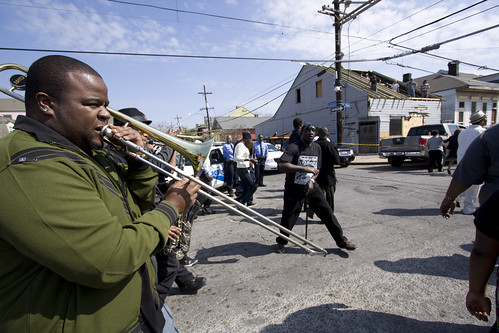 “[The pride in belonging to New Orleans that the show’s characters express is] a form of patriotism. That is the patriot­ism that was once reserved for the nation-state. Where immigrant families would compete against other immigrant families over who had been here the longest and who was the most invested. That was when the identification with the American ideal and the American collective seemed not only utterly desirable but essential . . .

“It was a time before gated communities. It was a time before charter schools. It was a time before capital had won a complete victory over labor. Before globalization. When you believed your tomorrow might be better than your today . . . When that held, patriotism couldn’t be made to seem naive. In the wake of Katrina, what you’re witnessing and what we are very careful to depict is a form of patriot­ism. An insistence on belonging in this nation-state—New Orleans.” 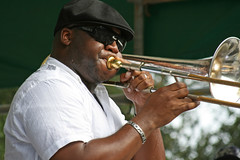 Finally, speaking with Alex Rawls of OffBeat, a publication dedicated to Louisiana music and culture, Simon sums it up, making a strong argument for the importance of place:

“Where you live and how you live somehow matters, which is becoming increasingly rare in America as we become more and more generic.”

Tremé underscores its emphasis on place with the appearance of many New Orleans-based musicians, including the likes of Allen Toussaint, John Boutte, Kermit Ruffins, the Rebirth Brass Band, Irma Thomas, The Subdudes, Cyril Neville, Ron Carter, The Radiators, the Dirty Dozen and Hot 8 Brass Bands, and many more.  Elvis Costello had a memorable cameo last season.  Hallowed venues like the Maple Leaf, Snug Harbor and Tipitina’s get some air time, too.  My personal favorite music on the show is the spellbinding jazz violin of Lucia Micarelli, who also plays one of the show’s main characters, and whose work appears often.