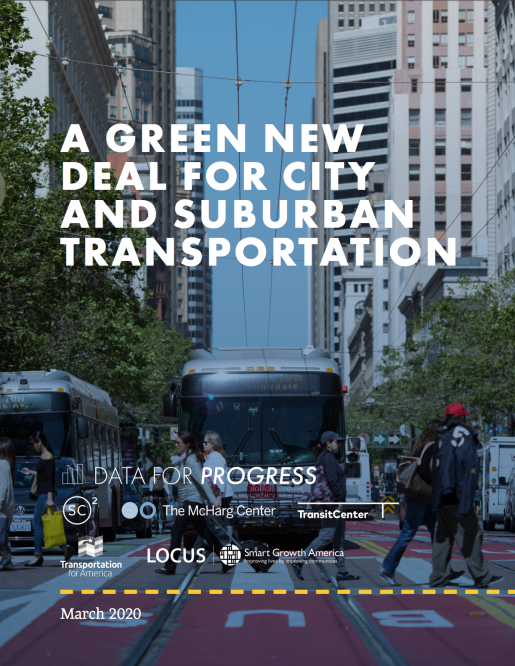 voters support many of the policies to expand transit and provide more transportation options included in this report, as these new polling results show.

A Green New Deal for City and Suburban Transportation

In February 2019, Representative Alexandria Ocasio-Cortez (NY-14) and Senator Ed Markey introduced the Green New Deal to Congress, momentous legislation that, if passed, would set goals for future climate lawmaking. But the bill had one glaring omission: it was “devoid of the bold reimagining of federal transportation spending which encourages more roads, more driving, more sprawl, and more emissions,” as T4America director Beth Osborne wrote at the time.

Until now. A Green New Deal for City and Suburban Transportation lays out federal policy recommendations for reducing emissions from the transportation sector in cities and suburbs while making communities healthier, more equitable, and prosperous.

Americans want to see many of these recommendations put into action. New polling shows that the report’s recommendations, such as the expansion of public transit and prioritizing roadway maintenance over expansion, enjoy broad, and in many cases, bipartisan support, with Americans supporting expanding public transit by a 77-15 margin.