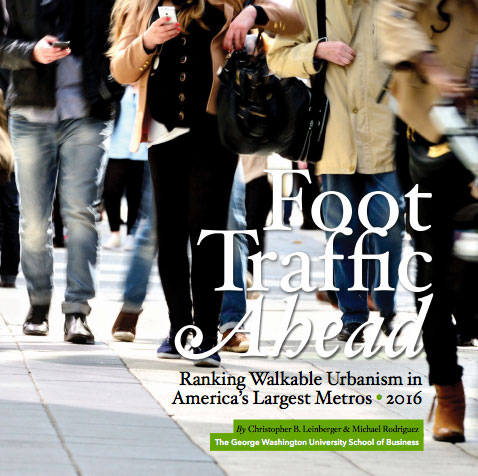 The 30 metros are ranked on the current percentage of occupied walkable urban office, retail, and multi-family rental square feet in their WalkUPs, compared to the balance of occupied square footage in the metro area. The six metros with the most walkable urban space in WalkUPs are, in rank order, New York City, Washington, DC, Boston, Chicago, San Francisco, and Seattle.

Indicators of potential future WalkUP performance show that many of the metros ranked highest for current walkable urbanism are also found at the top of our Development Momentum Ranking—namely, the metros of New York City, Boston, Seattle, and Washington, DC. This indicates that these metros will continue to build on their already high WalkUP market shares and rent premiums.

There are also some surprising metros in this top tier of Development Momentum rankings, including Detroit, Phoenix, and Los Angeles. The most walkable urban metro areas have a substantially greater educated workforce, as measured by college graduates over 25 years of age, and substantially higher GDP per capita. These relationships are correlations, and determining the causal relationships requires further research to prove.

Social equity performance
The national concern about social equity has been exacerbated by the very rent premiums highlighted above, referred to as gentrification. Counter-intuitively, measurement of moderate-income household (80 percent of AMI) spending on housing and transportation, as well as access to employment, shows that the most walkable urban metros are also the most socially equitable. The reason for this is that low cost transportation costs and better access to employment offset the higher costs of housing. This finding underscores for the need for continued, and aggressive, development of attainable housing solutions.