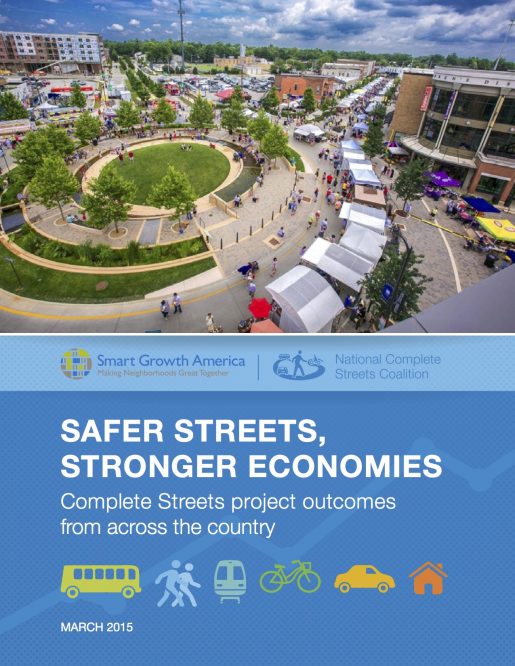 What do communities get for their investments in Complete Streets? In this study of 37 projects, Smart Growth America found that Complete Streets projects tended to improve safety for everyone, increased biking and walking, and showed a mix of increases and decreases in automobile traffic, depending in part on the project goal. Compared to conventional transportation projects, these projects were remarkably affordable, and were an inexpensive way to achieve transportation goals. In terms of economic returns, the limited data available suggests Complete Streets projects were related to broader economic gains like increased employment and higher property values.

Safer Streets, Stronger Economies analyzes that data and explores the outcomes communities get for their investments in Complete Streets. In this tight budget climate, transportation staff and elected leaders want to get the most out of every dollar. This research shows Complete Streets projects can help them do just that.

The data showed that streets were usually safer after Complete Streets improvements than before. In the majority of cases collision rates declined after Complete Streets projects were built, and there were fewer injuries as well. These safety improvements have real financial value: Our analysis found that the safer conditions created by Complete Streets projects avoided a total of $18.1 million in collision and injury costs in one year alone. These savings start as soon as a project is complete, and continue long after. And this was just the amount saved by the projects included in our sample. The financial impact of automobile collisions and injuries nationwide is in the billions of dollars annually. Targeting the country’s more dangerous roads and taken to any meaningful scale, a Complete Streets approach over time has the potential to avert hundreds of millions or billions of dollars in personal costs.

The data also showed that Complete Streets projects were remarkably affordable. The projects surveyed include a wide range of costs, from projects with limited scopes that cost just a few thousand dollars to extensive corridor redesigns that cost several million. For the most part, however, Complete Streets projects cost significantly less than conventional transportation projects, yet can still deliver transportation benefits like better safety performance and more people using the facility.

Communities interested in these kinds of benefits can get started on their own Complete Streets approach, and this report also includes ideas for policy changes, transportation design standards, project evaluation guidelines, and ways to measure project performance to help in that effort.

More than 700 towns, cities, counties, regions, and states have made official commitments to these practices by passing Complete Streets policies, with more being passed every year. Whether it’s planting trees or adding crosswalks, making travel lanes narrower or creating space for people on bikes, hundreds of communities are changing how their streets look and work—and this study suggests they’re getting a great return on their public investments in the process.