To get America moving, we need safer streets 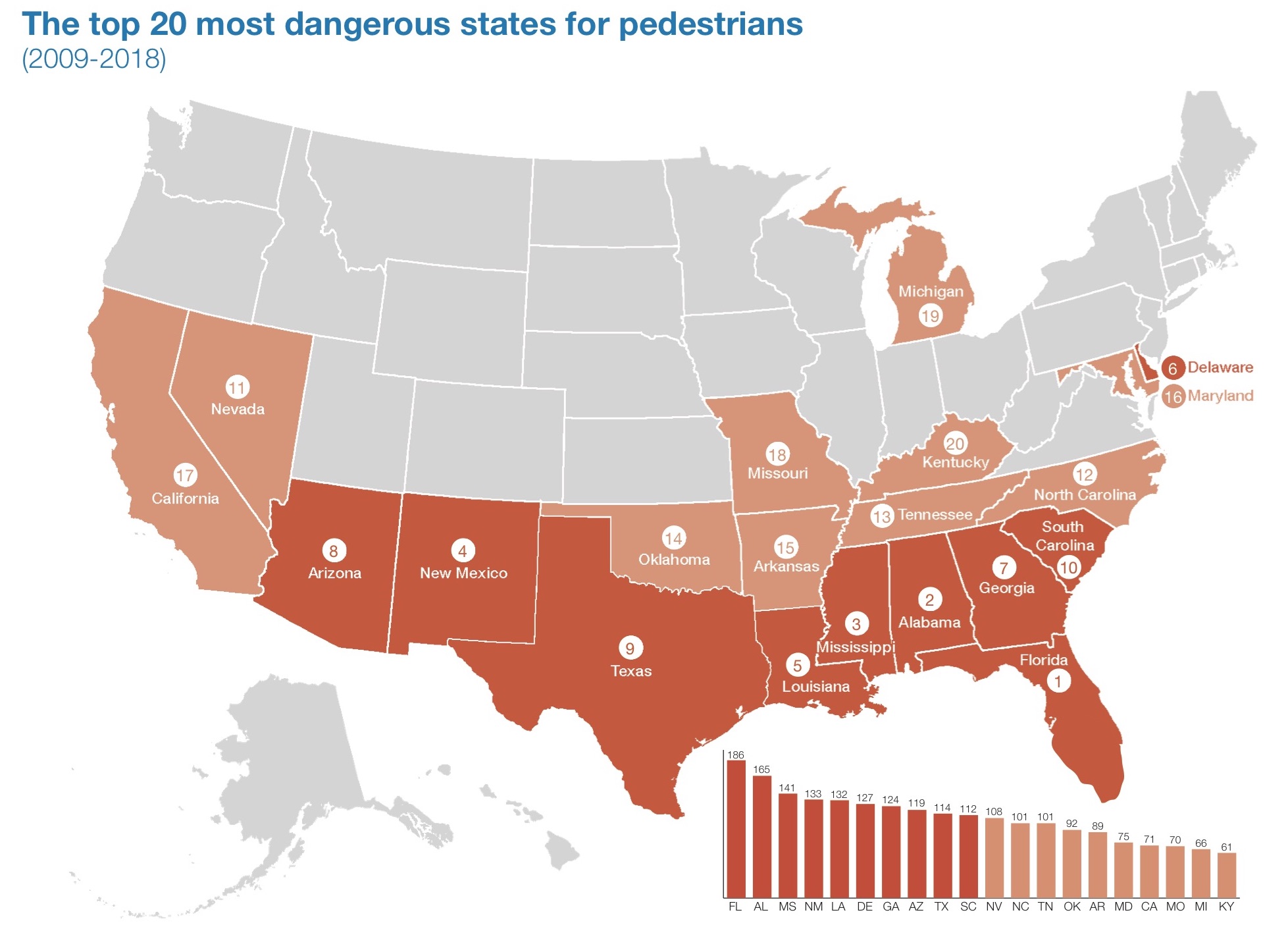 Today, the Centers for Disease Control and Prevention (CDC) unveiled their Active People, Healthy NationSM initiative on Capitol Hill focused on improving America’s health through physical activity. But access to safe and reliable active transportation options is critically important to achieving their goals, and many of our roads remain unsafe and inaccessible to people outside of a vehicle. A new off-year update to Dangerous by Design—also released today—shows that the number of people struck and killed or seriously injured while walking, biking, or rolling continues to increase, and that most states are asleep at the wheel.

“The choices we make are 100 percent dependent on the choices we have in front of us. We want to increase physical activity by investing in Complete Streets and sidewalks.”

That was the message from U.S. Surgeon General Adams during a Capitol Hill briefing highlighting the CDC’s initiative to increase physical activity in America. Getting more Americans walking, running, biking, rolling, or otherwise being active can save us millions in healthcare costs and improve quality of life. Through the Active People, Healthy Nation initiative, the CDC pays particular attention to the need to integrate this activity into everyday life—like a bike ride to work or walking to the corner store instead of adding a new exercise routine—as one key strategy to get 27 million Americans become more active by 2027. At a time when most indicators of public health are getting worse, there is no doubt that increasing physical activity should be a major national goal. Those who can safely replace a car trip with a walking or biking trip will reap the benefits for their health.

But roads that are dangerous by design remain a huge obstacle to realizing this strategy—the active choice is often unsafe because our streets aren’t designed to safely accommodate people walking, biking, or rolling. While data for 2019 won’t be available until later this year, 2018 was the most dangerous year on record for people walking and biking since 1990—continuing a decade-long increase. Drivers in the U.S. struck and killed 6,283 people walking and 857 people while riding bicycles in 2018; tens of thousands of people walking, biking, and rolling were also seriously injured by cars crashes. These data show just how important local, state, and especially federal action is to redesign roads to prioritize the safety of the most vulnerable people using them.

Unfortunately there hasn’t been nearly enough action yet. In Dangerous by Design 2020, an interim update to our latest full report on pedestrian fatalities, we show that most states continue to see increases in deaths and serious injuries among people walking, biking, and rolling. Using the latest data from 2009-2018, we find that while there is some minor shuffling among the top 10 most dangerous states and the top 20, the rankings by and large remain the same. (Florida and Alabama retain their place as the first and second most dangerous states, respectively.) But what’s really unique about this 2020 update is the inclusion of serious injuries among all non-motorized transportation in addition to fatalities, and the comparison of this carnage to the safety goals states set for themselves.

As we noted in Dangerous by Design 2019, 18 states established “safety” targets for non-motorized deaths and injuries in 2018 that exceeded the number of people killed or injured in recent years. It is indeed astonishing that states could set goals for deaths/injuries that are higher than previous years with no penalties, accountability, or loss of federal dollars, but this is how the federal program is currently designed.

Thankfully, not all 18 states surpassed their unambitious targets—drivers in eight of the 18 states managed to strike and kill or maim fewer people than the state anticipated. 31 states (plus DC) did aspire to improve safety for people walking, biking, and rolling, but only eight of those 31 states managed to achieve those goals. (The District of Columbia also failed their goals to improve safety.)

In all, 33 states and DC failed their “safety” targets—more people walking, rolling, scooting, and biking were killed or seriously injured by drivers on their roads than the goals they set. More people being struck and killed by drivers speaks to the need for more urgent and ambitious efforts to preserve life on public roads—and a renewed focus at all levels of government on safety instead of speed as the guiding measure of success.

Which brings us back to the CDC’s Active People, Healthy Nation initiative. It will be difficult, if not impossible, to get more people active and healthy if our streets remain dangerous. Outdated federal guidelines that prescribe street designs that resemble high-speed highways are a major reason that people keep dying, and this remains a major obstacle to the more active, healthier nation the CDC and partners are striving toward.