The Complete Streets Consortium Series works with three regions in the same state to improve interagency collaboration, create a peer-learning network, and identify strategies to overcome common barriers to Complete Streets implementation. We held our first workshop in Chattanooga, TN last October where we laid the groundwork for the rest of the series. Last month, we reunited with the teams from the Chattanooga, Knoxville, and Nashville regions for our second workshop in Nashville.

The second workshop focused on strategies to better collaborate across jurisdictions. Over the course of our two days together, we met with guest speakers from state agencies, acted out role-playing exercises, and visited a case study corridor that connects suburban areas to Nashville’s downtown core.

In fitting with the collaboration theme, we were joined by the regional Healthy Development Coordinators (HDCs) from the Tennessee Department of Health who help bridge the gap between the health and planning sectors. Across Tennessee, they advocate for programs that incorporate health into the built environment, including Complete Streets. They worked with our teams of engineers, planners, and other transportation professionals to develop a list of shared goals, strategies, and performance measures that address the connections between health and transportation. 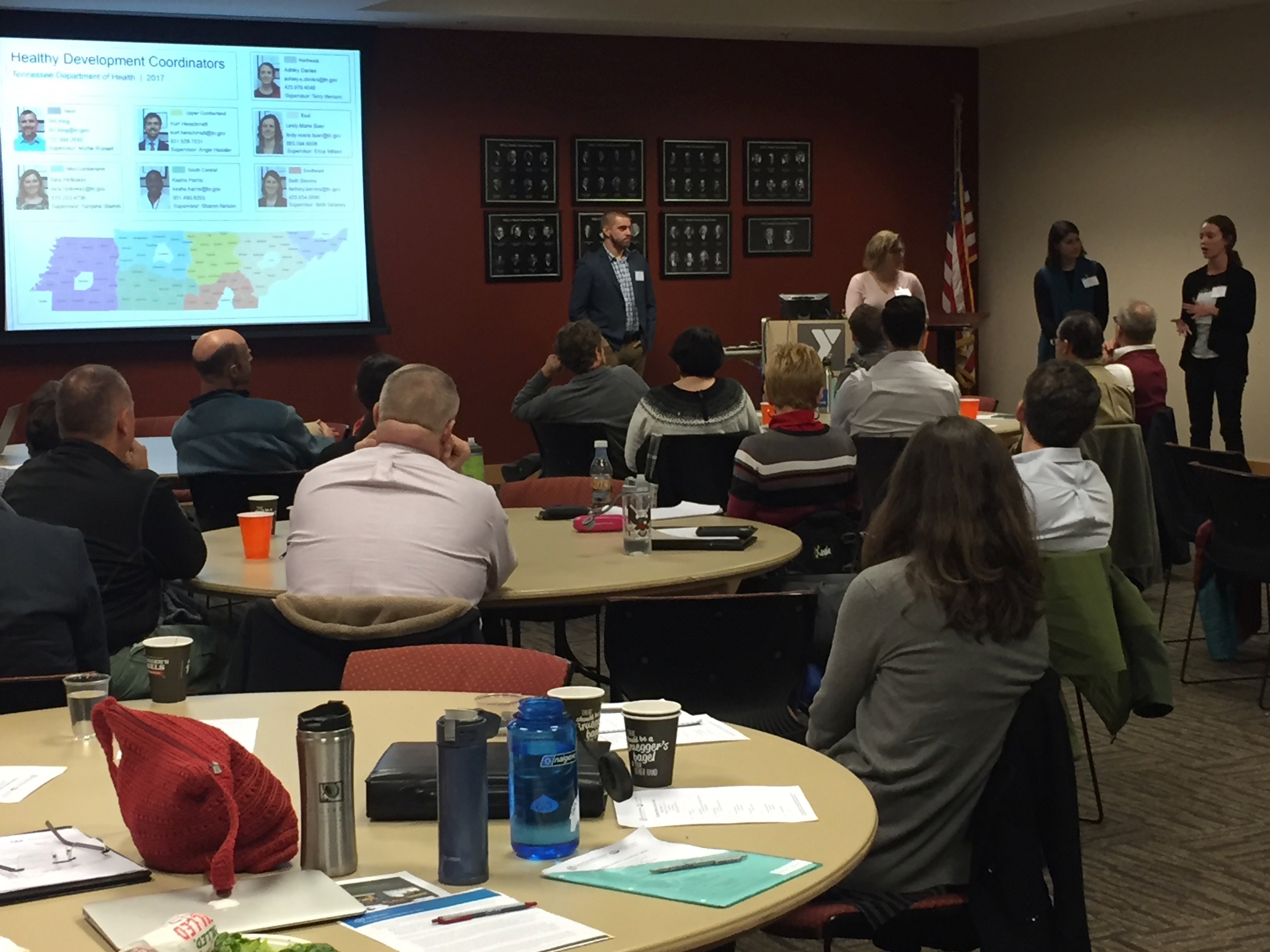 This workshop also featured a presentation by Deputy Commissioner Toks Omishakin of the Tennessee Department of Transportation. Omishakin spoke about the state’s brand new Multimodal Project Scoping Manual, which covers best practices in project development and design for people walking, biking, riding public transit, and more. He also shared advice on how city and state transportation agencies can more effectively work together to balance local and regional priorities and advance Complete Streets.

In addition to working with state agencies, we also discussed ways to get the community involved in Complete Streets. Ben Stone, Director of Arts & Culture at Transportation for America, shared examples of projects around the country that empowered local artists, business owners, and neighborhood associations to play a role in creating safer, healthier streets, including Nolensville Pike in Nashville.

To bring all of these pieces together, we wrapped up day one with a role-playing exercise—a mock public hearing on a hypothetical Bus Rapid Transit (BRT) project. Our mock hearing touched on some very real questions being debated today in Nashville, where voters will decide in an upcoming ballot referendum this May whether to invest over $5 billion in regional transit expansion, including BRT and light rail. Everyone took on a new identity for the exercise. Some of us played planning and engineering staff from the city, suburb, or state. Others acted as advocates, transit agency staff, or business owners. We also had some very convincing portrayals of community members who ranged from transit-dependent and supportive of the project to entirely opposed to any changes. As you can see, we were very committed to our characters: 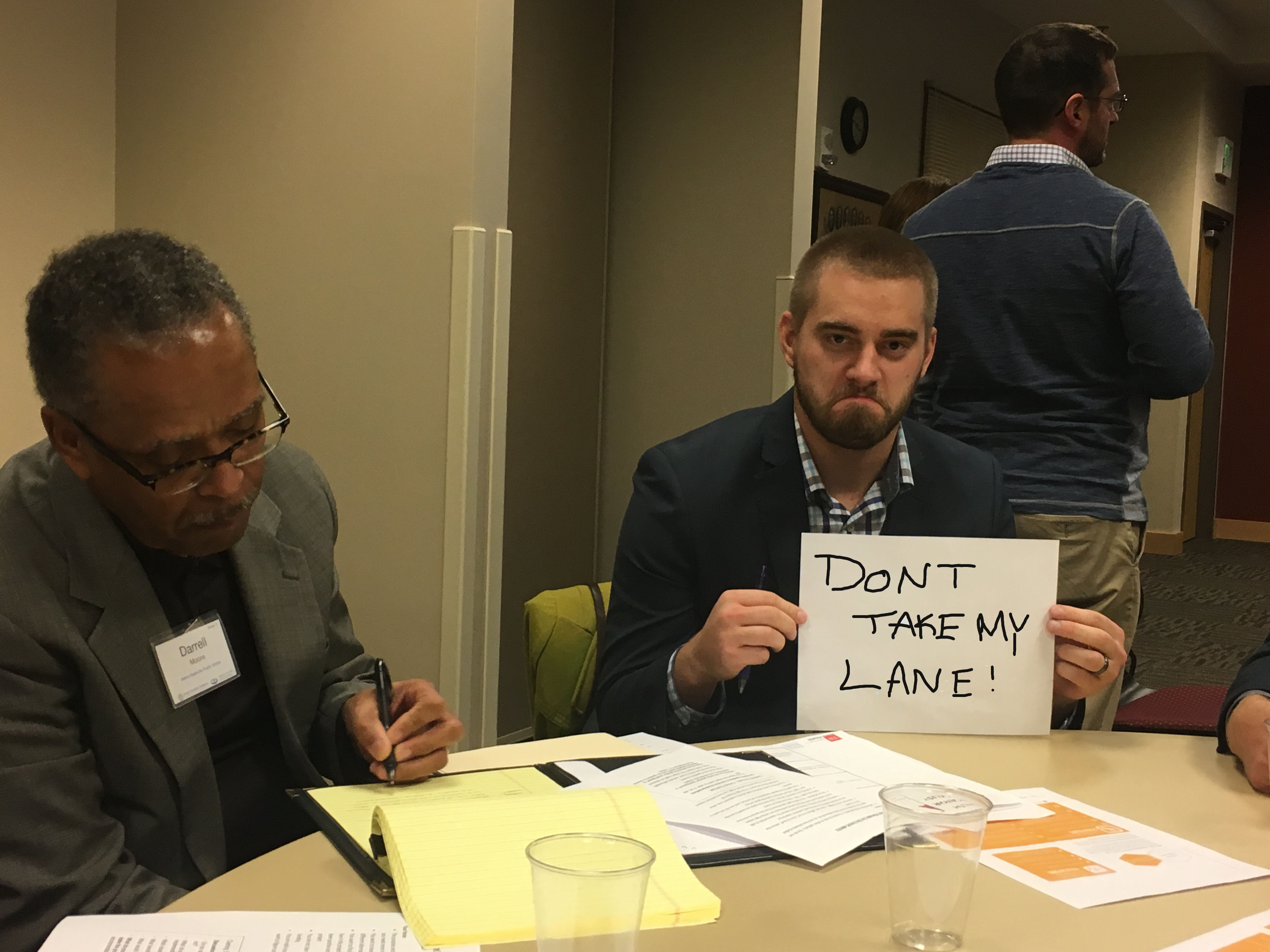 By the time we embarked on our suburban case study in day two, we had all gained a great appreciation for the wide range of competing priorities and perspectives that go into transportation projects, especially projects that cross city lines. We rode Nashville’s BRT-lite bus line out to Charlotte Pike, where we noticed lots of missing connections, especially for people walking—sidewalks and crosswalks were few and far between, even at bus stops and the entrances to shopping centers. This is a recurring problem in Nashville where nearly two-thirds of the city’s streets lack sidewalks. Although the city is working to address this issue, it still has a long way to go. #CompleteStreets are about network connectivity. Sidewalks that lead to nowhere can’t help people get where they need to go pic.twitter.com/udl8zjqBRT

When we returned from our site visit, we worked in teams to brainstorm improvements to the corridor and balance conflicting priorities including: safety for people walking and biking, rapid mobility for people commuting downtown, and accessibility for people riding public transit. The exercise helped cement many of our conversations about multi-agency collaboration and emphasized the challenge and importance of working together to improve the transportation network. This kind of collaboration is what the Consortium Series is all about! We’ve really enjoyed watching our teams develop closer working relationships across departments and jurisdictions, and we’re excited to return to Tennessee this month for our third and final workshop in Knoxville. Stay tuned! —
This technical assistance is funded through a grant to Smart Growth America from the U.S. Environmental Protection Agency’s Office of Sustainable Communities under their Building Blocks for Sustainable Communities program; the Centers for Disease Control and Prevention have partnered with EPA through this grant to support the Complete Streets Consortium Workshop series. EPA’s Building Blocks program funds quick, targeted assistance to communities that face common development problems. Through the program, Smart Growth America has already provided free assistance to more than 85 communities across the United States from Hawaii to Maine.