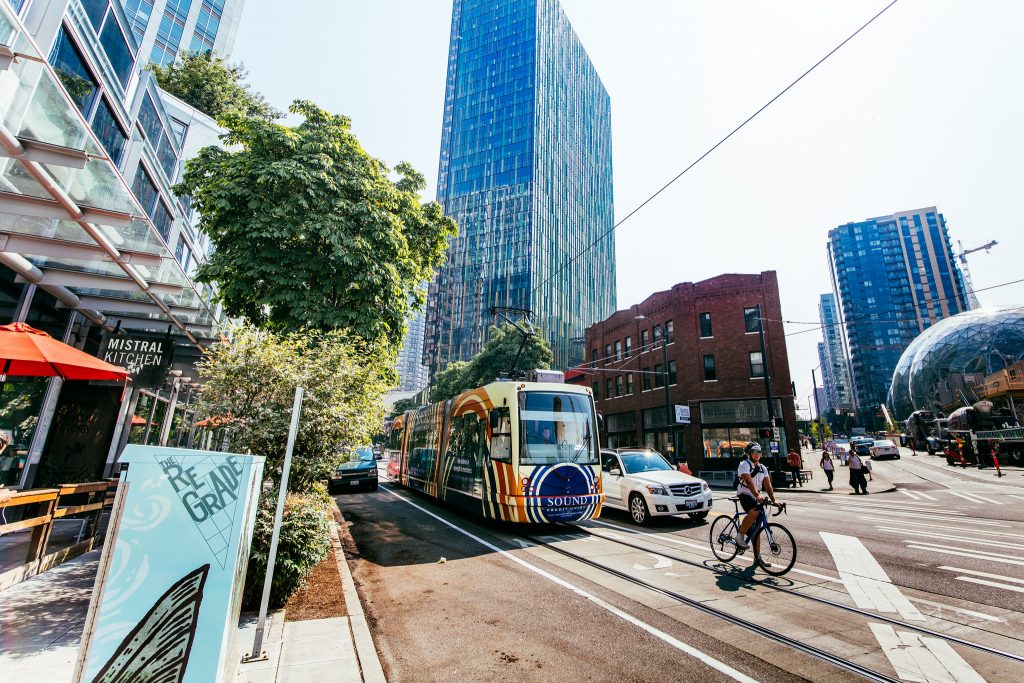 Amazon dropped a bombshell earlier this week when they announced that they’re going to expand from Seattle by building a brand new second headquarters in another city. Based on their RFP, regardless of where they land, it’s another example of how companies are increasingly seeking out vibrant, walkable, connected urban places as they try to attract and retain talent.

In his State of the State address last week, Governor Andrew Cuomo outlined ambitious plans to spur economic growth in upstate New York, and called for a push to revitalize the region’s struggling downtowns. One of his reasons for focusing on downtown revitalization specifically? Companies across the country want to be located in walkable neighborhoods—as Smart Growth America outlined last year in our report Core Values: Why American Companies are Moving Downtown.

Yesterday we released new research all about companies that are moving to walkable downtowns. Core Values looks at why companies want to be in walkable places, and what they look for when choosing these locations.

To kick off this research and to hear more about the issues firsthand, we invited representatives from three companies included in our survey to join us in Washington, DC yesterday for a panel discussion. If you weren’t able to watch the live stream of the event, a recorded version is now available above.

In 2010, global biotechnology company Biogen moved its offices from downtown Cambridge, MA, to a large suburban campus in Weston, 25 minutes away. In 2014, less than four years later, the company moved back.

“There is so much going on in Cambridge,” said Chris Barr, Biogen’s Associate Director of Community Relations. “It is such a vibrant place to live and work—it’s been a great move back for us.”

Biogen is one of hundreds of companies across the United States that have moved to and invested in walkable downtowns over the past five years. Our newest research takes a closer look at this emerging trend.

Core Values: Why American Companies are Moving Downtown is a new report released today by Smart Growth America in partnership with Cushman & Wakefield and the George Washington University School of Business’ Center for Real Estate and Urban Analysis. The new report examines nearly 500 companies that moved to or expanded in walkable downtowns between 2010 and 2015, and includes interviews with more than 40 senior-level staff at those companies.

The results provide an overview of why these companies chose a walkable downtown and what they looked for when considering a new location. The report also includes ideas for cities about how they can create the kinds of places these companies seek.

Over the past five years, hundreds of companies across the United States have moved to and invested in walkable downtowns. Why did companies choose these places? And what features did they look for when picking a new location?

Core Values: Why American Companies are Moving Downtown is new research coming out on June 18 from Smart Growth America in partnership with Cushman & Wakefield and the George Washington University School of Business’ Center for Real Estate and Urban Analysis.