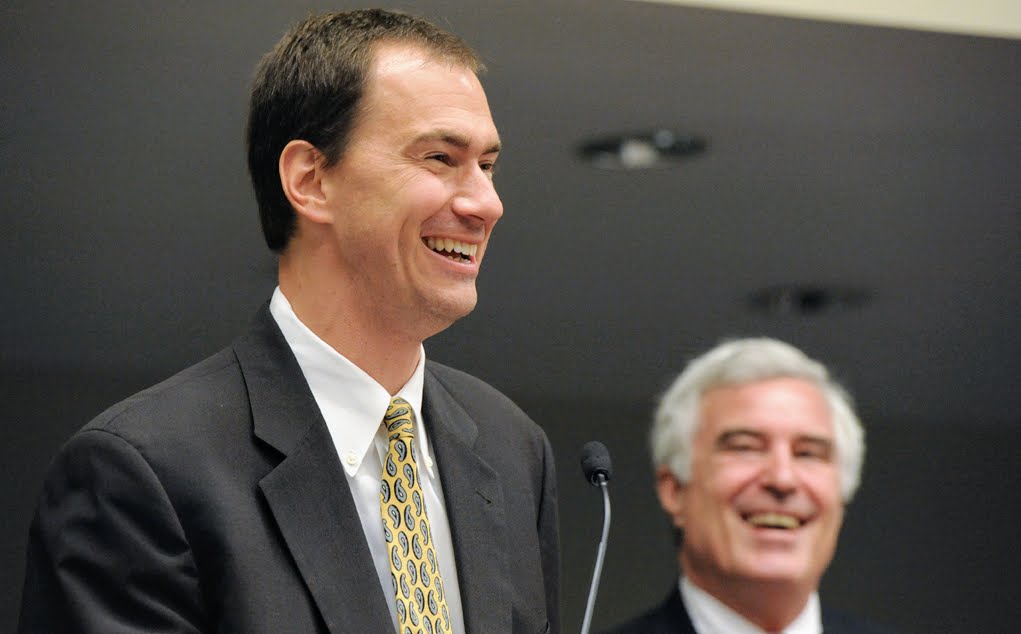 Read the final end-of-year letter from Smart Growth America President and CEO Geoff Anderson as he wraps up this year of work and prepares to depart SGA in early 2018.

Smart Growth America President and CEO Geoff Anderson testified before the Senate Environment and Public Works Committee last week at a hearing titled “Cleaning Up and Restoring Communities for Economic Revitalization.” Joining him were Mathy Stanislaus, Assistant Administrator at the Office of Solid Waste and Emergency Response at the U.S. Environmental Protection Agency (EPA), the Honorable Debbie O’Malley, Bernalillo County Commissioner from New Mexico, and Dr. Kendra Kenyon, President of the Idaho Council of Governments.

Yards Park in Washington, DC was built on the site of a former brownfield. Photo via Flickr.

Geoff Anderson, President and CEO of Smart Growth America, will testify before Congress this afternoon in favor of the BUILD Act, a bipartisan plan for helping communities clean up old brownfields (polluted former industrial sites) and abandoned land, and return them to productive use for communities across the country.

The testimony will be before the Senate’s Environment and Public Works Committee at 2:00 PM today, as part of a hearing titled “Cleaning Up and Restoring Communities for Economic Revitalization.” The hearing will likely be viewable online as a stream. for a link on the Committee’s website later this afternoon.

Smart Growth America President and CEO Geoff Anderson will testify before the Senate Committee on Environment and Public Works next week to discuss the Brownfields Utilization, Investment, and Local Development (BUILD) Act.

If passed, the bill would help communities across the country clean up contaminated and abandoned land and put it back into productive use.

“The BUILD Act is a win for everyone—Congress, local governments, business owners and taxpayers,” said Anderson in March, when the bill was introduced. “Brownfields restoration drives economic growth while giving local governments the flexibility to pursue the projects they need the most. Transforming a community’s financial sinkhole into a new business or residential building is a no-brainer.”

Q: What is the state of smart growth at a time of slow growth and economic stagnation?

Geoffrey Anderson: Smart growth is gaining traction, particularly if you look over a 15-to-20-year perspective. If you think back to the mid-’90s when cities were almost assumed to be dead — relics of a past age that were overtaken by the domination of auto-oriented suburbs — the contrast between that view of walkable neighborhoods, of smart growth and what we see today, is striking by any measure, and nowhere more so than how the market views it. There was a lot of skepticism among the private sector that this was something people wanted, and now it’s practically a given by a lot of the development community.

Anderson: We’d be fools to discount the impact of changing demographics. The difference between the 1960s, when half the households had kids and today’s (is that) it’s 30 percent and headed downward — you can’t overstate that difference in the population. We’ve built up a regulatory, financial and development infrastructure to serve that market. Look away for a second and it’s changed, and we forgot to change with it.

Q: How has smart growth played out in the real estate recession?

Anderson: Part of what we’ve learned is where we have really overbuilt. Virtually every place around the country forms a concentric circle. Moving out, values have been dropping. You see center areas and walkable areas holding values best, and large-lot, drive-only places are losing value.

In 2000, the average resident of Birmingham, AL drove 34.8 miles each day, and only 2% of residents took transit or walked to work. Now, Birmingham is looking to change these trends and asked Smart Growth America for ideas about how to do it.

The Regional Planning Commission of Greater Birmingham invited Smart Growth America President and CEO Geoff Anderson and LOCUS President Chris Leinberger to come to Birmingham last week to speak about smarter growth. In a joint presentation, Anderson and Leinberger discussed new trends in neighborhood design and what they could mean for Alabama.

When the housing bubble popped in 2009, it left many American communities with foreclosed and vacant homes and businesses.

U.S. Senator Ben Cardin (D-MD) yesterday introduced legislation to prioritize spending on highway repair and preservation for the benefit of America’s drivers, state budgets and the federal funds that support the country’s major roads. The “Preservation and Renewal of Federal-Aid Highways Act” will ensure adequate and consistent investments in the country’s existing transportation infrastructure, a strategy in line with Smart Growth America and Taxpayers for Common Sense’s recent report Repair Priorities: Transportation spending strategies to save taxpayer dollars and improve roads.

Geoff Anderson, President and CEO of Smart Growth America and co-chair of the Transportation for America campaign, issued the following statement:

“With this legislation Senator Cardin has proposed an approach to highway spending that is fiscally responsible for both states and the federal government, and Smart Growth America applauds him for taking action in the face of the significant financial threat posed by decades of neglected road repair.

“Roads in many states are falling in to disrepair and these declining conditions cost taxpayers billions of dollars in preventable expenses. Even worse, many states continue to expand their road networks at the cost of regular repair, and with each dollar spent on expansion states add to a road system they are already failing to maintain.

“Senator Cardin’s proposal incorporates many of Smart Growth America’s recent recommendations, including establishing national standards for state-of-good-repair, encouraging states to invest proportionately more of their transportation dollars in repair, rather than expansion, and taking proactive steps to addressing the country’s backlog of road repair needs. As the Senator said in his statement about the proposed bill, investing in repair makes good fiscal sense, good safety sense, and good business sense for our country and we look forward to supporting this bill as it moves through Congress.”