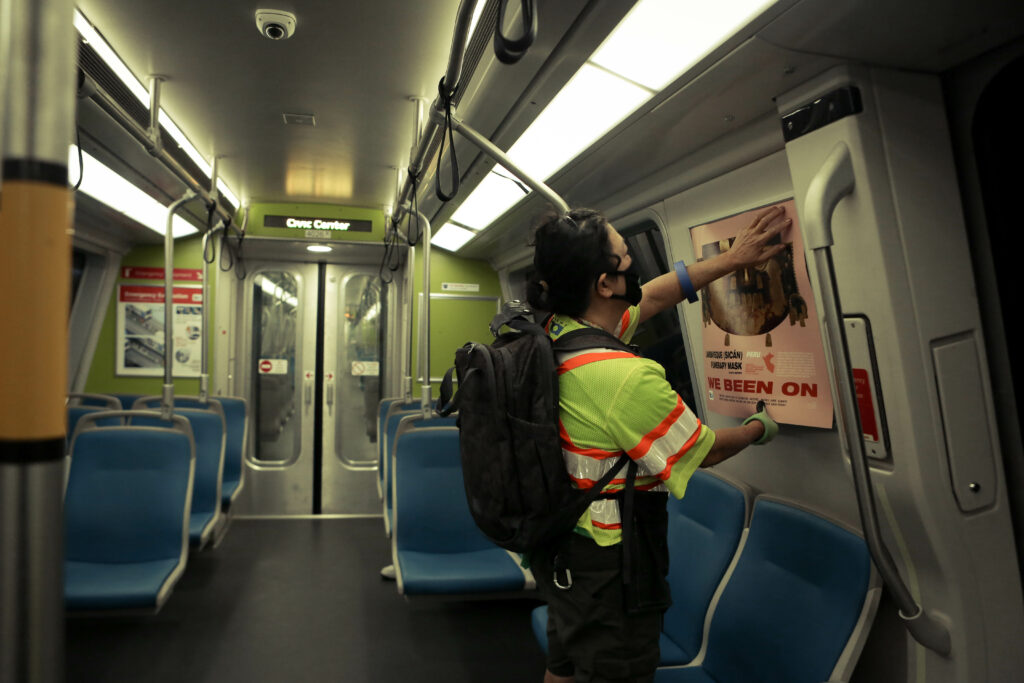 Bay Area Rapid Transit worked with artist Tosha Stimage to pilot an approach to normalize the culture of wearing a mask on transit and deconstruct the racism worsened by COVID-19.

This post is the sixth in a series of case studies about Complete Streets people, places, and projects. Follow the full series over the next several weeks.

If you’ve walked along Del Paso Boulevard in Sacramento, CA in recent years, you may have noticed horses imprinted on the street’s brickwork. The bricks are a tribute to the area’s ranching history — and a sign of a modern commitment to safety for everyone using the street.

Between 1844 and the early 1900s, in what is today North Sacramento, sat over 40,000 acres of Del Paso Ranch. The ranch’s ownership passed through several hands before it purchased by James B. Haggins, a Kentucky native who earned his fortune in copper mines and railroads. Haggins raised more than 1,000 thoroughbred horses at Del Paso Ranch, including, according to one source, the first Californian horse to win the Kentucky Derby. In 1905, when Haggins announced that he was leaving horse breeding because he was operating at a loss, a New York Times headline proclaimed that that his stock farm was “the Greatest Nursery of Thoroughbreds in the World.”

An improved storefront in Soldotna, AK. Photo courtesy of City of Soldotna.

It is often hard to quantify what makes a place memorable, successful or special, but to paraphrase an old adage, “You know it when you see it.” Some urban planners have described placemaking as the deliberate re-shaping of the built environment to facilitate social interaction and improve quality of life. While there is no universal blueprint for creating great places, there are successful examples worth noting, especially given the numerous benefits that come with great placemeking.

Placemaking improves the physical, psychological, health and public safety aspects of a community. Creating attractive places where people want to be increases foot traffic and helps support the local economy, which is critically important. Interesting places with more community interaction also reduce crime and instill a sense of identity to a neighborhood. So, how does good placemaking happen? The following examples from Philadelphia (PA), Soldotna (AK) and Orlando (FL) showcase three approaches on different scales, achieved by different means.