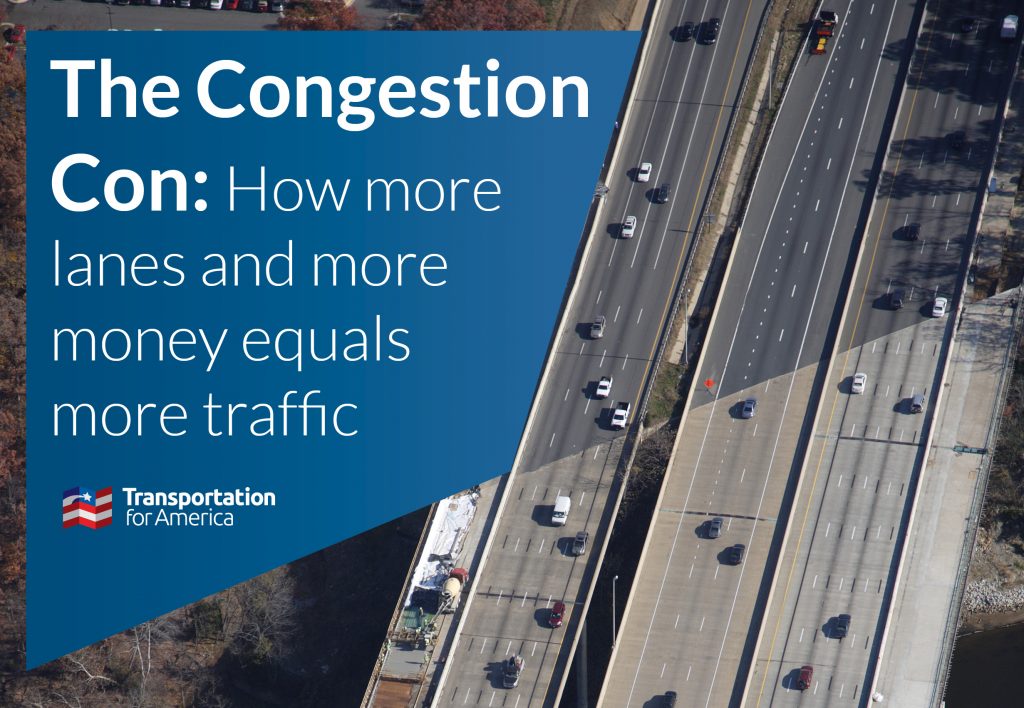 In an expensive, decades-long effort to curb congestion in urban regions, our transportation agencies and elected leaders have overwhelmingly prioritized spending hundreds of billions of dollars to widen and build new highways. Yet this strategy has utterly failed to “solve” the problem at hand, and in many cases, has actually made it worse. The Congestion Con, a new report from our Transportation for America program, examines how and why, and in this post we look at how land use is right in the middle of it all.

David LeBlanc started slugging in 1997 and has been doing it ever since. He’s such a strong slugging supporter that he wrote a short guide and system map for users and now runs the Slug Lines website which is dedicated to the idea.

“Slugging” is an innovative, grassroots form of commuting in Washington DC and Northern Virginia that helps commuters get in and out of the city easily and efficiently. High occupancy vehicle (HOV) lanes, which require two or more passengers to use, provided the inspiration: drivers who would like to use the more efficient lanes pick up passengers – nicknamed “slugs” – and passengers, for their part, get a free and easy ride into the city. People almost always ride with strangers, but there’s a thriving community of devoted “sluggers.”

No one regulates or manages slugging; it’s a grassroots community of commuters who create carpools on the fly. A few other cities around the country have tried it to varying degrees, but it’s uniquely successful in the DC metro area. No one has ever conducted a formal survey or tally, but in 2007 the Virginia DOT pegged the number of daily sluggers at approximately 10,000 commuters.

LeBlanc visited Smart Growth America’s headquarters this week to discuss some of the frequently asked questions about slugging.

A new report out today from CEOs for Cities criticizes the Travel Time Index, an annual scoring of metropolitan areas and their congestion. The Index for each urban area in the US is released annually as part of the Texas Transportation Institute’s Urban Mobility Report and heavily influences decision-makers looking for solutions to traffic congestion. … Continued

If you’ve been around the conversation on growth and development for any amount of time, you’ve undoubtedly heard someone bring up Arlington, Virginia. Arlington is the bit of Virginia just across the Potomac River from the monumental core of Washington, DC that leveraged the arrival of two Metro rail lines in the 60’s and 70’s to renew and revitalize their county into a prosperous, enjoyable and livable community that is a sought-after destination for employers, businesses, residents and visitors.

This video comes to us from Sightline up in the Pacific Northwest. I’d summarize it myself, but Sightline’s Eric de Place does it better himself: It’s difficult to illustrate the opportunities that are available now on our roads. We don’t need big expensive building projects, just smarter systems that protect both our pocketbooks and our … Continued

Gas prices are up. People are turning to transit in record numbers these days. But as you probably know, not everyone has access to a decent public transportation system, and many current systems are woefully underfunded or neglected, much like the rest of our national infrastructure. The U.S. Public Interest Research Group (US PIRG) sent … Continued

If once is an accident, twice is a coincidence, and thrice a trend, where are we now? More evidence continues to roll in that the high costs of fuel are pressing more and more Americans towards making lifestyle changes to reduce their consumption. Two stories over the weekend, one in the New York Times and … Continued

The situation: Bridges are falling down, traffic congestion is worsening, gains in fuel efficiency are reducing gas tax revenues, worthwhile transit projects are sitting on the shelf, and the Highway Trust Fund — funded by the 18.5 cents a gallon gas tax that is already inadequate for funding transportation investments — is about to run … Continued

As you may have read this morning in numerous other outlets, New York City’s plan to implement congestion pricing in Manhattan was defeated last night without reaching a vote on the floor. [NYT] The plan would have charged most cars $8 and trucks $21 to enter traffic-choked Midtown and Lower Manhattan during busy hours on … Continued

As we’ve highlighted this week, Growing Cooler: The Evidence on Urban Development and Climate Change is out in its final, sharp-looking book form. Released in a preliminary technical form last fall, the book has been revised, updated, and published as a beautiful hardcover book, replete with informative graphics, pictures and illustrations. The crux? It will … Continued