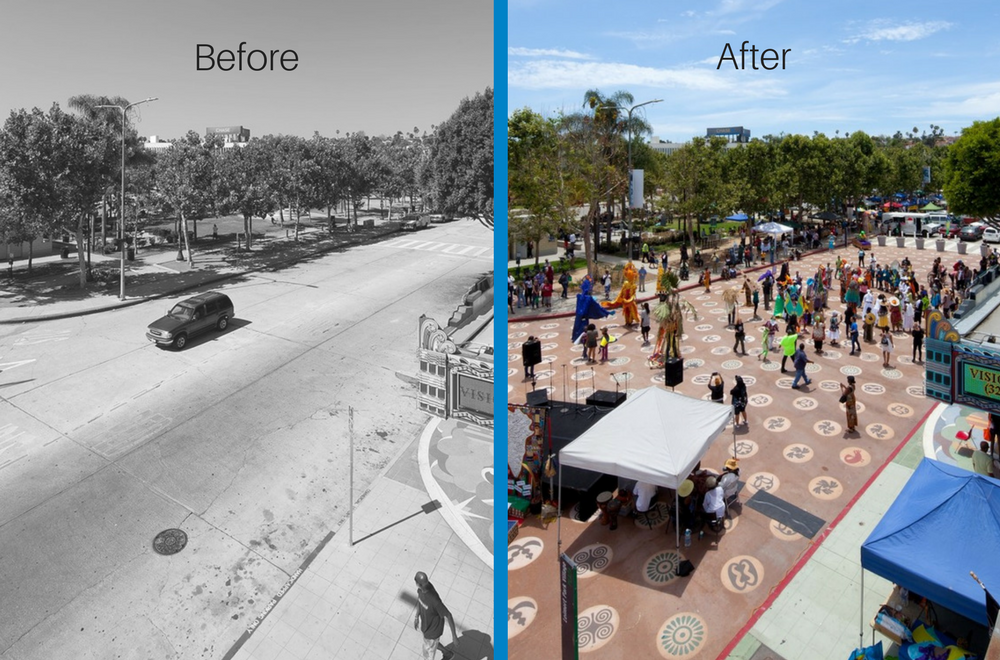 Janette Sadik-Khan spent six years spearheading some of the most pioneering approaches to people-first street design while leading the transportation department for in America’s most populous city. She’ll be bringing that experience and more to Intersections: Creating Culturally Complete Streets as a keynote speaker in April.

New York is the densest and most walkable city in the country. But just a few, relatively small walkable urban places—or WalkUPs—are responsible for an outsize percentage of the region’s population, employment, and GDP.

How do these WalkUps compare economically and socially to the region’s drivable suburban communities? What challenges will New York’s WalkUPs likely face over the next 20 years, and what can policymakers do to address them?

On April 4, 2017, the George Washington University’s Center for Real Estate and Urban Analysis (CREUA) will answer these questions when they release The WalkUP Wake UP Call: Metro New York City. The report will include for the very first time a nearly 100 percent census of all real estate in the New York metro area as well as an analysis of growth trends in the region.

Beltline a walk in the park
Atlanta Journal-Constitution (GA) – October 13, 2012
On Monday, Mayor Kasim Reed will dedicate what city officials are calling “the most significant step forward yet” in the long-awaited Beltline, a projected 22-mile loop in central Atlanta built upon abandoned railway corridor.

As gas prices soar, city cycling more attractive
Associated Press via San Francisco Chronicle (CA) – October 13, 2012
Statewide, Californians are increasingly pumping air into the flat tires on their dusty old bikes instead of gas into their tanks. Recent historic spikes in gas prices are expected to stay high, forcing many to look at their gas guzzling minivans and SUVs in a new light.

Trulia Throws Cold Water on ‘Death of Suburbia’ Argument
Wall Street Journal – October 12, 2012
On Page One of Wednesday’s Journal, we wrote about a museum in Kansas that caters to America’s undying fascination with suburbia. Merits of the museum aside, the article highlights a persistent theme in American culture that has fascinated demographers, urbanists and especially home buyers for several generations: the question of whether or not the suburbs are alive and well or hollowed-out and dying.

Firms shifting from suburbs to downtown
Minneapolis Star-Tribune (MN) – May 19, 2012
The allure of the big city is pulling at businesses that previously called suburban office parks home.

A 2008 survey found that 77 percent of Millennials – the generation of 20-somethings – want to live where they are “close to each other, to services, to places to meet, and to work, and they would rather walk than drive.”

New Jersey, with its extensive rail transit network and “streetcar suburbs” with pedestrian-friendly downtowns that surround many of their stations, is well poised to take advantage of the rise in demand for this walkable urbanism.

The New Divide: Walkable vs. Drivable
New Jersey is an anomaly among the 50 states in that it is highly urbanized yet lacks a major center city to claim as its own. The state’s home-grown urban centers all live in the shadows of their much larger neighbors, New York and Philadelphia. In fact, New Jersey is widely perceived as consisting mainly of suburbs serving these two cities, even if many of its small towns do not fit the low-density, single-use stereotype of a “suburb.” The distinction, however, between city and suburb as the defining paradigm for describing the built environment is giving way to a new dichotomy: walkable urbanism versus drivable sub-urbanism. New Jersey is well positioned to take advantage of this change.

The bold urban future starts now
Salon, December 31, 2011
In cities in every region of the country, pie-in-the-sky ideas are moving from brainstorm to blueprint to groundbreaking — and 2012 will prove it.

Oklahoma City reaps positive effects of economic development
The Oklahoman, January 1, 2011
“Downtown Oklahoma City experienced significant changes this year (2011), but probably the most impactful was the renovation and grand reopening of the Myriad Gardens,” Jenkins said. “Construction of the Level Apartments and Aloft Hotel in Deep Deuce have really given that area a dense, urban feel, and the launch of the ‘Downtown It!’ advertising campaign increase awareness of all that downtown Oklahoma City has to offer.”

Study: Cities subsidize townships
Oxford Press (Ohio), January 2, 2012
There is an inequity in government subsidies for roads, police protection and other services that township residents receive compared with city residents, though both groups pay the same taxes, a University of Toledo study shows.

Champion of Cities
Wall Street Journal, June 23, 2011
Chairing the City Planning Commission since 2002, Burden, age 67, has revolutionized its role in the city, transforming a once-sleepy bureaucratic agency into an activist department championing good design by using zoning as a weapon to enforce her vision. In her second-floor office near New York’s City Hall, she reviews applications for all new buildings that come before the commission, instructing developers and architects on what they can and cannot do—something that comes as a dramatic shift in the order of business to executives accustomed to getting their way.

Committee Poised to Introduce Transportation Bill
Journal of Commerce, June 23, 2011
Leaders of the Senate Environment and Public Works Committee are ready to introduce a new surface transportation bill, but want a commitment from the Senate Finance Committee to find a way to pay for it, a Capitol Hill source said this morning. The committee will propose a two-year transportation bill that will cost $12 billion more than anticipated revenue from the Highway Trust Fund. Committee leaders believe it has a better chance of passing than the traditional six-year bill.

Group working across state to aid vacancies
The Newark Advocate (Ohio), June 26, 2011
Smart-growth advocate Greater Ohio has been pushing for redevelopment of abandoned properties and keeping vacant properties from blight through policy and code enforcement. They’ve put the housing stock of Akron, Youngstown and other large cities under the microscope, but Lavea Brachman, executive director, said the same basic strategy applies for a mid-sized or small city.

Cleaning the Central Corridor in St. Paul, courtesy of the EPA
Twin Cities Daily Planet, June 24, 2011
The construction-burdened Central Corridor can seem like a messy ordeal to drivers, walkers, bikers, and bus riders, but a cleaner future lies ahead. University Avenue property owners in St. Paul could receive aid to get the ball rolling on future developments due to a $1 million grant awarded through the EPA’s Brownfield Program.

The City and Bikes: Rubber Meets Road
Wall Street Journal, June 22, 2011
Spring was a little shrill and embarrassing. There were crazed media furies about bike lanes, non-stop reports of police crackdowns, hyperbolic worries that the city was transforming into an effete Euro village. If we didn’t defend our streets, the cyclists would overtake Manhattan. Mayor Bloomberg and Department of Transportation commissioner Janette Sadik-Khan would open a leg-shaving station in Union Square…But then a funny thing occurred. It got warmer, more people started riding, and the mania was eclipsed by reality.

Carroll officials take stand on growth, transit, immigration
Baltimore Sun, June 22, 2011
Public prayer is just one of the issues that is defining this five-member, all-Republican board, all but one a newcomer to governance. They were swept into office on the tea party wave last year after a campaign that emphasized property rights and an opposition to many environmental initiatives, affordable housing and public transportation in a county where more than half the workforce commutes to jobs outside its borders. “We don’t want subways or metro buses,” said Richard Rothschild, one of the new commissioners. “They are conduits for crime. That’s not politically correct, but it is factually substantiated.”

Is a housing construction boom coming?
The Atlantic, June 22, 2011
You might think the question posed in the headline above sounds crazy. Aren’t foreclosures very high and thousands of distressed properties hitting the market each day? Didn’t residential construction go bonkers during the housing bubble in an epic overbuilding binge? The answers to these questions are: sort of, but it’s complicated. After the bubble popped, home construction fell to historic lows and stayed there. As a result, we may be on the verge a housing shortage in the U.S., which would actually be very good news for the economic recovery.

CNBC released its list today of the top 10 most walkable cities in America, and includes in it a discussion of the growing trend among towns and cities to create neighborhoods with pedestrian-friendly streets and bustling downtown shopping districts. These features are a key part of smart growth development strategies and, as CNBC writer Cindy Perman explains, walkable neighborhoods have benefits beyond street-level charm. Walkable neighborhoods feel safer and more social, and help build exercise into daily routines. But even more importantly, walkable neighborhoods bring economic benefits:

You wouldn’t spend much time hanging around in the parking lot of a strip mall in a car-dependent suburb. But, you would linger in a very walkable city, which means you’re more inclined to spend more. Quite a bit more, in fact. The Urban Land Institute studied two Maryland suburbs of Washington, DC, one walkable and one not. They found that the Barnes & Noble book store in the walkable suburb made 20 percent more in profits than the one in the driving-dependent suburb.

“We call that a place-making dividend,” McMahon said. “People stay longer and come back more often and spend more money in places that attract their affection.”

There’s an economic benefit for homeowners, too: Homes in walkable cities hold their value better than those that were heavily reliant on driving, according to Smart Growth America, a group that promotes “smart growth” instead of suburban sprawl.